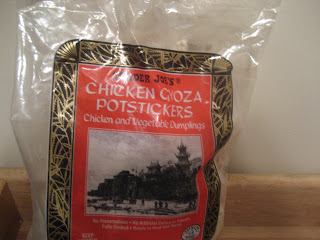 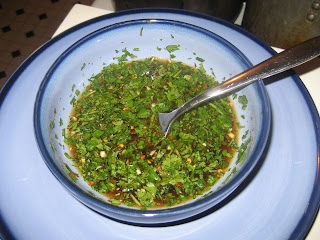 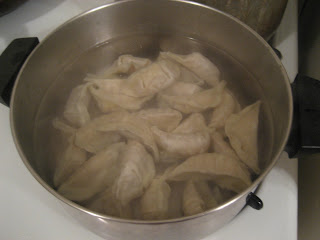 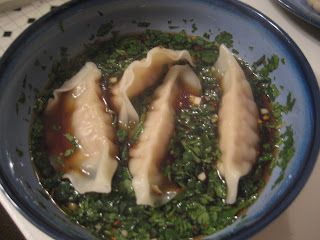 While watching last night's epic, 12 inning, 5 hour 19 minute Angels-Red Sox game, I was too nervous to eat anything. But my friend was getting hungry. I thought making some food might distract me from feeling like I wanted to throw up every time one of the Angels struck out looking (which was frequent,) but I also didn't want to be doing something with hot oil, a blender, a mandoline, or anything else that could cause permanent disfigurement while I was in such a mood. (Last year when Manny Ramirez hit that disgusting walk-off home run in Game 2 where he paused for 45 seconds to admire the flight of the ball, I threw my phone down in such anger that it broke into 20 pieces.)
-
So I mixed up a sauce of soy sauce, water, sugar, rice wine vinegar, chili flakes, chopped cilantro, and crushed garlic. I took a bag of frozen Trader Joe's Chicken Gyoza Potstickers out of the freezer. I make these frequently but always by searing them with oil in a pan then adding some water and letting them cook that way. But, as I said, I didn't want to heat any oil, I was just looking for the easiest way to cook them. So I boiled them.
-
The texture was a little too rubbery when they came out of the water, but when bathed in the sauce for a couple minutes they took on a better flavor. It was a decent meal, but the potstickers are definitely much tastier when they are not boiled.
Posted by JustinM at 2:27 PM