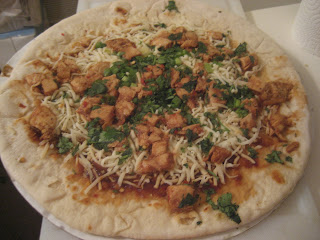 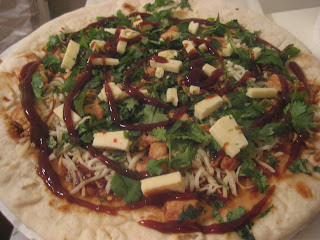 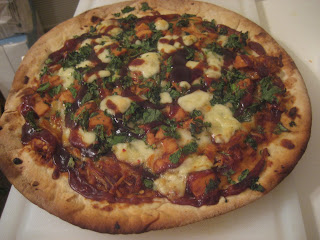 When I was young, Saturday trips to Bristol Farms were frequent. Whether it was to pick up cold cuts for a pre-UCLA game picnic at the Rose Bowl, or because my parents were having people over to their house and wanted higher quality stuff (this was before there was a Whole Foods in Pasadena,) Bristol Farms was always the go-to place when we were buying something we could not get at the local grocery store.

One of the things I liked there was their barbecue chicken pizza. There were a couple years in my teens when that was my favorite food in the world. I was never a big fan of the one at California Pizza Kitchen, although Crocodile Cafe and Avanti were (and still are) two of my favorites. The first food I remember cooking myself was a barbecue chicken pizza, when I was about 14. (I shudder when I remember how I made it: I used Pillsbury pizza dough, and cooked the chicken in the oven for 45 minutes in a pan full of Kraft barbecue sauce.)

It had been several years since I had eaten one of Bristol Farms pizzas, though. Possibly more than a decade, so I decided to give it another shot. When I unwrapped it I was not impressed: it seemed to have a lot less toppings than I remember. Now, it's entirely possible that this is yet another of those things that I remember as being more substantial than it was. (Other things I returned to recently for the first time since I was a teen and found to be much smaller than I remembered are the burger at Pie 'n Burger, the Harbor House Cafe in Sunset Beach, and the Los Angeles County Arboretum. I'm sure we all have our lists; what's yours?)

Luckily, I had some things in the fridge. I added more barbecue sauce, lots of chopped cilantro, and some pepper jack cheese. I was quite pleased with the final results.
Posted by JustinM at 2:04 PM