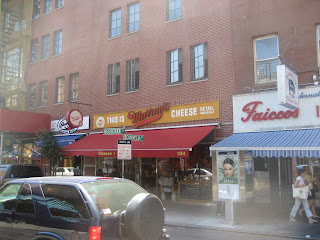 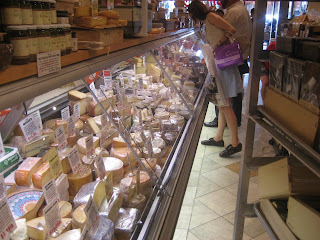 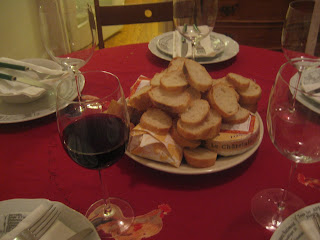 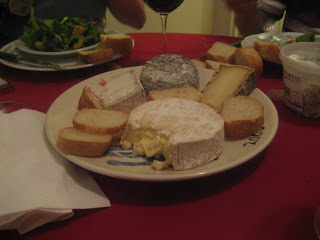 I love cheese. There is no occasion that isn't made a little bit better by a plate of cheese and some bread. Whether it's a pre-UCLA football game picnic in the Arroyo Seco, or wine tasting on the central coast, or even a relaxing evening in front of the television watching baseball, cheese is always good.

There are some great places in the Pasadena area to buy cheese, like the Whole Foods on Arroyo Pkwy, Bristol Farms, or Nicole's Gourmet Foods in South Pas... but nothing that compares to Murray's Cheese Shop in Greenwich Village. They have hundreds of varieties of cheese, from American cheddar to semi-soft cheeses from the Beira region in the middle of Portugal.
I visited Murray's for the first time on my most recent trip to New York. After lunch at John's of Bleecker Street (I was told it was the best pizza in New York; it was not, but it was better than any I have had in California) I walked down the street to Murray's with the idea of picking up some cheese to eat with dinner. Within two minutes of being inside and looking at the long counter, I decided that cheese would not be an accompaniment to dinner, it would be the main course.
I picked up some Le Châtelain (a Camembert from Normandy,) a Danish blue cheese, some Humboldt Fog (a California goat cheese and my favorite cheese made in America,) and another soft cheese, the name of which I cannot remember.
I made a salad and ate the cheese with a sliced baguette. I purchased a bottle of Justin Cabernet; something about drinking a California Cab in New York seemed fun.
Posted by JustinM at 2:41 PM

Cheese, cheese, cheese... Cheese can make most anything better, well maybe that's a bit of an exaggeration… because at this particular moment I find myself loving my job so much that I feel like crying, I’ve decided to divert my attention to J’s Blog about food (thank you hombre for creating this daily escape!) and create a short list of things that cheese makes better, and another listing things that the finest queso on earth couldn’t help:

More Cheese Please:
• Dill pickles out of the barrel at Bill’s Butcher Block in Saugus
• Freshly made tortillas
• Honeydew melon

Get That Cheese Off My Table:
• Our growing economic difficulties
• Godfather 3
• A 1989 Yugo
• The ratings for the upcoming World Series
• My right knee on a cold day

Wow, I thought I’d have more ammo than that… oh well. I’d actually like to take this moment to give a plug to a former client of mine who are simply great folks - California Wine & Cheese in Monrovia… very unpretentious couple who don’t pretend to know everything, but have a very decent selection of about 75 cheeses… Tom & Janet Dugan run the place… hope they hang in there…

Thanks again for the read… oh yeah, I know what I was going to ask (this should really be on the BBQ Blog): Have you ever been to the Bear Pit BBQ off the 118 Fwy at Sepulveda? When I was a wee lad, my pop would take us there every Sunday after church and little-league… I’ve only ordered and eaten one menu item there in 34 years (yikes!!)… The Super Bear sandwich… To quote their menu:
“The Super Bear” Combination Sandwich with Gobs of Luscious, Thinly Sliced BAR-B-Q BEEF AND HAM Served on Our Special Garlic Toast and Choice of Two: Cole Slaw, Bar-B-Q Beans or French Fries…
I’d get that and a chocolate malt… still do. Now I have to admit I dig the hell out of that sandwich but I don’t know if it’s because that “sammy” is any good or I feel like a kid when eating next to the painted cartoon bears on the walls…

Well, I do not know this "J" of whom you speak. My name is Pulled Porker. Commander of the armies of the north, General of the... okay, I'm just being stupid.

I have to second your recommendation of California Wine & Cheese. They are very nice and it is a very pleasant place to sample wine and cheese. If only it were in Pasadena.

Oooh! I've seen this place on TV a few times and it does look mighty inspiring. I too am a fan of everything cheesey and I envy your visit to Murray's.

Hmm... it's not often that a beautiful woman with a beautiful baby who lives in my favorite city in the entire world envies me. This might be the first time, actually.