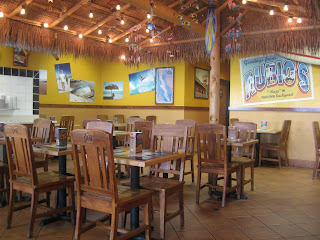 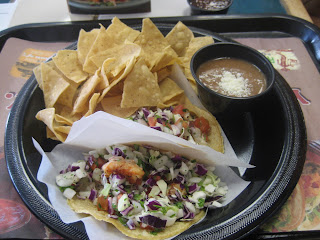 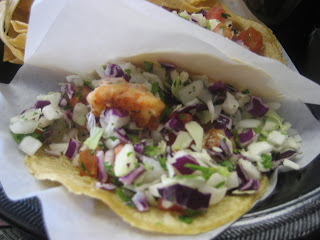 Of all the fast-casual Mexican food chains (Baja Fresh, Qdoba, Sharky's, etc.,) Rubio's is definitely my favorite. Their fish tacos are the best of the bunch, their service is always better, and, most importantly, you can always get a cold Pacifico to have with your tacos.
-
A few years ago my buddy Tom and I planned a weekend trip where we went to three minor league baseball games in 48 hours. Our original plan was to eat fish tacos for every meal. We started on a Friday night in Rancho Cucamonga and ate tacos at Rubio's before the game. We drove all night up to Chico to visit the Sierra Nevada Brewing Company. It took a lot less time than we thought, though, and we got there at 7 in the morning, several hours before they opened. We went to the park and played catch for a few hours and by the time they opened we were so famished that we just ate at the brewery instead of getting fish tacos, and the whole Fish Taco Weekend plan was shot to hell. Still a great time, though.
-
Rubio's has their "Langostino Lobster Tacos" back, so I had to try them. I got the street taco plate, with chips and pinto beans. They were delicious, although there wasn't very much meat in them. (At $4.99 for the plate, I wasn't really expecting a pound of lobster meat.) I don't like pinto beans but I hadn't tried them in years. I thought maybe it would be one of those things I used to hate, like sushi or cilantro, that I would love now. It wasn't. I still don't like them.
Posted by JustinM at 2:55 PM