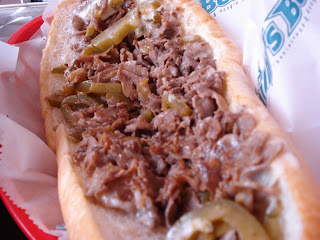 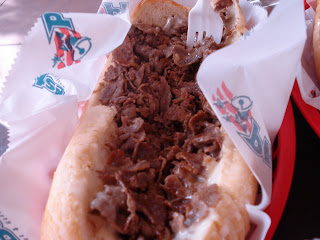 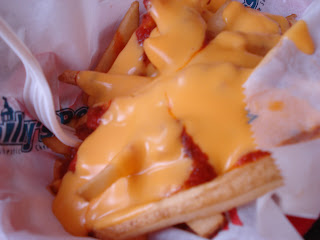 I will never have a better cheesesteak than the one I had one night in Philadelphia. It was the middle of summer, just a couple days after my birthday, and a huge rainstorm had cleared the skies that afternoon. A few friends and I sat outside at a bar near Rittenhouse Square. It was the birthday of one of my good friends, who was going to medical school in Philadelphia. Everyone was buying him drinks and when he announced that he had enough and needed to leave, I bought him one more.
-
He paused for a second and then yelled, quite loudly, "All right, I'll drink it, but if one of my patients dies tomorrow, it's YOUR fault." Every single person on the patio turned and looked at me. (In my memory the music stopped and someone dropped a glass, but I admit that probably didn't really happen.)
-
So I figured it was time for me to go. I wandered about a block away and had a sandwich that I can only describe as a revelation. It was one of the five best sandwiches I have ever had, and perhaps one of the ten best things I have ever eaten. The steak melted in my mouth, the cheese was equal parts horrifying and delicious, and I did not even notice the bread as I was eating, which is about as good a compliment as bread can get on a sandwich.
-
For years I refused to eat another cheesesteak, if only because I knew it could not live up to that one. Then a few weeks ago someone bought one for me from Philly's Best, and I loved it. There is a Philly's Best by the Del Mar Gold Line station, and I have several friends who swear by it, including one friend who goes there several times a week.
-
So I figured I would give it a try. It was a nice day and the idea of eating outside at Del Mar station sounded pleasant. I ordered a cheesesteak with sweet peppers and American cheese. My friend got the same sandwich without peppers. I also ordered some "pizza fries" - fries with pizza sauce and Cheez Wiz.
-
My sandwich was fantastic. I added hot peppers to it to give it some bite. It was not as good as the one from Philadelphia, but it was damn close, and I certainly will not hesitate to go back to Philly's Best in the future. I will not, however, be ordering the pizza fries. I'm not really a big fan of cheese on fries to begin with, unless maybe it's parmesan with some garlic and parsley. And the pizza sauce added nothing to the experience. I'm glad I tried them, but they do not belong in the same meal with that sandwich.
Posted by JustinM at 2:49 PM

This post pushed me over the edge. I finally have tried Philly's Best today and convinced my lovely co-worker to partake as well.

This is why I love this blog… on a day where for some bizarre reason I’m feeling pretty melancholy, up pops a post that brings up only pleasant thoughts… I would marry Philly’s Best if it was a kind, generous, funny, athletic woman who insisted on making me steak w/onion and Cheez Whiz sandwiches on a daily basis… hell, even if just the sandwich part held true I would utter the vows…