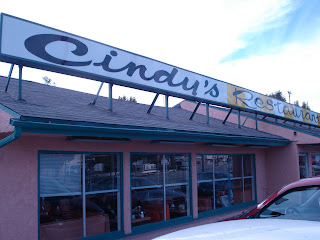 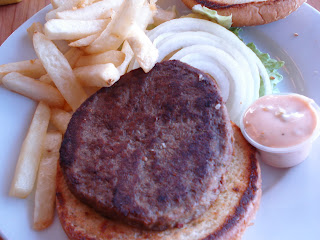 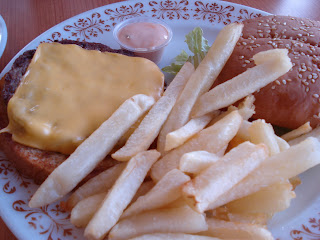 My friend Elizabeth loves diners. She spent the first 28 years of her life in New York and she views diners in the same dependable, comfortable way that I view King Taco or El Pollo Loco: nothing spectacular but inexpensive and reliable. A couple months ago Elizabeth and her friend, also from the East Coast, went to Cindy's restaurant in Eagle Rock. She really liked it and I promised I would go with her one day.

I had looked up Cindy's online to see if there was a menu somewhere. I even looked on Yelp. I am not a fan of Yelp at all. For every well-written review (and admittedly there are many,) there are at least twenty from people who had one bad meal at a place and are ready to proclaim it the worst restaurant of all time. And, in keeping with the growing fascism of our time, contrarian opinions are often ridiculed. (I'm not sure why people are so insecure that they cannot accept that someone might have a different opinion than they do. The world would be a boring place if we all agreed on everything. Well, except that Charlie Weiss is no football genius.) But the Yelp reviews were almost universally bad for Cindy's; too bad to ignore. I still was willing to try it, though.

This weekend, while running errands, we decided to stop there for lunch. The place definitely looks like a classic diner: orange booths, a long counter, photos and calendars decorating the walls. I ordered the turkey burger, Elizabeth ordered the cheeseburger, which she had the last time she was there.

The picture does not lie: my meal was not good. The burger had been in the freezer for quite a long time before it was cooked. The fries were limp and not warm. I took a bite of Elizabeth's cheeseburger. It was definitely better than my turkey burger, but it was not good by any means, and certainly not better than Tommy's or Oinkster just down the street.

Still, I ate the whole thing. It wasn't inedible. But I will never eat there again. The total for our burgers, fries, cole slaw and coffee was about 20 bucks, so it's not like the food is expensive. But just a few nights earlier we had eaten two Philly cheesesteaks with fries at Phlly's Best, and it was cheaper than this meal. And about 100 times better.

Hmm. I liked it. Then again, I'm East Coast and a diner fan -- for better or worse. So maybe don't take my word for it. or your friend there. :)

It seems that even though you dislike Yelp, it didn't lead you astray here... maybe there is some use to the website after all.

Indeed there is; it can be a valuable website. A couple of my friends write very good reviews on Yelp. I do not like the unmoderated format and crusader-like zeal of some people who have one bad experience at a restaurant and want to make sure everyone knows about it. You should read Yelp the same way you read Wikipideia: it's great to give you some basic ideas, but double check everything.