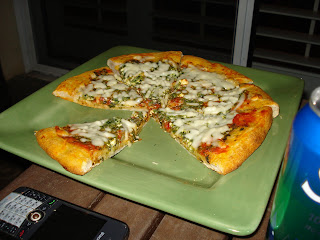 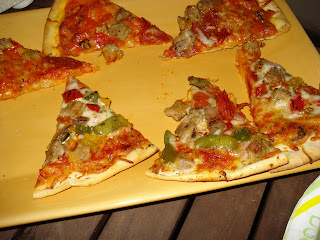 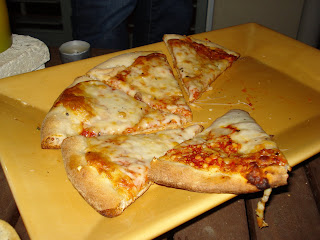 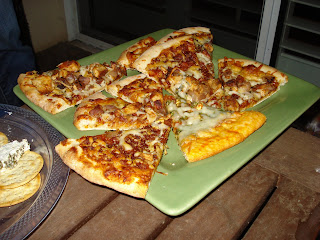 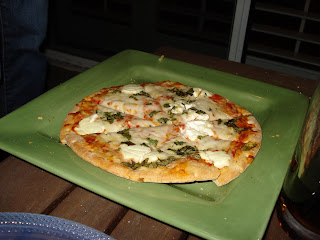 A couple of my close friends have an annual "Hot Buttered Rum Party" in early December. This year, a few of us were invited over the night before to do a test run of the hot buttered rum. We didn't want to make anything too fancy for dinner, so I suggested we cook a bunch of Trader Joe's frozen pizzas. Everyone seemed to like that idea.

I am a big fan of TJ's pizzas. They're cheap (literally half the price of frozen pizzas at Ralphs,) and tasty. Just the other day, in fact, while I was shopping there, a lady interviewed me on camera about what I liked at TJ's, and my first response was "the pizzas." (After we finished and I asked her what it was for, she replied "Unwrapped on the Food Network." So if you see a stunningly handsome guy in Trader Joe's being interviewed on FoodTV... I'm the guy after him.)

The first pizza pictured is the spinach pizza. Besides spinach there is feta cheese and tomatoes on it. This is good, although the crust is a little different than the others, almost a cornmeal crust, and it doesn't cook as well from frozen.

The next pizza is a sausage and pepper pizza. When it came out a couple years ago it was called "Trader Giotto's Pizza Palermo" until TJ's got sued. I do not remember if they changed the name. This is a really good pizza - quite possibly the best tasting sausage on a frozen pizza that I have ever had.

The third picture is the Margarita pizza. The Margarita (or "Margherita") pizza was invented by an Italian baker to commemorate Queen Margherita's visit to Naples in 1899. (This isn't necessarily important information; I just feel like I don't do enough to educate people on my blog.) This has always been one of my favorite items at TJ's. I often add parmesan cheese and fresh basil to it. I think it costs $4.99, and is better than many restaurant pizzas that cost three times that amount.

The fourth pizza is barbecue chicken. I remembered having this pizza before and it not being good. I must have been confused, though: this pizza was fantastic. I love barbecue chicken pizzas and I have had pretty much every frozen kind available. Most of them, like CPK, are lousy. I once cooked a Frontera Kitchens BBQ chicken pizza (I bought it at Whole Foods) that was the worst pizza I have ever tasted. This one was different. The barbecue sauce was tasty, and they chicken actually tasted like, you know, chicken.

The last pizza pictured is actually not a frozen one, but rather from the refrigerated section. It was topped with goat cheese, garlic and basil. Predictably, this was the group favorite. It's impossible to top the combination of garlic and basil, plus not having to cook it from frozen gave it a huge advantage.

This was a very fun night, and probably the least expensive group dinner I have ever been a part of (not counting the time I was 21 and my friends and I decided to eat ten bags of Pepperidge Farm goldfish for dinner.)