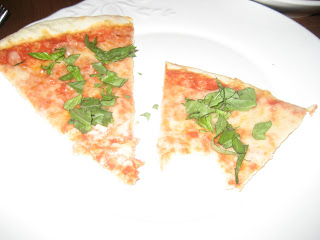 When my friend Tracie moved to an awesome apartment in South Pas, we immediately planned a wine and pizza dinner. Our plan was to pick up some stuff to make a salad and get a couple frozen pizzas from Trader Joe's, which we did. The only problem with the plan was that as soon as we cracked open a bottle of wine and started to pre-heat the oven... it wouldn't get any hotter than about 100 degrees.

So she suggested getting a pizza from Briganti. That sounded good to me; I had never been there but I had looked at their menu before and thought it looked like a nice place. We got a Margherita pizza. I've never had a pizza with mozzarella and basil that I thought was bad, and this was no exception. However, there was nothing special about it at all. If you had told me it was a CPK pizza, I would not have questioned you.

I suppose if any of my friends wanted to go there for dinner I would not argue. It might be a nice dinner venue (when driving by at night it looks very pretty inside,) and maybe pizza isn't their forte. But I do not see myself ever again ordering pizza from Briganti.
Posted by JustinM at 3:26 PM