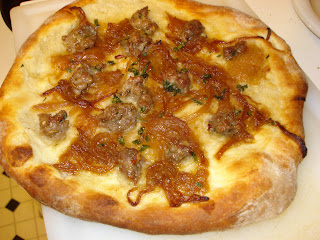 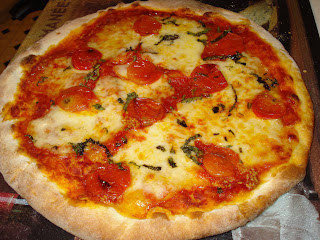 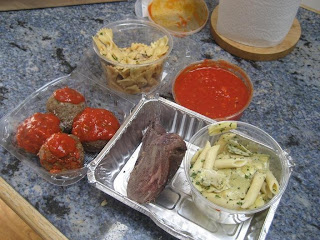 Porta Via in Pasadena is one of my favorite places around. When they opened last year I went there frequently for a cup of coffee. One day I was going over to my parents' house to watch a football game with my dad, and I stopped for coffee on the way. I decided to give some of their food items a try during the game. (This is the last picture, which I figured I might as well include.) I got penne with artichoke, bowtie pasta with sausage, beef meatballs with a homemade marinara, and a piece of red wine-marinated tri tip. Everything was great. The tri tip was the best I have ever had that was already prepared. Even my dad loved the food, and his tastes run exclusively towards meat. (Sometimes pepper is an exotic condiment to him.)

A couple months ago, I noticed for the first time that they had pre-made pizzas in their refrigerator. I opted to get the pizza in the first picture: sausage and caramelized onions. It was very good, although a little on the dry side (there was no sauce, only olive oil, and very little cheese.) I wished I'd had some fresh parmesan or perhaps even a little blue cheese in the fridge, but I did not. I decided that next time I would try the other pizza they had, a Margherita.

The next few times I visited Porta Via, however, there were no pizzas. Finally this past weekend they were back. The Margherita was also good, although it certainly could have used more basil. Between the two, I would say the sausage and caramelized onion was much better. One of these days I will buy it again and also get some cheese from PV to add to the pizza.
Posted by JustinM at 3:29 PM