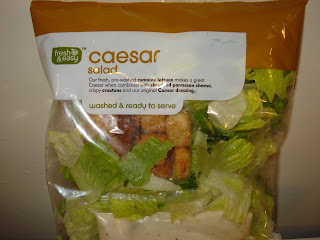 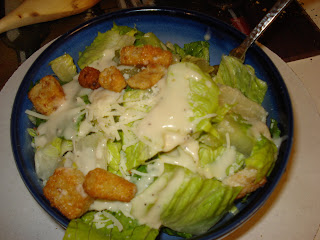 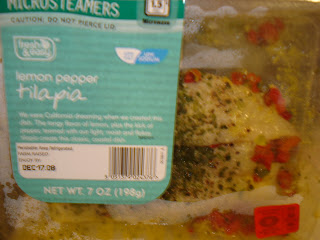 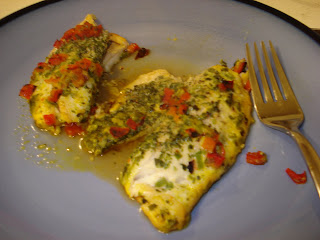 I first visited Fresh & Easy about a year ago when they opened in Arcadia. My friend Mick, who is English (Fresh & Easy is owned by Tesco, the "UK Wal Mart") had told me about the stores and they sounded interesting. But I wasn't terribly impressed on my first visit. I had read about it as being comparable to Trader Joe's, but, other than a few prepared foods (much fewer than I expected,) it did not have any unique items. It was more like a small Costco. So I decided I would just continue shopping at Trader Joe's. But the other day I got a coupon in the mail for $6 off any purchase of $30 or more. That seemed like a pretty good deal, so I figured I would give it another shot.

I was amazed at how many more prepared items they had than on my first visit. My friend and I bought food for almost an entire week, at a fraction of the price it would have cost at Bristol Farms or Whole Foods, and probably even cheaper than Trader Joe's.

We tried a bag of their Caesar salad. I generally like bagged salads, but not Caesar. The dressings all taste too much like ranch to me. This one was different: the dressing had a distinct peppery taste. It is the best Caesar I have had out of a bag.

We also bought a package of Lemon Pepper Tilapia. The instructions call for leaving it in the container and cooking it in the microwave, where it is supposed to steam. Anyone who has ever cooked fish in the microwave will understand when I say there is no way in hell we were going to do that. I cooked it on a piece of aluminum foil in the oven.

I was very impressed. Aside from being a little overcooked on the ends, the fish was delicious. The lemon pepper sauce tasted more like lime to me, but that's not a bad thing. I will definitely try more of their fish, and probably cook the next piece on the Foreman grill to see how that works.

As long as I keep getting those $6 coupons I will keep trying new things at Fresh & Easy.
Posted by JustinM at 2:20 PM