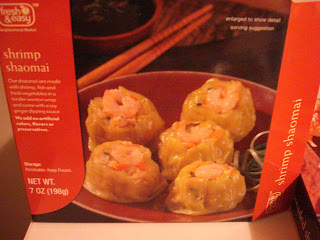 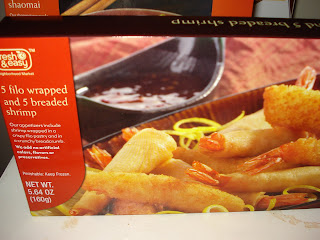 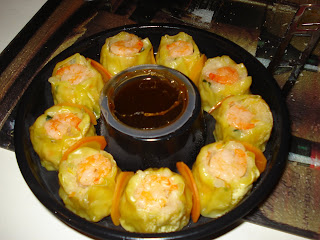 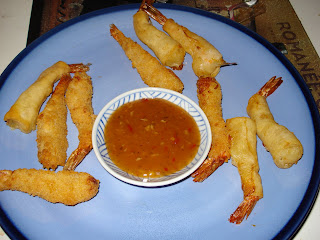 I ran into a buddy of mine the other night who said that after my "Fresh & Easy I" post the other day he was expecting more follow-ups. So I am going to oblige. A couple nights ago a friend and I had been out shopping all day. We were tired and went out for a couple drinks to unwind, and time got away from us. By the time we wanted dinner, most of the restaurants we were thinking about were either closed or closing shortly. So we just came home and cooked up some more Fresh & Easy items.

The shrimp shaomai was on sale in their "extra low prices section" - $2.79 for a box of 9. Shaomai have always been a favorite dumpling of mine, whether they contain shrimp, pork, or crab. These were shrimp and fish. I avoid using the microwave whenever possible, but I was in no mood to get out the steamer for these, so I just followed the instructions and microwaved them for a couple minutes.

They were much better than I expected. The soy-ginger sauce they were served with was very good, and the small pieces of carrot in-between the shaomai were tasty. Perhaps another time I will actually steam them and see how they turn out.

I also cooked a box of 10 shrimp in the oven. Five of them were wrapped in a filo dough and five were breaded. These were not as good as the shaomai. The breaded shrimp tasted ok, but there was not much shrimp in them, mostly breading. The filo shrimp were lousy. The wrapping did not crisp up at all; it just got rubbery. The shrimp did not tasted fully cooked, either.

I will probably try the shaomai again if they are on sale, but I won't bother with the breaded shrimp. Cooking shrimp in the oven never seems to work well, and these were no exception.