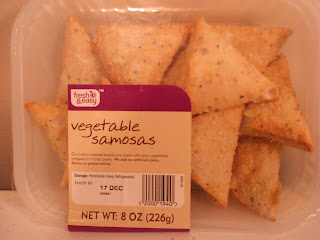 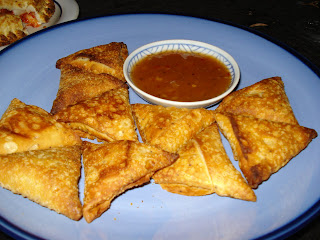 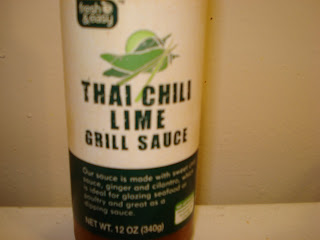 My friend Tracie called me the other night to see if I wanted to go out for a beer. I suggested she come by my place and have some wine instead. She was starving and asked if I wanted her to pick up anything from Burger King. I said I would put something in the oven. On my recent trip to Fresh & Easy I had purchased some vegetable samosas. I was not sure they were going to be any good, but I was reasonably sure they would be better than anything from BK.

I love samosas, but I was skeptical about these. When samosas are fried right in front of you, they are as good as anything you can eat anywhere in the world. However, sometimes when they are baked they are not cooked enough inside. And if they sit out more than a few minutes before you eat them, they usually turn into a doughy mess. (And if they have potato inside and it cools down, they taste downright nasty.)
These were great. They were unquestionably the best I have ever had cooked in an oven. I served them with some Thai chili lime sauce that I bought at Fresh & Easy.
Posted by JustinM at 2:09 PM

Sounds delicious. Now I know who to call the next time I get hungry.