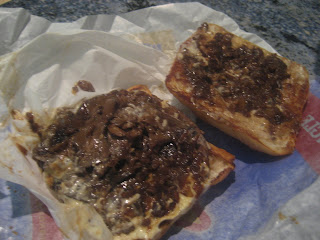 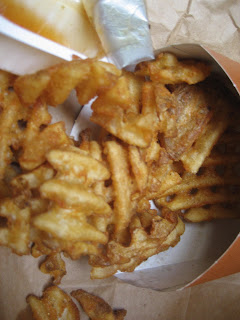 There are some fast food places (In-n-Out, Fatburger, Wendy's and Del Taco) that I could probably eat at every day. There are some (El Pollo Loco, McDonald's, and Popeyes) that I can eat maybe once a month. Then there are a few, like Burger King and Taco Bell, that I would just as soon never eat at again. At the very bottom of the list is Carl's Jr.

I have never had a Carl's Jr. burger that didn't taste freezer-burned. Their fries have always been undercooked, thin pieces of potato, until they started serving natural cut fries and waffle fries. Now their fries are slightly larger undercooked pieces of potato. Their fish & chips are predictably bad. And their kid's order of chicken nuggets, which come in the shape of a star, are downright creepy.

But they did put out a new promotion for the Prime Rib Six Dollar Burger, so I figured I would give it a try. My friend and I had been in Old Pasadena and we decided to go out for a nice dinner. We went into a popular restaurant and were told that the wait would be 15 minutes. We got a couple glasses of wine at the bar and waited about twenty minutes before being seated. We then sat at the table for twenty-five minutes without a single person acknowledging us. We were not given menus, plates, silverware... nothing. Two people were seated right next to us and immediately given menus and had their drink orders taken. So we got up and left. And we ended up going by Carl's Jr. on the way home.

You've probably guessed by now that the burger was bad. You are correct. The patty was old and tasteless, just as it always is. The prime rib was full of fat and the bread was stale. The horseradish sauce on the burger was actually very good. It was spicy and there was plenty of it. But that is the only good thing that can be said for this burger (other than the fact that Carl's advertised this burger with the slogan "meat-as-a-condiment," which is equal parts horrifying and hilarious.)

Ah, RWB. Hasn't been the same since the server from heaven stopped working there.

Funny how I didn't mention the restaurant but you knew exactly what I was referring to.

Well, how many times have we all had that experience there?