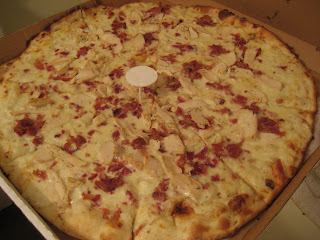 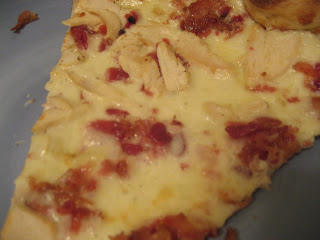 Having already detailed how much I like Mamma's Brick Oven, I wanted to give them a separate review for their chicken bacon pizza. My buddy Phil, who also likes Mamma's, has been telling me for months about a pizza they make with chicken, bacon, and ranch sauce. This did not sound particularly good to me. I love bacon, but I have never had bacon on a pizza that I thought was any good. Usually it's mostly fatty pieces of bacon, or the dreaded "bacon topping." (Once when I was 21 I visited a friend of mine at USC and we ordered a pepperoni and bacon pizza at one in the morning. Even in our inebriated state, we refused to eat the vile, charcoal-looking topping they claimed was bacon.)

And I definitely don't like the creamy, ultra-boring flavor of ranch. But my buddy said he would pay for the pizza if I didn't like it, so I figured one day I would give it a try. Last night my friend Tracie and I were deciding what to do for dinner and she suggested a pizza at The Kitchen in Old Town. I countered with trying the chicken bacon pizza at my place, having some wine and watching Top Gear. So that's what we did.

The pizza was definitely good. It was, without question, the best bacon I have ever tasted on a pizza. The chicken was good, too. My only complaint was the ranch sauce. The pizza just tasted much too dry. It wasn't bad, but it just is nowhere near as good as their Margherita pizza. I will not be asking Phil to reimburse me, though.

By the way, for breakfast this morning I warmed up two leftover pieces in the oven. On one of them I added some chipotle pizza sauce that I had made a few days ago, and the other I smeared with Zankou Chicken garlic sauce. They were both phenomenal, much more flavorful and less dry. 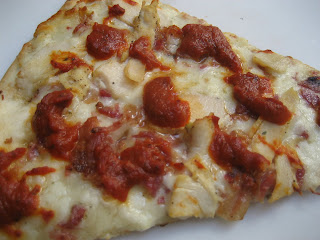 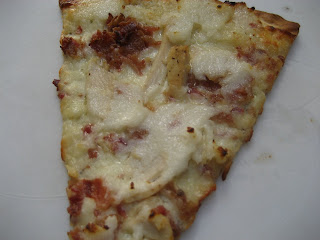 I don't think I've ever had bacon on a pizza before, with the exception of Canadian Bacon, but that's really ham, so I don't think it counts as bacon. Anyway, I agree that Mama's chicken/bacon pizza is good - for what it is. But nothing can touch their Margherita.

I do think that a comparison of The Kitchen's garlic/basil pizza (heaven!)with that of Mama's is something you should consider.

Well, I would certainly be willing to try a side by side comparison. I am always up for pizza. The Kitchen's garlic and generous amounts of basil may be better toppings, but I think Mamma's crust is better, and there is absolutely no question that Mamma's "zest margherita sauce" is better. That is simply the best pizza sauce I have ever tasted.

God bless you for giving the CR pizza a whirl... True, the Margy is an outstanding pie and quite possibly should be in its own class when it comes to comparisons... I've never had the dry problem with my 'za, but maybe its because I'm always crying inside and somehow that transfers to the pollo/tocino concoction.
Beer on me for following my suggestion... BTW, my boy prefers the Marg over the Chicky too. I'm beginning to think I'm the lone wolf of food appreciation... adieu