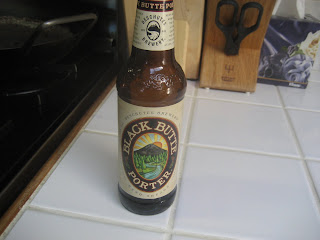 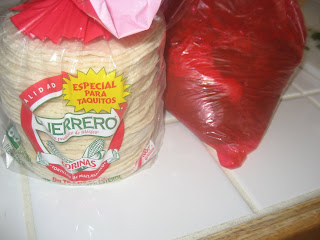 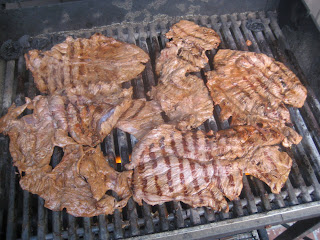 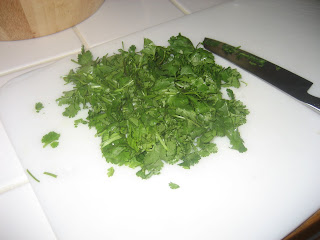 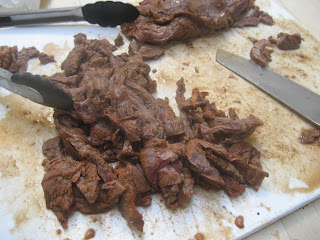 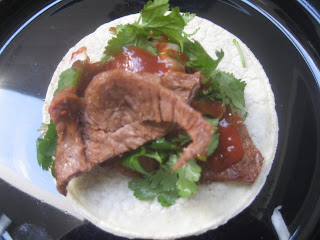 Saturday was both my dad's birthday and the UCLA-USC game. In other words, I had one reason to celebrate. First things first, we fortified ourselves with Deschutes Black Butte Porter. It was great when UCLA scored the first touchdown. (For a transitory enchanted moment we held our breath in the presence of that first touchdown, forgetting that USC gave them an 11-yard field and they still almost didn't score. It would be their only points of the game.)

My favorite place for buying carne asada is the King Ranch Market in Monrovia. Perhaps I went a little overboard buying four and a half pounds for four people... but then again, leftover carne asada is never a problem. I also got a bag of Guerrero 4.5" tortillas - my favorite kind for making tacos.

While the carne was cooking on the grill (which only takes about five minutes) I chopped up a lot of cilantro and some sweet onion. When the meat was done I chopped it up and assembled tacos with the ingredients, plus a roasted red salsa from the market. They were awesome. The game was not.

PS - My comment about leftover carne not being a problem? A couple days later I was at my parents' house and there was still some left, so I made some nachos with jalapeno jack and cheddar cheese, grilled corn, and Taco Lita hot sauce. They were even better than the tacos. 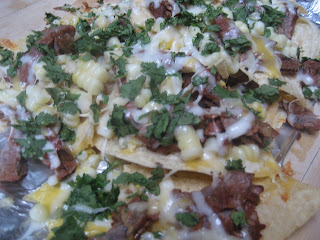