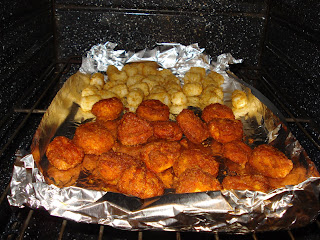 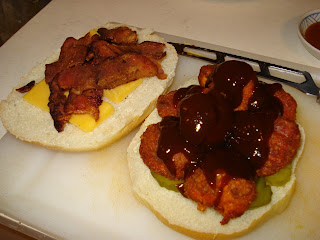 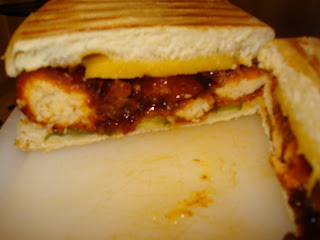 With yesterday's early evening doubleheader of USC vs. Oklahoma and UCLA vs. Texas, I wanted to make something easy so I could keep my eye on the games. I had some popcorn chicken and tater tots in the freezer, and some leftover panini bread from the previous night's meatball sandwiches, so I got an idea. I cooked the frozen stuff in the oven, then cooked a few slices of bacon in a pan.

I put the chicken on the bread with the bacon, some Tillamook cheddar, pickles, and Guinness Bulls Eye. The cheese didn't melt as much as I hoped but it was still fantastic.

Both USC and UCLA almost pulled the upsets, although the UCLA game wasn't as close at the final score indicated. Texas did not have much trouble with UCLA's "offense," which again this year consists of holding the ball for 30 seconds and then taking a low-percentage or desperate shot.
Posted by JustinM at 4:23 PM

:) Clearly you're more of a college BBall fan than a college football fan. When I saw the words "USC vs. Oklahoma", my first thought was that I might need some sort of intermittent wiper to clear the drool from the floor of my apartment.

No, I was referring to the sport where USC's star athlete got $30,000 from an agent, not the sport where its star got a $300,000 house for his parents. (But in both cases the NCAA looked the other way, so it's easy to get confused)