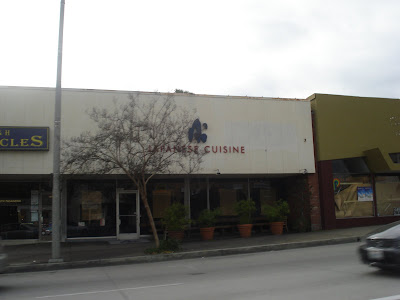 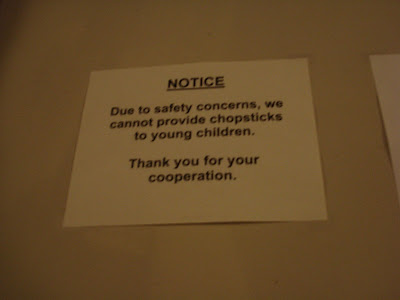 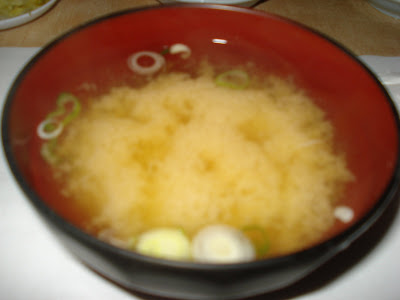 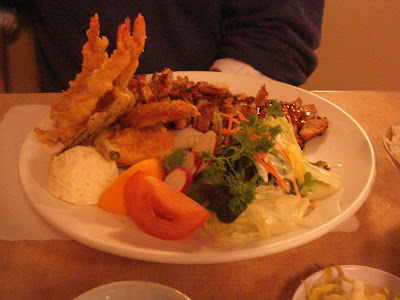 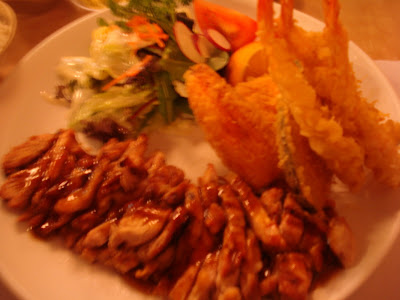 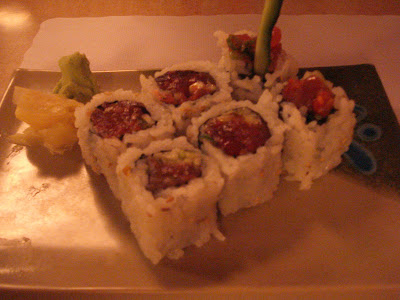 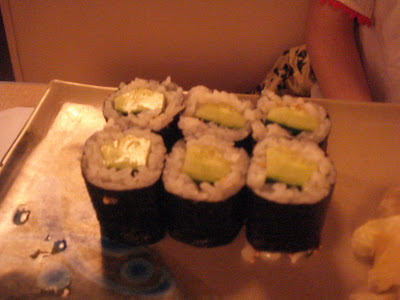 My friends Jon and Joe, independent of each other, have both told me in the past how much they like Ai. Elizabeth and I both really like Japanese food, so we decided to give it a try one night. I had read reviews of Ai, and almost all of them praise the food. However, a large percentage, almost a majority, denigrate the service. I have also read many suggestions that the poor service is prejudiced against white people. Since we are both most definitely white people, I was curious to see.

They were filming something on Fair Oaks, probably at the Rialto, so we had to park a block away and walk through the people to get inside. There were a few people aroud the sushi bar, but only one other table occupied. We ordered some iced teas and our meals. It was dark inside and I did not feel like using the flash on my camera; with only a handful of other people I did not want to disturb them. So the quality of the pictures isn't best.

The miso soup we both started with was very good. Not as good as Tani, not even close, but still better than average. I ordered a combination of terriyaki chicken and tempura. Elizabeth ordered a cucumber roll and a spicy tuna roll.

The service was indeed poor. I drank my iced tea quickly and then had to wait about ten minutes to get it refilled. Our waitress was cleaning the empty tables and did not seem interested in looking over at me. After 20 more minutes my chicken and tempura came out. But not Elizabeth's rolls. I waited several minutes with the food getting colder in front of me, wondering why it was so hard to get her food out. She certainly encouraged me to start, but I wanted to see how long it would take. If it had taken much longer than it did (at least five minutes) I might have said something. (I once was at a Salvadoran restaurant with a friend of mine who is of Salvadoran heritage, and he told the server to remake his whole meal because my food came out one minute after his.)

My salad was very good, my tempura good, and my terriyaki chicken poor. It was very fatty and the terriyaki sauce was as salty as any I have ever had. I had a couple pieces of both of Elizabeth's rolls. The cucumber was good, which is quite a compliment since I am not crazy about cucumber. The spicy tuna roll was fantastic, as good as I have ever had. They were big pieces of fresh tuna with a nice amount of spice.

I liked Ai, but I did't love it. If I go back I am definitely going to get sushi and nothing else. And I will sit at the sushi bar. The service was very bad, but I'm not going to say it had anything to do with our race, because I have no idea. They may just be incompetent servers. The prices were reasonable. Tani is certainly more expensive, but the service and quality is much better.

I've only eaten there once and sat at the sushi bar. We talked to the chef a bit and he warmed up to us, and was very attentive. The sushi was great, but I cannot say it was any better than Tani. I'm certainly not as much of a sushi afficianado as Joe though.