River Grill at the Alisal (Rachel Getting Married, Part 2) 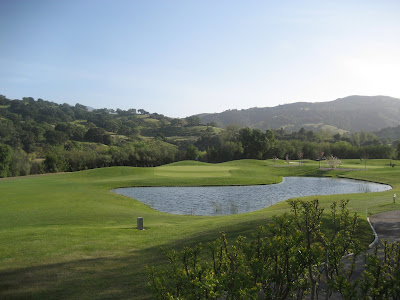 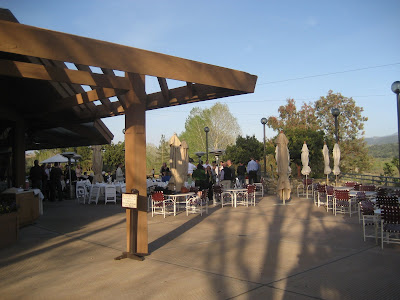 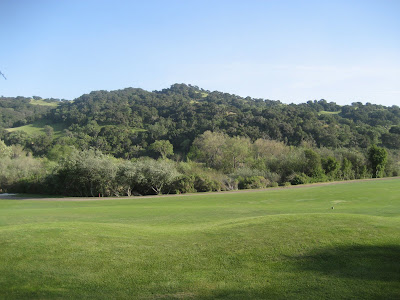 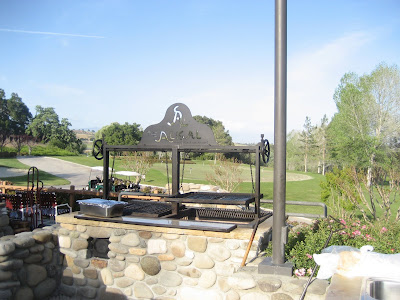 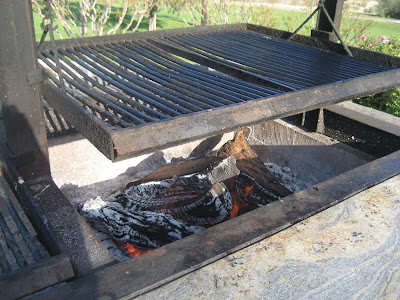 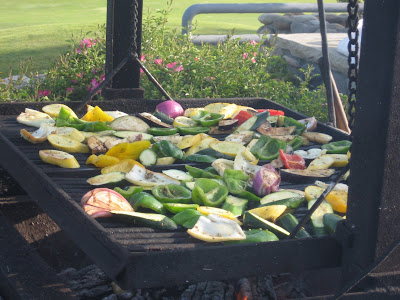 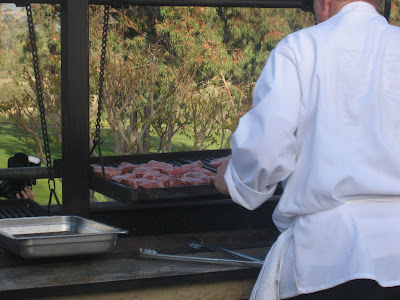 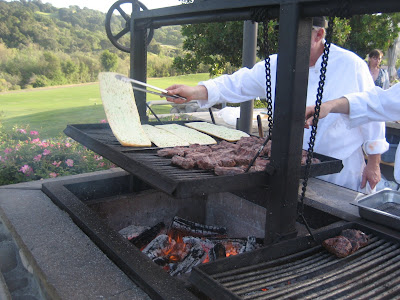 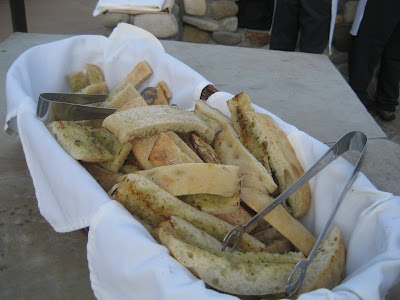 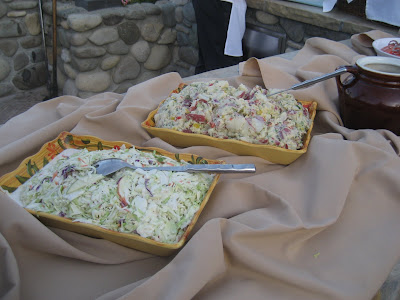 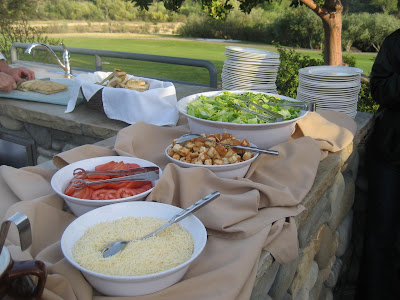 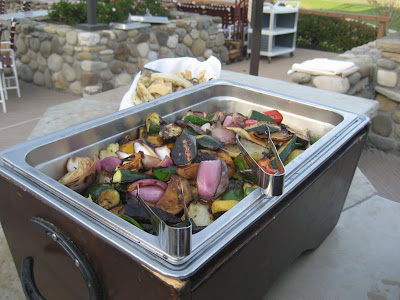 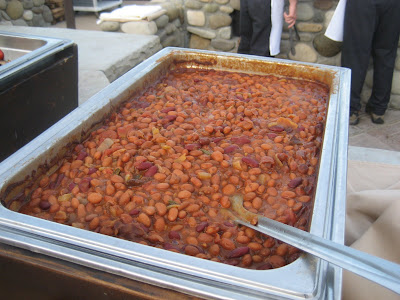 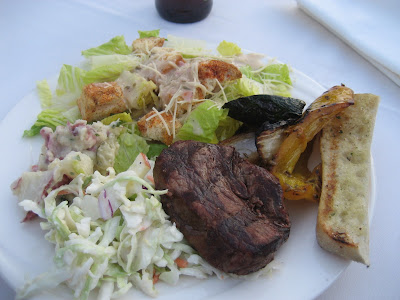 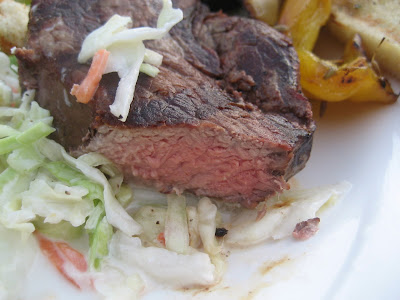 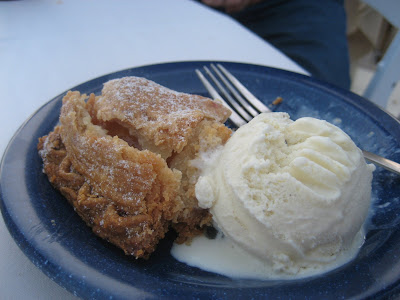 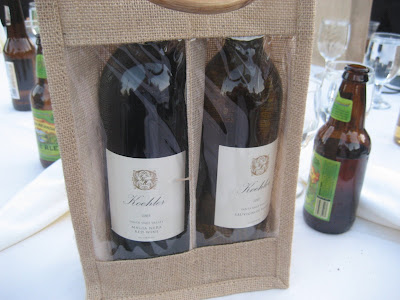 I have rarely had good food at a golf course, and I have rarely had good food at a wedding rehearsal dinner. Rachel and Jim's rehearsal dinner was a spectacular exception to both. The River Course at the Alisal is a gorgeous golf course in Solvang. I had never been there; I had never even heard of it. The River Grill, at the entrance to the course, has a patio that wraps around the side of the building and provides amazing views of the mountains. I have been to this region of California at least 50 times, so it is rare that I still encounter something that blows me away. This did.

From the moment I saw the Santa Maria-style grill on the patio I knew we were in for a treat. Santa Maria-style barbecue - red meat, usually but not necessarily tri tip, cooked on a grill over red oak and almost always served with salad, beans and garlic bread - is amazing when done correctly. (There are restaurants in Southern California who claim to specialize in this style, some even invoking Santa Maria's name. I do not like any of them.) I asked the man working the grill what wood he was using. He admitted that there was some red oak but "we have a lot of white oak left over that we have to use." (I didn't think this would matter, and it did not.)
After grilling a large amount of veggies (including red onion, my favorite grilled vegetable,) the cook started on the steaks: gorgeous pieces of top sirloin, each the size of a softball. My friends were scattered throughout the patio, drinking, talking and taking pictures, but I stayed pretty close to the grill, inhaling the smoke every once in a while and watching the two cooks raise and lower the grill. Perhaps if I could have observed Michelangelo painting the Sistine Chapel I would have watched with more reverence than I watched these men. But perhaps not.
Eventually the buffet was laid out: the beef, salad, grilled garlic bread, beans, cole slaw, grilled veggies, and potato salad. I took some of everything except the beans. At the end of the line one of the cooks was asking people what piece of meat they wanted. I requested medium-rare.
I'm not sure how else to say this: it was simply one of the greatest meals of my life. I wasn't a big fan of the bread, I thought it was plain. But every other thing was just about perfect. The meat was cooked exactly as I requested. The veggies were caramelized but not burned. The slaw was awesome. I have never been a big fan of potato salad, and I was amazed by this. I wondered to myself if perhaps this is how potato salad usually tastes and I had been missing out for years. (It turns out, no. My buddy, who had come over from England for the wedding, told me he loves potato salad and this was some of the best he has had.) After dinner I thanked the cook and told him it was, by far, the best food I have ever had at a wedding. He appreciated it and humbly said that they are given nothing but the best ingredients to work with, including U.S.D.A. Prime top sirloin. (He said most caterers do not use Prime meat. I had never thought of this, but it doesn't surprise me.)
Would I have loved this meal so much if it wasn't in such a beautiful setting, for my friends' wedding, in one of my favorite parts of America, with an open bar? I don't know. But that's a meaningless question. It was what it was and I loved it.
For dessert there was ice cream and several kinds of pie. This meal is exhibit number one in why I don't eat much dessert: when dinner is this good, I eat as much as I can and don't leave room for much else. Elizabeth had a scoop of ice cream and some peach pie. She said it was good but not great, making me even more glad that I didn't have any.
After dinner I got my groomsman gift: two bottles of wine. Elizabeth, also part of the wedding party, got two bottles as well. We thought these were very nice gifts. (We like wine. A lot.) Then we found out the extent of our gifts: we actually have two memberships to the Koehler wine club. Which is nice.
Posted by JustinM at 11:38 AM