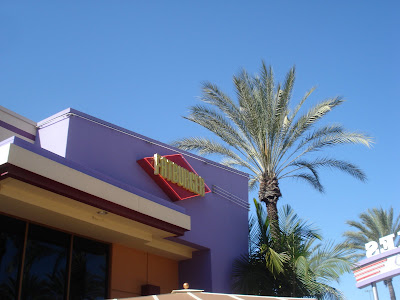 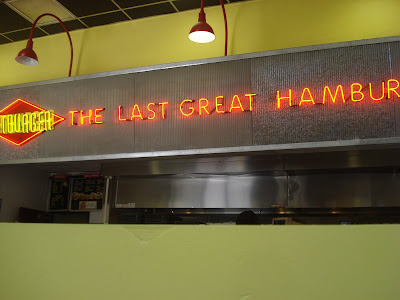 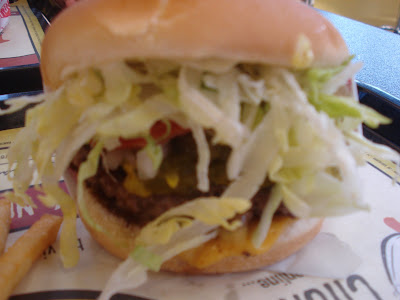 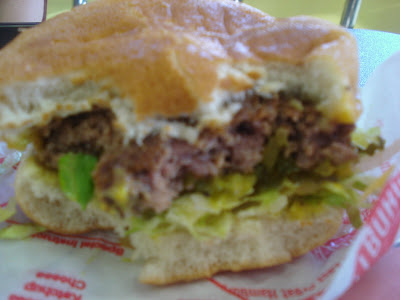 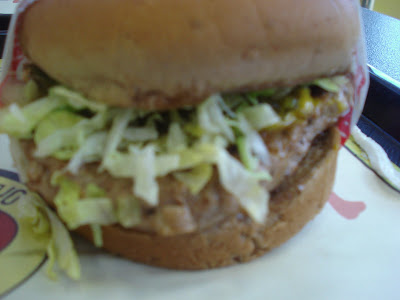 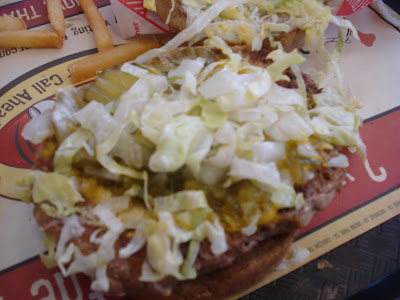 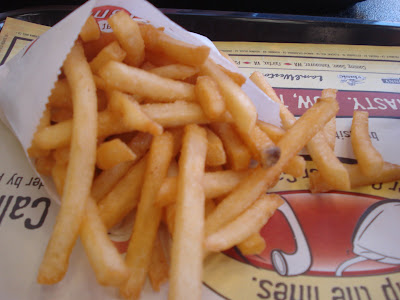 There are many restaurants I miss on the west side of Pasadena. The tableside Caesar salad at Delacey's Club 41 was my favorite dish in Old Town. (Although the version they were making there the last few years they were open was a pale imitation of what it once was.) The spicy fries and pitcher of Budweiser for under 10 bucks at The Rack Shack was always a great standby. The "french fry pizza" at Breadcrumbs was a thing of beauty; that restaurant lasted about a year if I remember correctly. There were many mornings I loved at Soda Jerks, getting ready for a hike up Angeles Crest Highway, and many evenings I loved at the John Bull, watching Lakers games and playing darts.
-
But there may not be anything I miss as much as the Fatburger that used to be on Arroyo Parkway. I have loved Fatburger since the first time I tried it, during a massive windstorm when I was a teenager and my friends and I had just spent a long time trying to tie a Christmas tree to a fence. (Don't ask.) We were hungry and they suggested Fatburger. I said I had never been and they both gave me a blank stare.
-
I loved it and I started going to Fatburger as frequently as any place in Pasadena. It was faster than going to In-n-Out and much better than Lucky Boy across the street. Then it closed. I was crushed. Well, no, not really. But I wished it hadn't closed. One opened in Monrovia but lasted less than a couple years. Now there are no locations close by. Every once in a while I go to the Universal City Fatburger (and deal with the worst parking lot in Los Angeles County,) but that trek seems to occur less and less as the years go by.
-
Over the weekend Elizabeth and I felt like burgers, and she wanted TCBY frozen yogurt, so after checking on the internet I suggested we go to West Covina and accomplish both. It turns out the TCBY is attached to a Mrs. Field's in the Westfield shopping center, and they only had a few flavors, none of which looked good. But Fatburger was welcoming, as always, with its familiar color scheme and neon sign reading "The Last Great Hamburger Stand."
-
Elizabeth had a Fatburger with cheese, I had a turkey burger, and we split an order of skinny fries. Unlike Wolfe Burgers, where I always get a turkey burger, I only order a turkey burger about half the time at Fatburger. They make a fantastic one, and I was in the mood for turkey that day. Elizabeth really liked the burger, and she loved the skinny fries, as do I. They also make fat fries, which are great as well.
-
I don't understand why there isn't a Fatburger in Pasadena. I have yet to meet someone who doesn't like it. A lot of people argue passionately about Fatburger vs. In-n-Out. I don't see the point of that debate; I love them both and don't think you need to choose one over the other. (It's not like we're talking about the Dodgers vs. Giants.) If I were only allowed to eat at one for the rest of my life, I would probably choose Fatburger. Their beef is better and their fries are much, much better than In-n-Out's. (That being said, the total sum of the parts of a Double-Double is slightly better than a Fatburger, which is why I'm glad I don't have to choose.)
Posted by JustinM at 11:11 AM