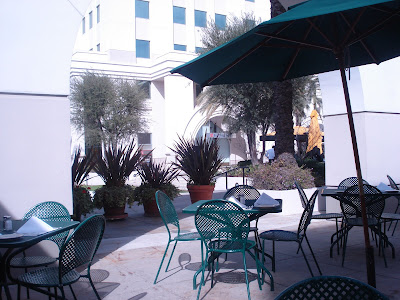 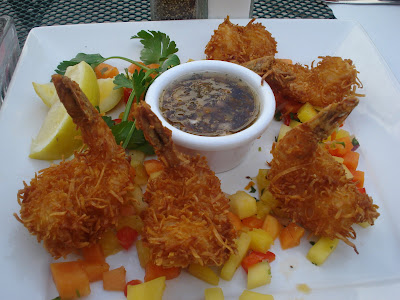 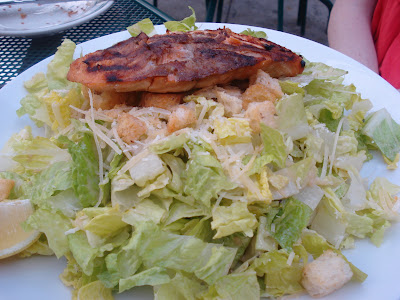 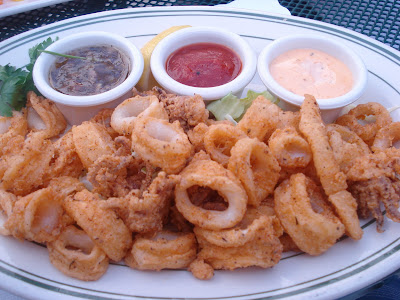 After a hot morning of moving all kinds of heavy stuff, including donating a fridge to the Salvation Army, I was in the mood for a big lunch. And I was pretty disheveled (and I imagine not smelling like roses) so I wanted to eat outside as well. I considered In-n-Out but thought I deserved something a little nicer (although nicer, of course, does not necessarily mean better.)

On the weekends it's fun to introduce Elizabeth to places she has not been. And one of my favorite places around the west side of Pasadena is the Plaza Las Fuentes, just east of City Hall. The restaurants in the plaza - McCormick & Schmick's and California Pizza Kitchen - are not favorites of mine by any means, but it is always enjoyable on a nice day to sit outside and look at the fountains or buildings.

When I was in my early 20s, I frequently met friends at McCormick & Schmick's patio for their happy hour. It was, and still is, one of the best deals in town. For $1.95 (with the purchase of a beer,) you could get a burger and fries or a couple fish tacos. I have read that the prices have gone up slightly, but they are still cheap, by any measure.

I tried to remember if I had ever been there when it wasn't happy hour. Eventually I did remember a Saturday lunch about 5 years ago when a friend and I split four appetizers for our meal, including an order of popcorn shrimp that were some of the best I have ever had. I immediately became obsessed with eating those again (I sometimes get food obsessions when I am very hungry) and suggested we go there.

Unfortunately, they did not have any popcorn shrimp on the menu. When I asked the waiter if they had any, he gave me a strange look, as if I had asked for Ethiopian food. I asked if there was fried shrimp of any kind on the lunch menu; he said "just the coconut shrimp." As it happened, Elizabeth wanted to start with an order of those. She ordered a Caesar salad with blackened salmon as her entree, and I ordered the calamari, figuring they were fried and served with multiple dipping sauces and that was the closest I could get to the popcorn shrimp I was craving.
As much as I love shrimp, I have never been a fan of coconut shrimp. I just don't think the flavor of coconut adds anything. As a result, there are two categories of coconut shrimp to me: "disgusting" and "not completely bad." These shrimp were slightly closer to the latter.

Elizabeth's salad was great. It was massive and she only ate about half of it, and for the next 24 hours we both picked at it in the refrigerator. My calamari was good. Popcorn shrimp would have been much better, and the calamari did not come close to being as good as the calamari I ate several times in Portland last summer, but I ate almost all of them.

And it was a very enjoyable way to spend lunch. A couple friends strolled by and sat down with us for a bit, and we lingered long after the food was gone, sipping iced tea. I had forgotten how enjoyable that patio is. I would certainly like to go back this summer, although next time I am going to make sure they have popcorn shrimp.
Posted by JustinM at 11:39 AM