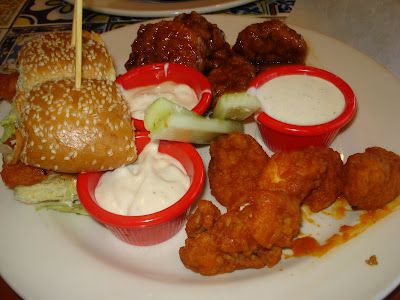 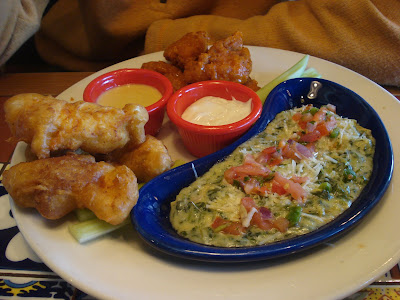 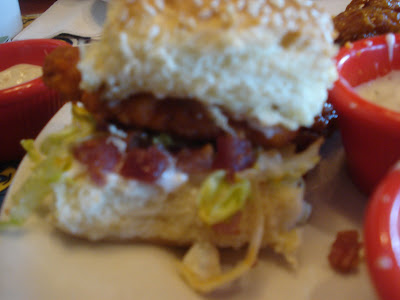 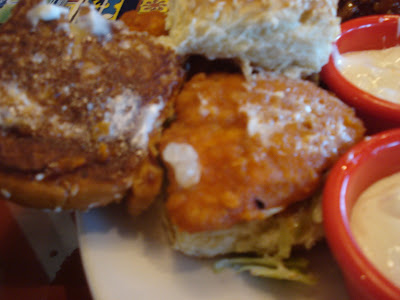 My brother and I were out the other day, trying to decide where to go, when I remembered a recent article I had read somewhere about Chili's new "sweet chile glazed" boneless wings being one of the unhealthiest foods in America. I remembered the article, not because of its point (who cares?) but because sweet chile sounded like a nice flavor and I wanted to try them.

I've always "kind of" liked Chili's. I don't eat there more than once a year or so, and I don't think most of their food is very good, but I've always liked their boneless wings. They are definitely unhealthy, but they taste really good. My friend Min and I once at a Chili's in Rapid City, South Dakota, after a very long day of driving. We'd started the day in Denver and on our way we spent hours looking at both Mt. Rushmore and Carhenge (I couldn't decide which made me love my country more) and by the time dinner came around I was famished. I ordered three orders of boneless wings in different flavors. I couldn't finish them all, but I'm sure what I did eat was around 2500 calories or so.

My boneless buffalo wings were just average. I've had better at many, many places. But the chicken sliders were much better than I expected. They had bacon on them which was completely unnecessary but still appreciated. And the sweet chile glazed boneless wings were fantastic, maybe even the best thing I have ever had at Chili's.

I tried a bite of my brother's spinach and artichoke dip. It was good but I didn't love it, although I have never been a huge fan of artichoke. He ate the whole thing, though, and was hungry for more.

Hopefully the sweet chile wings will be around for a while, because I would definitely like to have a large order of them sometimes soon.
Posted by JustinM at 1:31 PM

I have decided I no longer like spinach artichoke dip after ordering it at the Bonaventure Grill in downtown L.A.. The soupy creamy mess that came out was enough to ruin the dish for all time!

I have not eaten at the Bonaventure since "It's a Living" went off the air. That show was too beautiful to last.