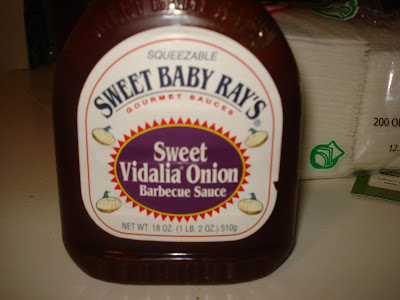 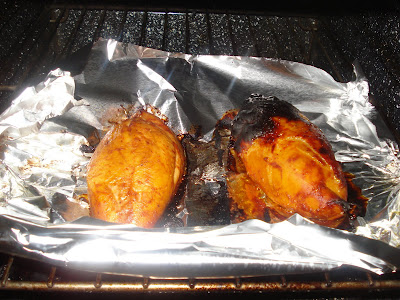 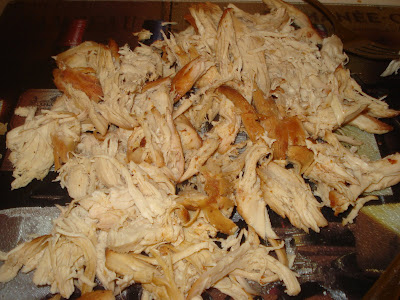 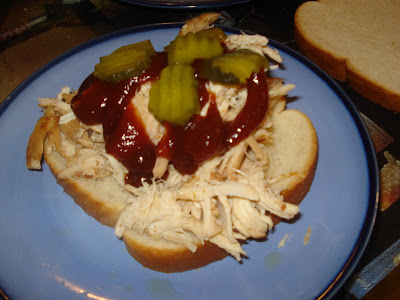 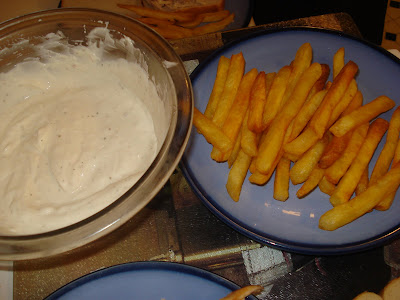 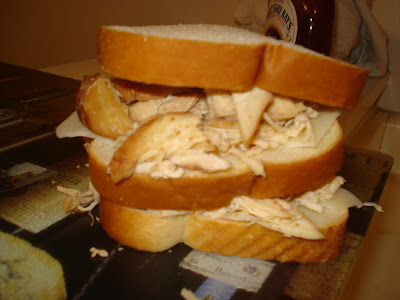 Now that ESPN Sunday Night Baseball is back in my life, there is nothing I love more on Sunday evenings than cooking something good for dinner, watching the ball game, then watching The Simpsons and The Unit. (Now that The Shield has ended and 24 has decided to have everyone except Jack Bauer doing stuff, The Unit is my favorite show on TV.)

Recently I felt like making some barbecue chicken sandwiches. Last month at a St. Patrick's Day party at my friend Zach's parents' house, I had some meatballs that had been cooked in a slow-cooker with Sweet Baby Ray's barbecue sauce. They were some of the best meatballs I have ever had. At Albertson's, all the varieties of Sweet Baby Ray's sauce were on sale for $1 each, including one flavor claiming to have Vidalia onion in it. Vidalia onions are one of my favorite foods, so I decided to get a couple mesquite chicken breasts from Taylor's, cook them in the oven, and mix them up with the sauce.

Of course, when I roasted the chicken breasts, the smell was heavenly. I took out the chicken and pulled it apart with a couple of forks. It was juicy and tender and there was no way I could drown it in a bottled sauce. I took a generous amount and piled it on some white bread, added a few pickles and a couple squeezes of sauce. The sandwiches were great.

I cooked some Fresh & Easy fries in the oven. A couple months ago I came across a recipe for some garlic mayo that seemed too easy to be true: you soak a crushed clove of garlic in some vinegar for about five minutes then mix it with mayonnaise. I have done this several times and it is a very tasty sauce. (I've altered this slightly by adding a generous amount of cracked black pepper and a couple drops of lemon juice to the recipe.)

There was plenty of chicken left over. I asked Elizabeth if she wanted me to make a sandwich for her to take to work the next day. She said yes, so I took all the chicken and piled it into a double-decker sandwich, a behemoth about half a foot high. I almost wanted to eat it myself, but decided not to.

Do you leave the garlic in the vinegar and put all of that in the mayo?

Yes. I just looked to see if I could find the recipe, but I could not. I read it a couple months ago in Sunset, Bon Appetit, or Cooking Light. But I don't remember which. Sorry. I'm not very helpful.