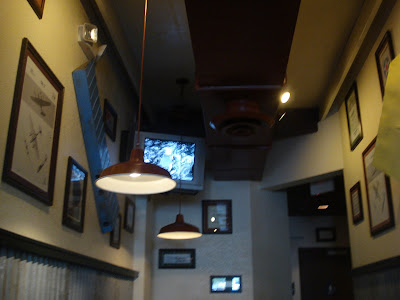 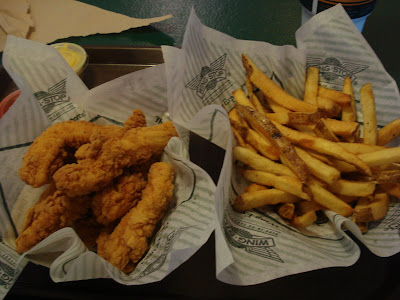 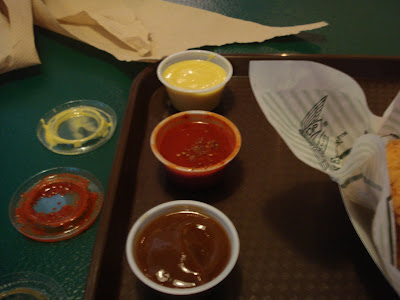 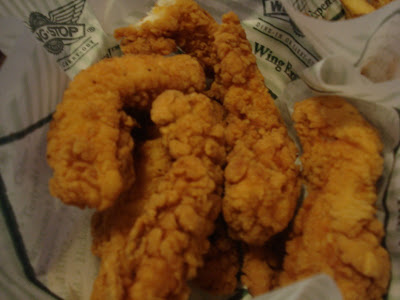 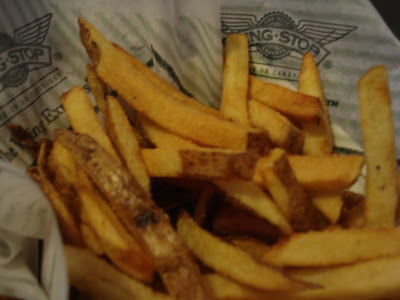 I went to Wingstop about three years ago, shortly after I first heard of them. I remember liking the fries, but I do not remember a single other thing about the place. Last week I was watching baseball with a friend and one of the ubiquitous-during-sporting-events Wingstop commercials with Troy Aikman came on and he asked me if I had eaten there. I said I had but that I had no recollection of the taste. So I decided to go again.
-
The location I went to, in Monrovia, was tiny. The walls are covered with aviation-themed photographs and a couple TVs were tuned to an ESPN special about the NFL Draft. (I admit the NFL is 5th on my list of favorite sports - after baseball, college football, NBA basketball, and college basketball - but I really do not care one bit about the draft. I don't understand the hundreds of hours of footage ESPN produces on it, when maybe only 3 or 4 players will have any impact whatsoever for the next couple years.)
-
Wingstop has wing/french fry/drink combos that are a better value than ordering separately, but I wanted to try the 7 piece boneless strips, which are not available in a combo. I selected "Cajun" and "Hawaiin" as my dipping sauces and ordered a side of honey mustard. There are several other flavors (lemon-pepper, garlic parmesan, atomic, etc.) but none that really looked good.
-
The boneless strips were very good: crispy on the outside and juicy inside. Wingstop's fries are great. They are cut fresh from Idaho potatoes, fried to order and seasoned. These are what In-n-Out's fries could be.
-
The sauces, unfortunately, were lousy. The Cajun sauce was buffalo sauce with a pinch of seasonings on top. The seasonings added nothing to it and it tasted exactly like buffalo sauce. The Hawaiian sauce had very little flavor. I was expecting something sweet, maybe pineapple or some other fruit, with perhaps a little spice. There was just no flavor at all. The honey mustard was good but I had to pay 69 cents extra for it. (That's not a huge amount of money, but when you're paying 3 bucks for an order of fries it doesn't seem unreasonable to expect a small container of honey mustard for free.)
-
I doubt I will ever return to Wingstop. If I do it will just be to get some fries. The whole meal (I also had a large ice tea in addition to what you see here) was $13.50. That's not an outrageous amount, but it's too expensive for what is basically fast food. (Just a few nights ago I picked up two footlong sandwiches and two bags of chips at Subway for dinner, and together they cost less than that.) If Wingstop's sauces had been good I would go back and try more, but they were not good at all. I have not been this let down by Troy Aikman since the 1988 USC game.
Posted by JustinM at 1:09 PM

Should have tried the parmesan wings. They are really good. Every time we have a get together at a friends house, someone brings and order of those and an order of the regular hot wings. They are great to go back and forth between.

I've never been here, but often wondered about this chain, especially since it always comes up when you do a google maps search for "bbq'. I have a feeling this place has little to do with bbq. The fries look pretty tasty though, but it's no "Dive"!

No, it's not Dive!, not by any stretch. Of course, at Wingstop you can just relax and watch ESPN without every hour the whole restaurant turning into a submerging submarine.

It was a bad experience for you because you picked bad flavors! Original hot, garlic parmesean, and lemon pepper are the way to go

I went back a few months later. Original hot was fine but nothing special; garlic parmesan was good, the best of their sauces that I have now tried.