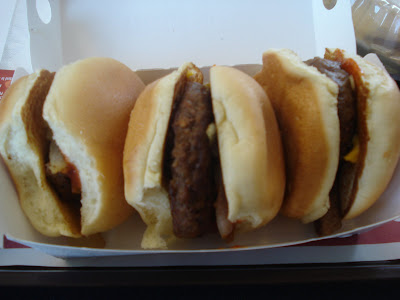 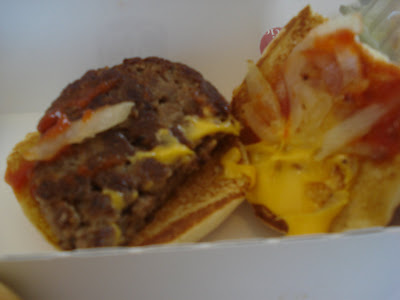 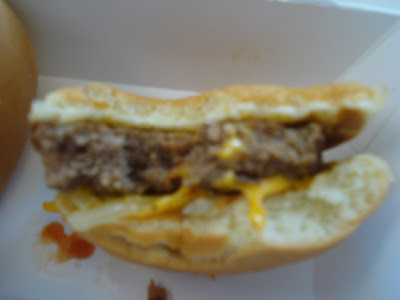 Where the heck did this craze for sliders come from? For most of my life, the only sliders I was aware of were the White Castle burgers. Burger King came out with Burger Buddies when I was a kid, but they weren't around for very long. But recently it seems like everyone is trying to get in on the game.
-
Over the last decade of my life, the only sliders I ever ate, other than a couple times I made them myself, were on Sunday afternoons at Jake's in Old Pasadena, watching NFL football downstairs with some friends. A few years ago, my friend Kevin and I were in New Orleans and the hotel bartender told us late at night that there was a White Castle just a couple blocks away. We were hungry and went out to find it, but couldn't. Because she meant to say Krystal Burger. There are no White Castles in Louisiana. So we wandered around for a little while looking for White Castle, then decided just to buy some beer and go down to the river to drink it.
-
A couple months ago Burger King came out with their Burger Shots, which I did not like. Johnny Rockets just came out with some mini burgers, and now Jack in the Box has them. There is a coupon on the Jack in the Box website for $1 off the mini burgers, so I decided to give them a try. I mean, I would have tried them anyway, of course, but getting a dollar off never hurts.
-
I gave the coupon to the cashier. He was not aware of any coupon and he studied it intently for at least a minute, turning it over in his hands three or four times. This amused me. It's not like I made the thing myself; I printed it off the front page of the website.
-
Because the burgers are described on the website as being served on sweet mini buns, I was expecting something like a King's Hawaiian sweet roll. These buns were somewhat sweet, but mostly tough, as if they had been left out overnight. But even if they had been fresh, it would not have saved the burger. The meat was just too lousy. It had obviously been frozen and then overcooked. There was zero flavor to it. The grilled onions were a nice touch and I wished there were more of them.
-
I would say these are better than Burger King's Burger Shots, but just barely. I didn't need to drown these in sauce just to eat them, but the meat is too poor a quality to ever make me want to order these again.
Posted by JustinM at 2:57 PM

Ah, j-in-the-b, I know a guy who once ate 20 of their egg rolls in a single serving! How about a review of all their asian food?

Their egg rolls are pretty good. There is little chance in hell I would try one of their terriyaki bowls, though. (Those look even worse than the taco nachos.)