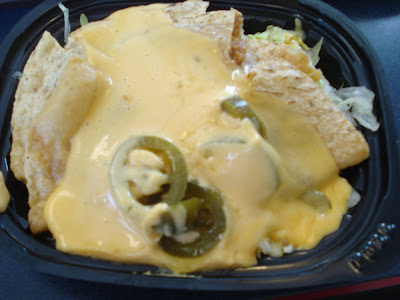 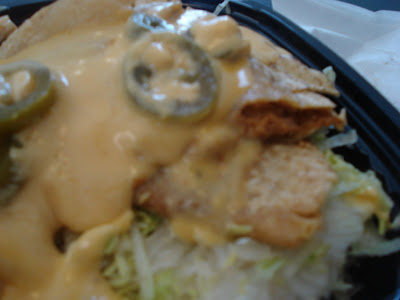 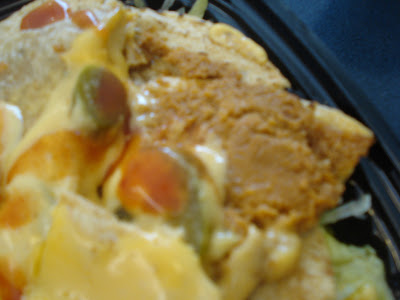 When I first heard that Jack in the Box was coming out with something called "Taco Nachos," I assumed it was a joke. It was around the Super Bowl, when JITB came out with a commercial in which Jack is hit by a bus. I figured this was some kind of tie-in joke, as if maybe Jack had gone crazy and was coming up with ridiculous ideas, or perhaps he was pumped so full of drugs in the hospital that he was high and coming up with ideas that sounded good to him. (Although my freshman year of college there was a guy down the hall who was stoned all the time. He dressed only in black and used to eat razor blades. I have a feeling even he would have thought taco nachos are a little too crazy to serve.)

After trying the mini sirloin burgers yesterday, I figured I might as well try the tacos, too. I know Jack's tacos have somewhat of a cult following, but I've never liked them. Years ago I went out with a girl who was a vegetarian, and she claimed she ate Jack's tacos because they were only soy meat. This seemed dubious, so we went to JITB to find out. The employees had no idea, so we ordered two and decided to dissect them ourselves to find out. Shortly after ordering, we saw a guy put the two tacos in the deep fryer to cook them. This made me extremely happy; her, not so much. "Maybe that's the oil they use solely for vegetarian dishes?" I suggested.

The official press release photos of the taco nachos look very good: big tacos sliced into several pieces and covered with fresh salsa, jalapenos, and melted cheddar. I would be an idiot if I expected them to actually look like that. Still, I was surprised at just how bad they looked. Greasy, wafer-thin tacos drowning under a pool of cheese sauce that was a strange consistency: not the liquid-like state of Cheez Whiz, but not real melted cheese, either. More like a pool of orange jello that wiggled but would not run. Still, I had to eat it for the sake of the blog.

Thankfully, they weren't as bad as they looked. (I'm not sure that would have been possible.) The tacos were lousy, as usual. I pulled one apart and immediately wished I hadn't: the insides look like the "ocean fish" food I give my cat. The cheese sauce wasn't terrible, and after I squirted some hot sauce all over the mess and made sure I got a piece of jalapeno in every bite, the meal had a nice amount of spice to it. The tacos are served on a bed of shredded lettuce, the point of which I do not get. When all the taco pieces were gone, there was still a large amount of cheese floating on the lettuce. I suppose some people might eat that, but not me.
Posted by JustinM at 1:54 PM

I remember when I used to enjoy looking at your food blog pictures, now I think lunch is backing up on me,