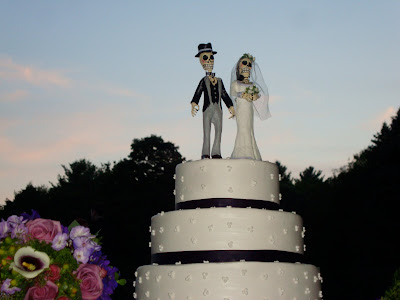 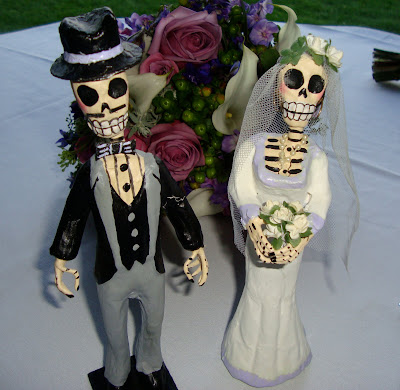 I had planned for today to be my first restaurant post from my New York trip, but I got back later than planned last night and I was pretty damned tired, and more than a little frustrated. (I lost my Virgin America virginity, and let me say, I was not impressed. Not one bit. Other than having nice new airplanes, I cannot think of a single compliment to give them.)

So just a brief picture of the cake from the wedding we went to Saturday. A few months ago I wrote that I had gone down to Olvera Street to pick up "something," but Elizabeth didn't want me to say what it was, on the off chance that one of the 20 or so people who read my blog would coincidentally be at the wedding. Well, this was that something: hand-painted, papier mâché, Dia de Los Muertos wedding cake toppers. They were a big hit with everyone.

Vacation eats starting tomorrow.
Posted by JustinM at 9:40 AM

I love that top photo.

Sorry your return trip was horrible, but glad you're back!

B.T.D.D.S.: Yeah, me too. I'm pretty sure no one was expecting a white couple at a wedding in upstate New York to have those on their cake. It was awesome.

I have been to some spectacular wedding locations (Monterey, Newport Harbor, Foxen Canyon, etc.) but this was my favorite. It was absolutely gorgeous.

SuperLarge: I wouldn't call it horrible, just frustrating. I'm sure it's the kind of experience thousands of travelers deal with every day, but that doesn't make it any less annoying.

I was not all that impressed with them either. I was so excited to fly VA and had heard nothing but great things.

And then they changed our flight to depart earlier than originally planned (you would think that would be good) but instead positioned themselves to be 45-65 minutes late instead of 30 min. late.

And they were late on the way back too. Not impressed with their timeliness at all.

Great wedding cake topper! And sad to hear that Virgin wasn't that great to fly with, I was debating that because their planes look awesome. So far Delta and Jet Blue have been working out ok for me...one more flight and I get gold status on Delta so hopefully it's first class free upgrades from now on!

Well looks like you had fun on your NY trip, I read it backwards but I have been busy at not gotten a chance to get my fix on your blog...I've always wanted to start up a blog like yours but never have the time by the time I finish working so I can live vicariously through your blog!

The planes were the one thing I liked about Virgin America; they were very new. But everything else was disappointing. I sent them a note about my disappointment and they promised to respond within 24 hours. They never did. I'm never flying them again.

You are always welcome to live vicariously here!