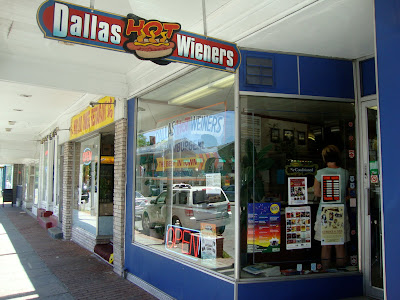 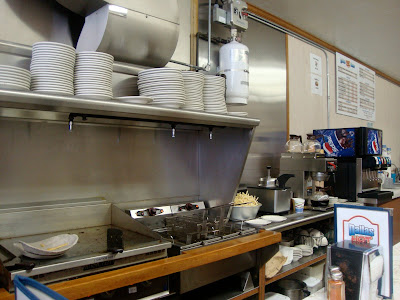 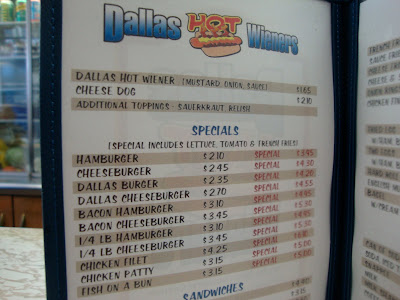 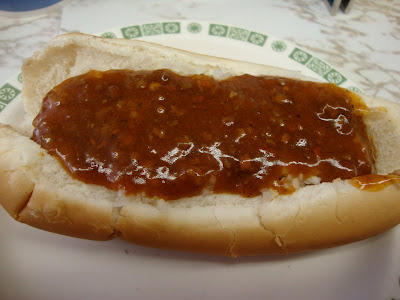 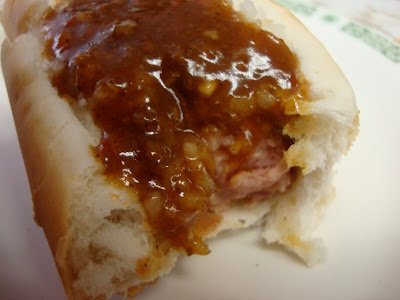 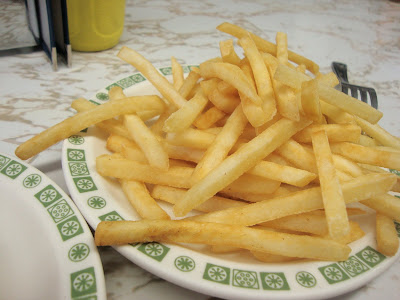 Earlier in the week, Elizabeth's sister, Kate, had mentioned to me that Dallas Hot Wieners has great hot dogs. If there is one thing Kate knows, it's hot wieners, so I very much wanted to try the place. But the week only partly belonged to me - most of the time I was just going along with other people's schedules - so I didn't think I was going to be able to. This is not a complaint, by the way. It was a very fun week and it wasn't about me; it was about Elizabeth's other sister, Dawn, who was getting married.

But I was also hungry, so it came as a nice surprise when I saw one of the three Dallas Hot Wieners locations was on the same street. It was packed when I went inside. Every booth was full and there was a line of at least a half-dozen people waiting to order food to go. There was nothing not to like about this. It seemed like the exact kind of local institution that I love to visit on vacation. Even the fact that their wooden hanging sign outside read "Dallas Hot Wieners" yet the sign printed on the window read "Dallas Hot Weiners" made me happy. There is an old saying that you know a diner is good when there are multiple spellings of it advertised. (Actually, that's not an old saying; I just made it up. But I figured it would have more authority if I ascribed it.)

I took a seat at the lunch counter - what looked like the only seat available in the house - and picked up the menu. I orderd a hot dog, fries and a Coke.

"DOG!" the waitress yelled out loud, clearly audible despite the noise of the place. A man in the corner of the restaurant picked a dog out of a steamer, topped it with sauce and slid it down a line. The waitress poured my drink, picked up the hot dog and waited about thirty seconds to grab my plate of fries that had just been pulled out of the oil. I had my food about forty seconds after I ordered it.

The hot dog was fantastic, with a little mustard and onion, dense and covered in sauce. It was a very thin sauce, which normally I'm not a fan of, but unlike most thin sauces, this one had plenty of meat in it. It was ground very finely. I only had one dog but I considered getting another. I decided not to; I didn't want to be too full for the wedding.

I got my check. It was $4.85. I'm sure that's part of the place's popularity, too: quality hot dogs at cheaper-than-fast-food prices. I paid and fought my way (through the now even-longer line) to get out the door. I'm exaggerating, of course. I didn't really have to fight, but I did have to say excuse me to at least ten people waiting for their to-go orders.

Dallas Hot Wieners was a fantastic find. Often when I encounter a place like this while traveling, I picture an outpost in Old Town Pasadena and try to imagine the lines that would form. Pommes Frites, for example, would almost certainly have long lines at night, particularly after the bars close. Dallas Hot Wieners would probably have long lines all the time. And I would often wait in one, I'm sure.
Posted by JustinM at 9:03 AM

Yep. Every bit as good - better, probably - and very inexpensive. I know that's not a fair comparison, since one is a 75 year old diner in a small town in the Hudson Valley and the other is new place in the San Gabriel Valley. But a much, much better deal.

So, let's see - I buy a plane ticket for $500.00, sit next to the old guy (life is a competition), eat about 100 dogs and I break even financially with my savings over Slaw Dogs and make the old dude look weak.
Way too good an opportunity to miss.