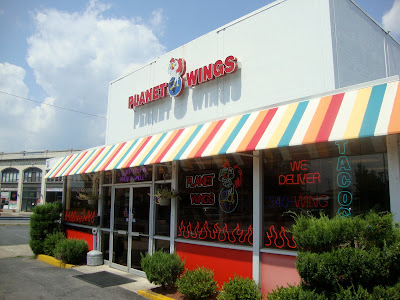 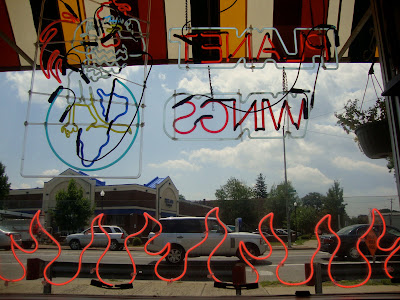 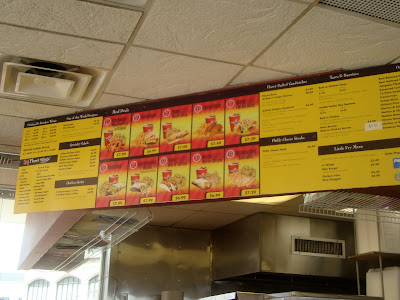 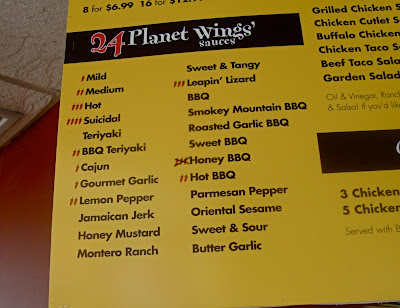 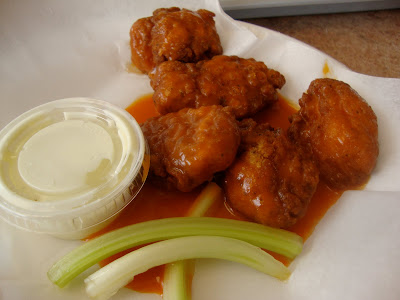 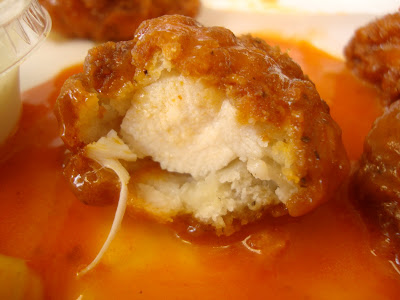 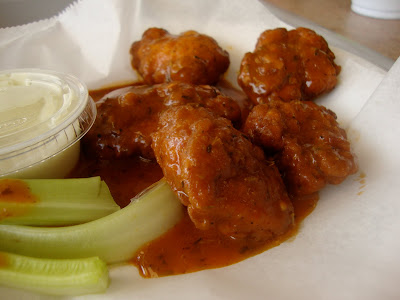 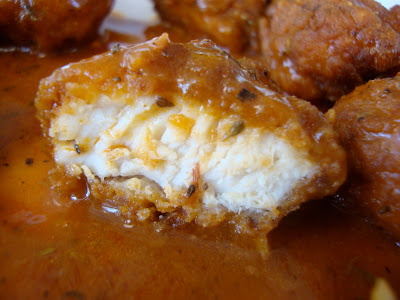 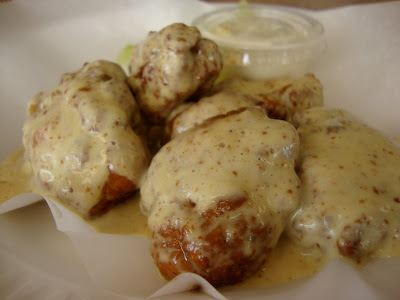 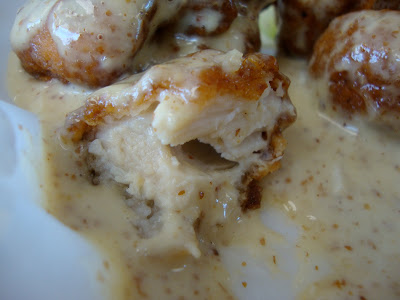 For more than two years there has been a Planet Wings magnet on our refrigerator, although it took me several months before I asked questions about it. I'm often not very inquisitive.

"That's a place in Kingston," Elizabeth told me. "Their wings are great."

My next question was predictable: "How are their boneless wings?"

The list of foods I love more than boneless wings is pretty short: pulled pork, Belgian fries, lobster. That's it. I could probably take Jughead Jones in a boneless wings eating contest. Back when Hooters was open in Pasadena I even ate them there on at least a half-dozen occasions, despite the fact that I always felt sick to my stomach afterward. I would sooner change the channel when Die Hard is on than pass up a plate of boneless wings.

But Elizabeth could not answer me. She had not tried them.

So, being in Kingston - Elizabeth's hometown - for several days, I made sure that we made a stop at Planet Wings. I am always hoping to find boneless wings that are the equal of Wing-It in Boston. I have never succeeded, but then again it's all about the journey in these matters.

There was only one table occupied when we entered: a group of Time Warner service guys who had already finished their lunch. (By the time we left, about 40 minutes later, they were still there, having been joined by quite a few of their colleagues; there were four Time Warner trucks in the lot when we left.)

I studied the menu for a few seconds - there are 24 flavors offered - although I already had a pretty good idea of what I wanted to try. Elizabeth ordered the Honey Mustard boneless wings and I requested two orders of boneless wings: Gourmet Garlic and Jamaican Jerk. (I guessed, correctly, that there would be leftovers and we would snack on them around the pool later in the afternoon.) We got an order of fries to share.

We sat down. And waited. And waited. Considering the only other customers in the place had already finished their food, it seemed like an inordinately long wait. I was hoping these weren't previously frozen chunks of chicken that were being dropped in deep fat fryers, because, if so, they should have been done much earlier. (The boneless wings at Church's, which I think are delicious but I would never call "high quality," take about three minutes to fry.)

After twenty minutes we got our food. They certainly didn't look like anything freshly battered, but I cut into one and it was more tender than I expected. Better than your average chicken nugget? Yes. Good enough to validate a twenty minute wait? No.

I tried the garlic flavor first. It was good but, like a lot of "garlic" wing sauces, it tasted mostly of hot sauce and very little like garlic. Although the menu promised this flavor would have some heat to it, it was mostly mild. Don't get me wrong, I liked it, but I was expecting it to be spicy and garlicky, and it wasn't really either.

The Jamaican Jerk was really good. It was peppery with a little bit of a hot/sweet flavor. I would absolutely get this flavor again. I tried one of Elizabeth's wings. Although the sauce was a very tasty honey mustard, I did not think it complemented the chicken very well. I happily dipped some of our battered fries in it.

Overall I liked Planet Wings, but it was no different than many wing joints I have been in. Certainly it does not belong in the discussion with Wing-It. It's slightly better than fast food quality and the prices are in line with that; it cost about twenty bucks for lunch - slightly more than fast food but certainly cheaper than any sit-down restaurant we ate at (besides breakfast diners) on this trip.

I would gladly go back to Planet Wings. I would like to try some of the flavors like "Leapin' Lizard" and "Sweet & Tangy." But I did not love the place, and I thought going in that I might. From now on when I walk by that magnet on the fridge it won't seem as exciting. My count of enchanted objects have diminished by one.
Posted by JustinM at 9:36 AM

I still think their wings are great. And you should definitely try more flavors, you might find one you're smitten with.

They're very good and certainly better than Wing Street/Wing Stop/Hooters/Chili's, etc. I just wouldn't go so far as to call them great.

That requires far too much logic for me to use when I'm hungry.

Hey don't they have some wings that you have to sign a waiver for? Or am I thinking of another place

No, I don't think they have that at Planet Wings, although I have certainly seen that at several other places.

In conjunction with the launch of Spicier Spicy Chicken, we also launched a new website and competition that you might be interested in. Check out the site at www.spicierspicychickensong.com . We found a fan of Church's Chicken on YouTube and recruited him to help us launch a song competition for the new Spicier Spicy Chicken. Winners can win up to $3000, a year's supply of Church's Chicken and other cash prizes.

Let us know what you think.

Funny thing, Ruben. I stopped by Church's for lunch today with the intention of trying the spicy chicken! But there were about a dozen people in line and I was really in a rush, so I just went home and made a sandwich. I will try it soon, though. I am finishing up my vacation posts this week but I will have the review up next week, I'm sure.