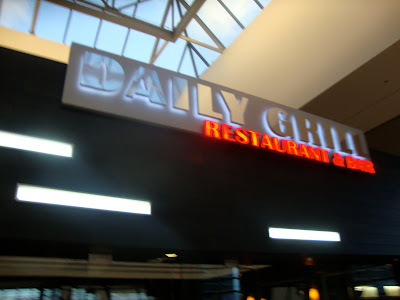 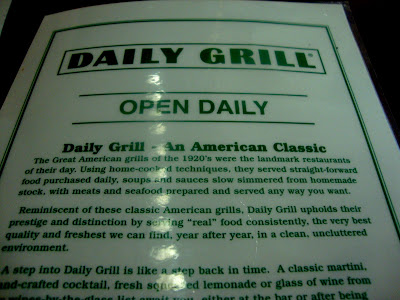 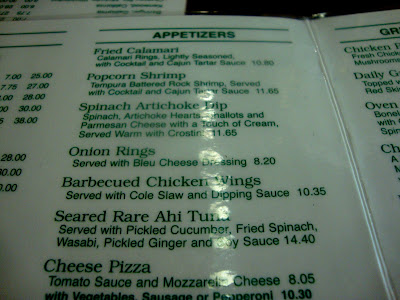 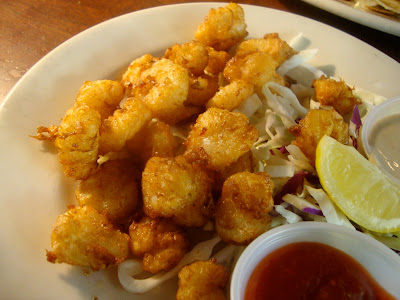 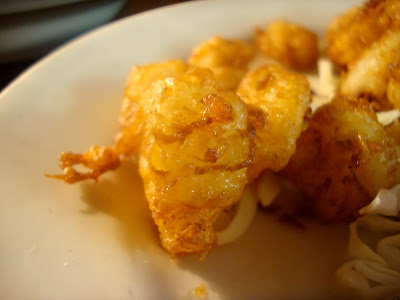 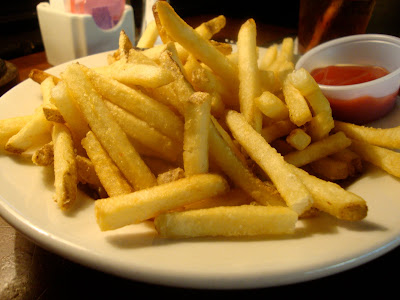 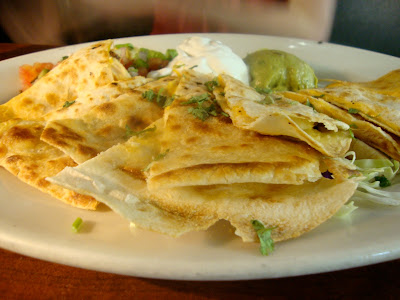 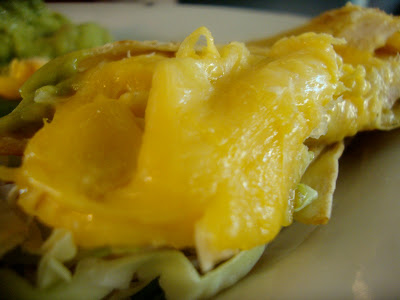 My parents and I picked up Elizabeth after work to go to the airport to start our trip. We didn't think there would be enough time for her to drive home before we left, so as a result we ended up at the airport more than three hours before our flight. We checked in and headed over to the international terminal to get something to eat. Pink's hot dogs had just opened a stand at the airport the previous day, and I considered getting a couple, but I've never been a big fan of Pink's. It's fun to stand in line at Pink's for 45 minutes at least once in your life, but their dogs aren't anything special.

So we decided on the Daily Grill. It has been more than a decade since I've eaten at one, but recently a friend of mine was eating at a non-airport Daily Grill and sent me a text that it was great, so I decided to give this one a try. As soon as we were seated the waitress asked if we were sure we had time to eat before our flight. I thought that was very considerate of her, but before the meal was done I had another, more sinister idea. We'll come back to that.

We felt like some fried seafood (not much of a surprise, we are often up for that). After taking a couple minutes to decide between the popcorn shrimp and the fish & chips, we opted for the former, with an order of fries. Elizabeth ordered a cheese quesadilla as well.

The food did not take too long to arrive, perhaps fifteen minutes. The quesadilla was massive. It was listed as an appetizer, but it's possible the two of us could have split it as a meal. It was pretty dry and we needed to add sour cream and salsa to it. It was okay, but anyone with even the slightest cooking skills could make a much better quesadilla at home.

The popcorn shrimp were fantastic, the perfect balance of batter and shrimp, fried just long enough to get the batter crispy but not overcook the shrimp. I would not hesitate to get these again. (They remind me of the only thing I ever liked from Cheesecake Factory, their own popcorn shrimp, of which they changed the recipe years ago.)

The service was the worst I have had in years. We saw our waitress once, when we placed our order. The food was brought out to us by someone from the kitchen. We had to flag down a busboy just to get our iced teas refilled. It's not like our waitress completely disappeared; she spent quite a lot of time talking in Spanish to a table a couple booths away from us. And she walked by us plenty of times, I'm almost certain intentionally ignoring us. (She served the guy at the table right across from us, and somehow managed to keep her back to us the whole time, not once looking at us, something which could not have been done unintentionally.)

After we'd finished our food and the busboy cleared it, we sat at an empty table for 25 minutes. I waved to the waitress a couple times, I'm sure she saw, but she never came over. I started to wonder if maybe she tries to make people late for their flights, or, at the very least, if she likes to see how many customers she can get to say something along the lines of "Now I am running late." I cannot come up with any other explanation for her behavior.

Finally I walked over to her.

"Are you finished?" she asked innocently, as if she was asking if we wanted more water (something, as I mentioned, she did not do even once).

"Yes," I said, "that is why our table has been cleared for the last 25 minutes."

She rolled her eyes and brought the check 30 seconds later, not looking either of us in the eyes.

I left a tip, however I gave it right to the busboy and told him it was all for him.
Posted by JustinM at 8:59 AM

I can't believe how rude some people can be! It's her JOB to serve you, if she didn't want to do that she certainly shouldn't have that job. I think I would have complained to someone.

(Actually I probably wouldn't have, I'd just have gone home and made a nasty yelp review XD)

If it had happened to me in town, I probably would have complained, or at the very least said something snarky to her. But we were getting ready to board a flight for a vacation that has been many months in the works, and we were both so excited about it. No way in hell was I about to give a worthless server the power to ruin my mood, not even for one second.

I wish to apologize for the very disappointing experience you had at the Daily Grill LAX practically with the service aspect, you certainly deserve better. As the Department manager at Daily Grill LAX I would welcome having the opportunity to speak with you in person. This will allow me to both apologize to you and to help us improve our level at service. My number is 310-215-5180

Thank you for apologizing. Via email is enough, I do not need a personal apology. That service was literally the worst I have experienced in years. If you really would like to apologize, do not worry about making amends with me. You may have my 50 bucks. Just take a hard look at how you hire/train employees. If even a single employee thinks that the level of service we received is acceptable, there is a flaw in the system.

thank you so much for you reply to my offer to chat in person to extend my apologies. Since that seems unlikely,
I would appreciate your sharing with me the actual date you dined with us, the approximate time and a brief description of the woman who served you. This will provide me with the opportunity to review with server what they need to focus or refocus on regarding provide the optimal guest service. This would be exceedingly helpful. Once again, my name is Stephen Parker I am the Dept. Mgr of LAX Daily Grill. 310 215-5180. I genuinely welcome your helping me with the specific information request. Retraining is always a valuable tool when called for and in my humble opinion, in this case, it would be exceedingly useful. Sincerely, Stephen Parker

please let me know the day, date and time you were here so I may work with the server to retraining and insure this never happens again. Stephen Parker Daily Grill Dept. Mgr. 310 251-5180. Why won't you provide this information for me. It would be most helpful.
Stephen

please let me know the day, date and time you were here so I may work with the server to retraining and insure this never happens again. Stephen Parker Daily Grill Dept. Mgr. 310 251-5180. Why won't you provide this information for me. It would be most helpful.
Stephen

Also would you give me a description of the women who served you. Thank you. Stephen

I've always wondered what the pull at Pink's was and thought to myself would I really want to wait in line an hour just for a hot dog...is it that special? I dont think I will now, I just wish slaw dogs was closer to me!

Does the daily grill have anything that is actually grilled? Besides the quesadilla, it all seems deep fried. I'm not having a go, I am fascinated with your blog and the things you can get in that country. The sheer number of different fast food chains is something a little unheard of here.