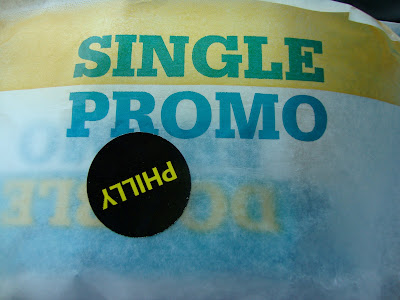 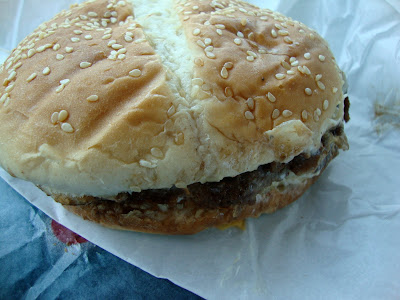 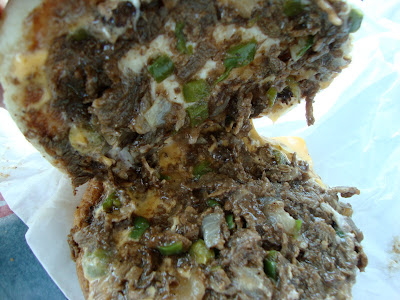 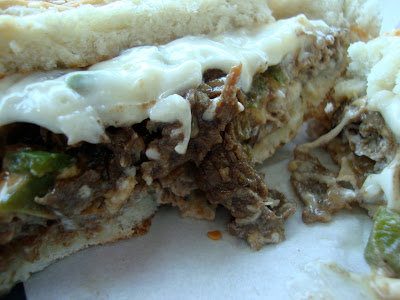 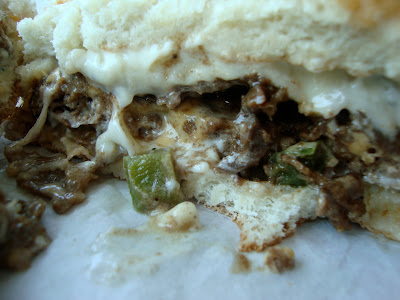 I'm taking a brief break from my New York culinary adventures to say goodbye to an old friend today: Philly's Best, the sandwich shop and shrine to all things Philadelphia crammed into a corner of the Del Mar train station. No, they weren't the best cheesesteaks I have ever had, and it was certainly annoying when I would try to get a sandwich twenty minutes before the advertised closing time only to find that they had already locked up for the night, but they were consistently very good, sometimes great, and they featured in no fewer than ten posts on this blog over the years. That's more than Hutch's, Yujean Kang and Green Street Tavern combined. And, as of Friday the 13th, they are no more.

Elizabeth took the news harder than I did. Our cheesesteak excursions were often at her urging; she loved the place. Having spent roughly 90% of her life in New York, I was always happily surprised that she found a sandwich nearby that she loved. Many New Yorkers I know are extremely dissatisfied with sandwich options in California. (A particularly unlikable woman I met years ago actually said to me "It is impossible to find a good sandwich outside of New York City." When I asked if she had ever been west of the Mississippi, she answered no. I did not bother to continue the conversation.)

We had just been to PetSmart to pick up some cat food when I caught, out of the corner of my eye, the word "cheesesteak" on a sign in the window at Carl's Jr.

"Did you see what that said?" I asked.

She let out a short laugh, the kind of laugh that I chose to believe meant Wow, he is adorable and observant and I am lucky to have him, but in actuality was probably closer to Wow, he is a dork and I can't believe I settled for this. Especially when I then drove around the block so that I could get a better look at the sign.

Sure enough, it advertised a "Philly Cheesesteak Burger." I could see many, many ways that this could go wrong, most specifically the fact that it seemed very similar to the Prime Rib Burger I tried from Carl's Jr. a couple years ago, a hideous grease bomb of fatty meat piled atop an overcooked patty, using - with a disturbing amount of seriousness - the slogan "Meat as a condiment."

Under normal circumstances there would be no way I would try the burger. It would be relegated to the category of "Things I Won't Try Because They Just Look Awful," alongside Burger King's ribs or KFC's Double Down. But there was also something about seeing the sign a day after Philly's Best closed, as if maybe it was calling out to me. A door closes and a window opens. The act of eating a burger as requiem.

"Wanna split one?" I asked my better half.

So I went through the drive-through. I was given the option of the single, double, or "six dollar" versions. I opted for the single: there was only so much effort I was willing to put into this dirge. I parked the car and unwrapped the thing.

I'm not going to mince words here: it looked horrible. In addition to the well-past-fresh bun that is as much a trademark of Carl's Jr. as obnoxious commercials, there were several unsightly pieces of steak falling out from under the bun and some oozing segments of the cheap cheese that most chain fast food joints use. I decided to open the thing up and see how it looked.

That was clearly a mistake.

I'm a firm believer in the maxim of a picture being worth 1000 words, so I will just let you come up with your own description for the steak, onion and bell pepper mix I uncovered.

But we both took bites. It turns out the thing isn't horrible. The steak wasn't very good but it wasn't the fatty junk from the Prime Rib Burger. They were certainly skimpy with the peppers and onions, which isn't surprising for a $4 burger, but then again Philly's Best's sandwiches weren't much more expensive and they were always loaded with toppings.

I am really going to miss Philly's Best. I do have to admit that the Philly Burger was not terrible though. I was surprised.

Too funny. I'm glad you tried it so I dont have to.

The Two Guys are in mourning. We are so going to miss Philly's Best. Wonderful product, lousy location. Seriously one of the best philly subs around.

The extra-frustrating thing is that I have been to the Monrovia and Burbank locations as well, and neither are as good as Pasadena was. But you said it: horrible location.

Noooooooooooooooooo... I loved their Italian hoagie... and the $5 deal... *sniff* and the Cheesesteak was as good as it's going to get in the L.A. area.

On another note, I suppose I should try the Philly Carl's Jr. Burger thing for ze blog. Due diligence and all, but I'm hemming and hawing at this juncture.