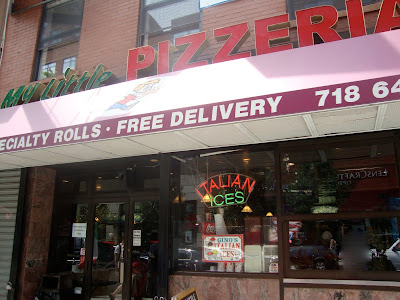 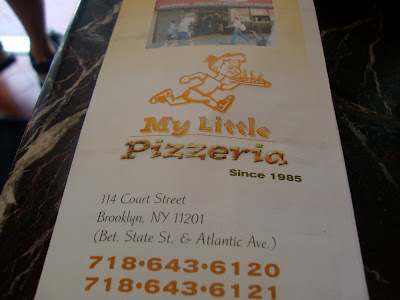 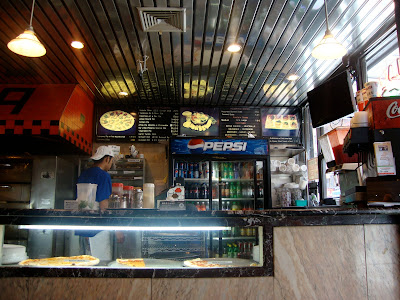 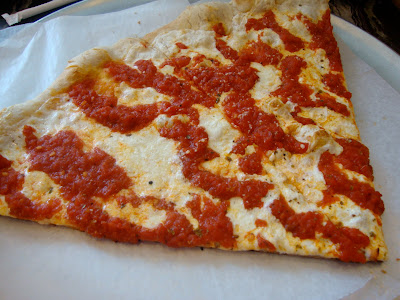 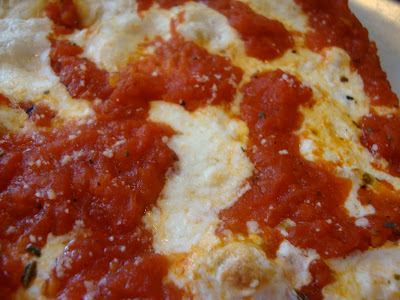 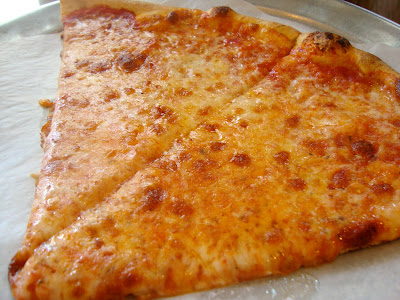 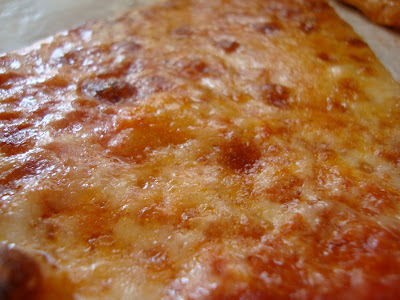 Let's get to the heart of the matter. The wedding of Elizabeth's sister was not the thing that excited me most about visiting New York for the first time in four years. Nor was seeing the two new baseball stadiums. The possibility of a day trip to Cooperstown and the thought of properly poured pints of Guinness were wonderful, but they were not the thing that made me salivate in anticipation.

What I was looking forward to most, of course, was eating New York pizza again. I've had lobster rolls in Maine and pulled pork in North Carolina, fried shrimp on Bourbon Street and green chile tacos at the Albuquerque Amtrak station while a deranged man screamed passages from Revelation at me before pausing to ask how my taco tasted. But the routine to a slice of New York pizza stands alone.

Anyone who has had it knows exactly what I'm talking about. Anyone who has not, I'm afraid I cannot do the description justice. I have never had a bad slice in New York. Without taxing my brain too much, I can think of at least a dozen hole-in-the-wall pizza joints I have known and loved, any one of which, should they be magically transplanted to Los Angeles, would instantly become my favorite slice in the city.

Elizabeth took me to her favorite place: My Little Pizzeria in Brooklyn Heights. Earlier in the day we had walked by Grimaldi's, the pizza restaurant that I have heard referred to as the best in New York City more than any other place. It was just after they had opened and there was a line of no fewer than 50 people stretching down the street, all waiting to get in.

"Is it really that good?" I asked Elizabeth, having never been there myself.

"It is good," she answered, "but I don't think it's that good. Certainly not worth waiting an hour. Where we're going later is even better."

There were only about five people in My Little Pizzeria, and the place looked like a dive. Knowing this means little when it comes to pizza joints, I happily browsed the (slim) selection while Elizabeth ordered two slices of cheese. I decided to get two slices of mozzarella, romano and tomato sauce. As is usually the custom, the slices were thrown into the oven for a couple minutes to reheat them. I eagerly took my first bite of an authentic New York slice in four years, knowing it couldn't live up to memory, hoping it just didn't let me down too much.

It did not let me down even a little. It was outstanding, that unmistakable taste of New York pizza dough, the perfect floppiness to the crust. Maybe it was not as good as Totonno's (the best slice I have ever had), but I can't think of too many other slices better than this.

I tried a bite of Elizabeth's pizza, too. I've never been one for plain cheese slices; at the very least I like a few shakes of crushed red pepper. But, as far as cheese slices go, this one was quite good, slicked with oil (that she was adamant I not remove) and plenty of cheese. Curiously, these slices were much hotter than mine. I wish I had received mine at this temperature. But I wasn't complaining.

As I wrote, there were only five people in the place when we entered, but it became clear that they do a huge take-out business. Just in the fifteen minutes or so that we were there, no fewer than a dozen people came in and purchased slices or picked up whole pies and went on their way.

My Little Pizzeria was great. I have no doubt Grimaldi's is great as well, but if I had to eat every pizza meal at the former for the rest of my life, I would have no problem with that.
Posted by JustinM at 9:25 AM

My friend Roy, himself a Brooklyn native, calls Grimaldi's the "Pinks Hot Dogs" of NYC pizza. One afternoon after taking the train to a Yankee game we walked about 2 blocks from the stadium to a street stand where I had my New York pizza epiphany. It was as you described - unique crust, texture and flavors that I still crave. It's only because I'm a monkey that I can't remember the name of the place. It doesn't really matter - there are soo many great pizza spots in that city!

That's a great way to put it. I haven't had Grimaldi's, so I can't comment, but it does look good. I actually don't think Pink's is even all that good.

In some ways it's better that you can't remember the name of the place. At least it's more romantic that way; a pizza Brigadoon that you were lucky enough to stumble into once.

I love New York pizza, thanks for the pics. Beautiful writing.

My Little is my absolute favorite pizza place. Everyone loves it. They have great garlic knots too!