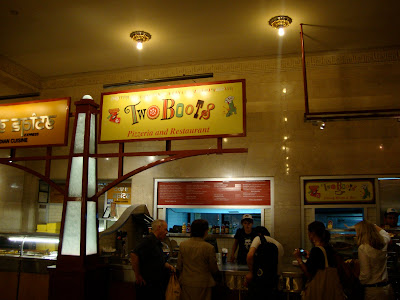 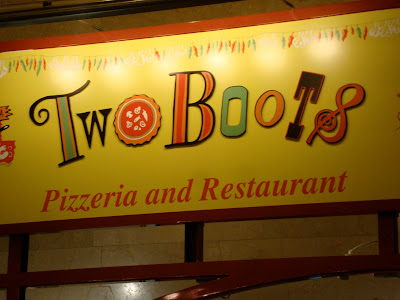 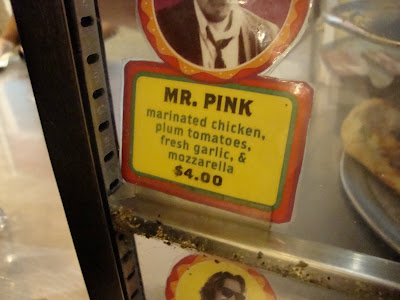 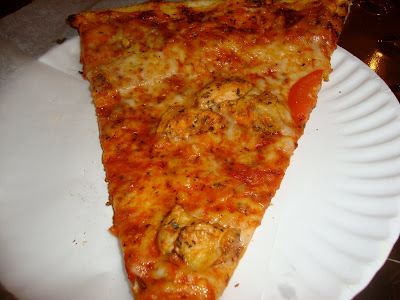 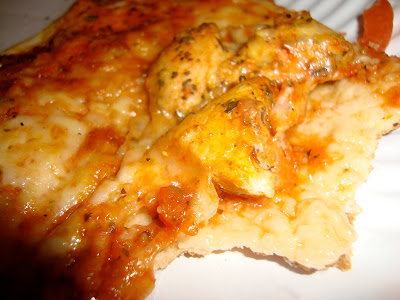 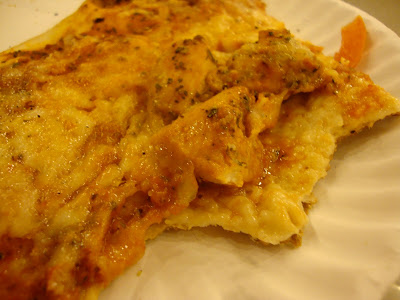 I am nothing if not a servant to my readers. So, when someone asked me to go to Two Boots and get a slice of the Mr. Pink, how could I refuse? It just so happened that, after a ridiculous meal at the Wheeltapper Pub in which I barely consumed enough food to be considered a snack, I had some time to kill in Grand Central while waiting for a train. And I was hungry.

I accept that the restaurants on the dining concourse are probably not going to be as good as their counterparts elsewhere in the city, but I've eaten at a couple of them before and found them to be more than passable. Plus, there was a long line at Two Boots - longer than any of the other stands by a considerable margin - so I figured, if nothing else, at least the pizza would be fresh.

I had not heard of Two Boots before that anonymous comment, but I looked it up immediately, suspecting, correctly, that the Mr. Pink would be named after Steve Buscemi's character in Reservoir Dogs. Buscemi was one of my favorite actors when I was in my early teens, due in no small part to that role. (Although a substantial part of the movie Airheads was filmed in the parking lot of the building my dad worked at in Century City and once, while watching them film, Buscemi ended up right next to me at the coffee cart. I could not believe what a little guy he was. I realize now that almost all actors are smaller than they appear, but at the age of 14 it was a revelation.)

It was also a pleasant surprise to find out that the "two boots" in the title refer to the geographic shapes of Italy and Louisiana. I squealed with delight. Okay, no, I didn't squeal, I pretty much just said "That's cool." But the fact remains that Florence, Italy is my favorite city I have been to in the world and New Orleans is my favorite city in America. My eye was immediately drawn to the "Bayou Beast," a mouth-watering slice of andouille sausage, crawfish, bbq shrimp, jalapenos and mozzarella. But alas, that is not what my reader requested.

The Mr. Pink, as you may have read in the picture, comes with marinated chicken, plum tomatoes, fresh garlic and mozzarella. In other words, three of my absolute most favorite foods... and one thing I can't stand. But, as you may also have noticed, there was barely one sliver of tomato on my slice. (There was a time, actually, when my loathing of tomatoes was so intense that I would not have eaten this slice if it had been served to me with this little bit of tomato on it. I am not exaggerating.) Now, this suited me just fine, although I imagine anyone who had been looking forward to the plum tomatoes would have been quite upset.

The chicken on the slice was delicious - tender and flavorful. I could only taste a slight hint of garlic but it was certainly noticeable. My only disappointment was with the crust. It was much too soggy. I wish my slice had been reheated longer or at a higher temperature. It did not come close to being as good as My Little Pizzeria.

It's impossible for me to form an accurate opinion of Two Boots based on trying it at the train station. I would like to think that if they're charging the same price as at their other locations, they are serving the same quality. But I know that's probably not realistic. Although I don't see myself ever getting Two Boots again at Grand Central, I would absolutely be willing to try one of their other New York locations. And one of these days I will even try the Two Boots here in Los Angeles.
Posted by JustinM at 9:47 AM

Im so bummed you got a soggy slice! The hells kitchen location is awesome and i have to say that the cleopatra jones is my favorite-next time you have to try a slice of that! Glad to know you are still down for trying another location :)

That slice looks like it had been sitting around for quite a while.

I had a big debate with the guys I work with, we had pizza by where I work in Mojave and they started talking about how Chicago style pizza was much better than NY style...pfft

Chicago pizza is great, too, but it's more like a casserole. Give me a couple foldable slices any day.