Teresa's Restaurant (and the Kustard King) 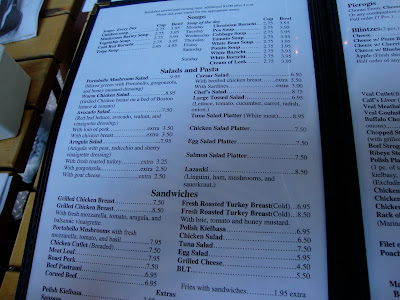 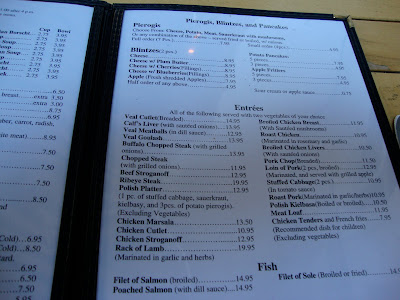 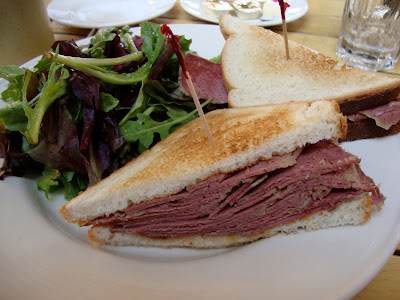 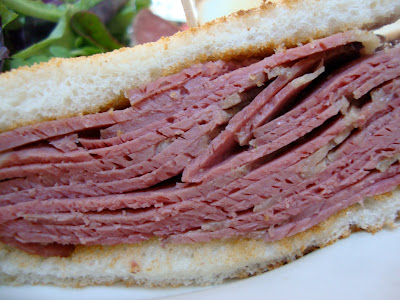 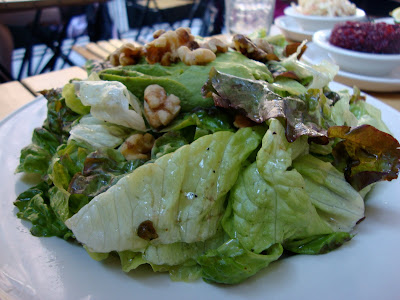 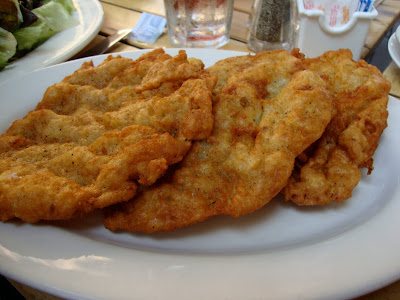 I once wrote about the Heights Cafe in Brooklyn, an unremarkable place I visited years ago, which, I could not have known, was only a block and a half where from where Elizabeth was living at the time. When we became friends long after my meal at Heights Cafe, she informed me that she did not think much of it either, and that immediately next door to it is a restaurant called Teresa's, which, she said, was one of her favorite in Brooklyn Heights.

So, when it was suggested that we go there for dinner, I heartily agreed. For two and a half years I have been suggesting ideas in California (although, to be honest, most of the time I say "Let's just go to Hooters"). I was perfectly fine with being the follower in New York, with a few exceptions, which we will get around to in the next couple weeks.

We sat at a sidewalk table and I perused the menu. Teresa's is something of a cross between a Polish restaurant and an upscale diner. There are plenty of veal and calf dishes, with a section of pierogis and another of blintzes. There are also plenty of sandwiches and a large selection of salads.

I decided to get the pastrami sandwich. Elizabeth ordered the avocado salad. She had told me in the past and reminded me once again that the potato pancakes at Teresa's are the best she has ever had. That is quite a statement coming from her, so we had to get an order.

The food took a good while to come out. The service was pretty bad, although I was assured this was an anomaly. ("This is the only time I have ever had bad service here.") Everything looked good when it arrived, but my eyes were immediately drawn to the potato pancakes - giant, frisbee-sized discs, bronzed the color of a swimsuit model's legs.

I tried the pancakes first. They were very tasty, although I can't say they are the best I have ever had. The latkes I am used to eating are fried crisper and seasoned more. These were rather bland, although, if the taste of the potato is what appeals to you most about a potato pancake, I suppose these would be preferable.

My sandwich was very good. I thought it looked small when it arrived, but the meat was packed in pretty densely, and it was very lean. Often pastrami is riddled with fat and few giant pieces fall away (or I remove them) and the sandwich you're left with isn't nearly as big as it first looked. But there was almost not fat to this sandwich, and I ate every bite, applying spicy mustard from a squeeze bottled that was provided.

I did not bother trying Elizabeth's avocado salad, but she loved it.

It was a ridiculously hot and humid day, setting records in some parts of the city, but the humidity had broken a little by the end of the day. After dinner we walked down to the Promenade, sat on a bench for a while and watched the sun set over the harbor. 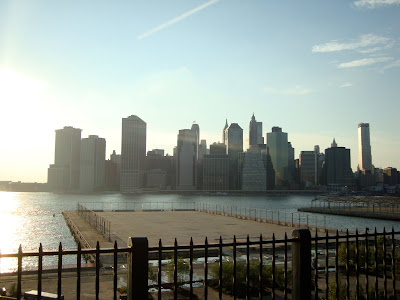 A block away Elizabeth spotted an ice cream truck.

"Maybe they have cherry-dipped cones," she said.

In the last couple years we have been to many, many places around Southern California looking for a great cherry-dipped ice cream cone. We have yet to find it. Every once in a while we come across a place with chocolate-dipped, but never cherry.

I looked at the truck. I thought it read "Mustard King."

But we walked over to it anyway and I realized my mistake; I was off by one letter: 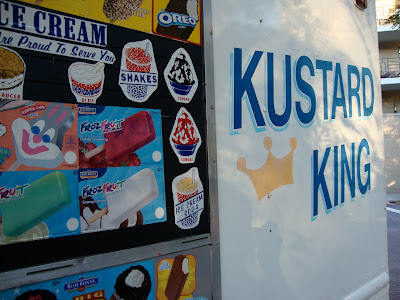 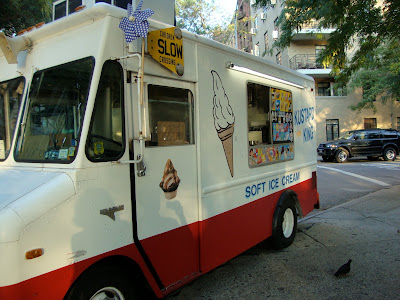 They did not have cherry-dipped cones on their menu, though, so Elizabeth started walking away. I was not ready to give up just yet.

"Do you have cherry-dipped cones?" I asked.

"Yes," the man said, before adding sheepishly, "but they're three dollars."

I don't think he realized that he could have said they were thirty dollars and I still would have reached for my wallet at the same speed. 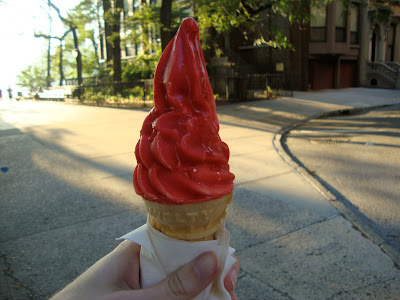 So Elizabeth got her cherry-dipped cone. I had a few bites myself, perhaps the first time in twenty years that I have tried one. My God, it was good.
Posted by JustinM at 12:59 PM

This is almost as good as being on vacation myself.

Oh wow, I had completely forgotten about those. Now I am sitting at my desk drooling for one.

Funny you say that. Our friends Carla and Tracie were over for dinner the other night and we were showing them some pics from the trip. Tracie saw this last pic and said "Wow, what is that?"

Carla, who lived in New York 20 years ago, said almost the exact same thing as you just did: "I had completely forgotten about cherry-dipped cones. They are so good. Oh man, now I want one!"

1st in 20yrs since u had an ice cream cone?? What u have against them?

First cherry-dipped cone in 20 years. It's probably only been five years or so since I've had an ice cream cone. I just am not a big fan of desserts. If I am still hungry after a meal, I don't want something sweet. I'll just eat more real food.

i am really enjoying your food journey in new york. and i think that is so sweet that you would pay $30 for a cherry-dipped cone for liz.

Thanks, Amy. Glad you like it. It will keep getting better, in my opinion.

$30 is the maximum I place on Liz's happiness, though. So it's not really that sweet...

After searching for years here and to no avail, that cherry-dipped cone was so satisfying. It was a perfect end to a wonderful day in Brooklyn.

Interesting! I'v never even heard of a cherry-dipped cone? Is it a cherry syrup or is it like chocolate where it hardens into a shell?

The latter is exactly what it is. Every once in a while I see a place in California that offers the chocolate version, but never the cherry. I think maybe I saw it years ago at a Dairy Queen up in Northern California, but I'm not sure.

Kustard King's got nothing on Mr. Softee...next time if you guys are in Brooklyn during October it might be worth a visit to Henry's. They have a wild boar festival and depending on if you catch it you can get some pretty out of the ordinary things on their menu, we tried their signature turtle soup and it was very good as well as their elk chop and rabbit ragu pasta.

Away From Our Heritage Admin said...

I moved to ny from another state...n where i was, the mr softees were long gone. apparently grandad was a comissioner way back when and had helped get rid of them...the prick. ahem. i finally caught up with a mr softee last week n nabbed me the cherry dip. i hadn't enjoyed mr softee in ages, though i do enjoy dessert/candy (read nutrional food) items regularly. :)