We were in Manhattan and had been thinking of going to the Mets-Cardinals game at Citi Field, but all of the inexpensive tickets were sold out. We kind of wanted to see a game at the new ballpark, but Elizabeth is a Yankees fan and I am an Angels fan. (We missed seeing the Yankees and Angels at the new Yankee Stadium by two days, unfortunately.) She strongly dislikes the Mets. I don't care about either team. So instead of buying expensive tickets to see a game we really didn't care about at all, we decided to go to some bars. I love Guinness and the pints in New York are much better than most in California, and I had a strong desire for some. 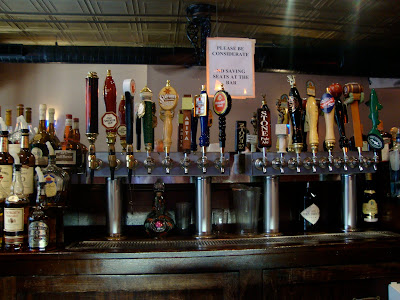 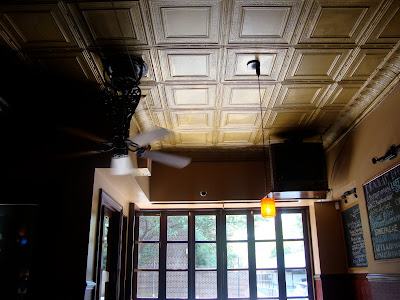 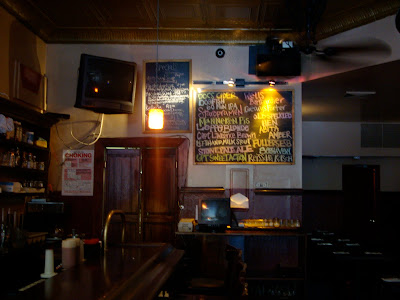 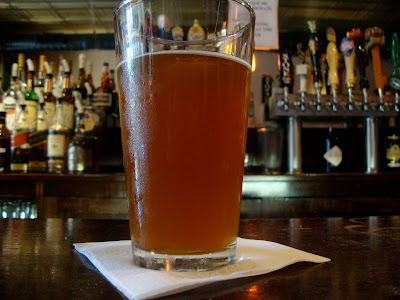 It was a blisteringly hot day. Locals were complaining about the weather. The news said records were set in several parts of the city. We had just walked for miles, checking out lots of the sites. We both were very thirsty. Elizabeth had been to the Henry Street Ale House before and said it was cool, although she added that she had never been in there in the middle of the day.

We were the only people there. I liked the place very much. It was attractive but small. I asked how it was when crowded. She said it gets really crowded, and she has left before because it's been too much. I asked for something local (there was no Guinness); the bartender poured me a beer. It was delicious and I had two of them. I wish I could remember the name. 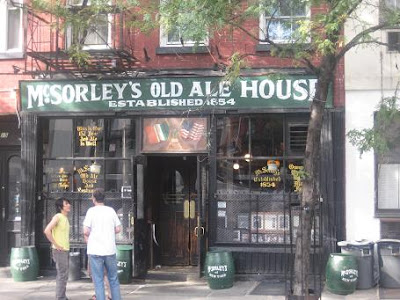 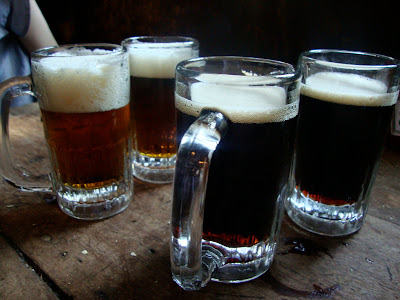 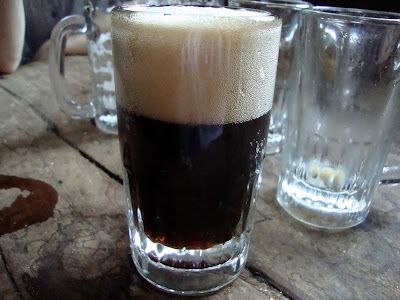 McSorley's Old Ale House is probably my second-favorite bar in America. Established in 1854 (although women weren't allowed until 1970), McSorley's serves one thing to drink: ale. You can order it light or dark and each beer is actually two half-pints, poured with remarkable speed by the bartender. (Our bartender on this day said he had been working there forty years.) Elizabeth ordered light, I had dark. 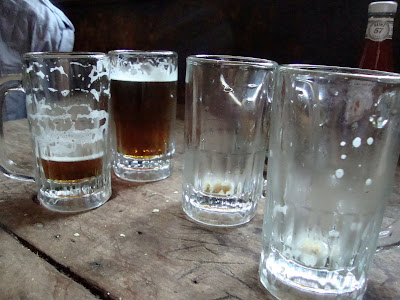 I drank mine much faster than she did. So I got up and got myself another. This ale (you will be corrected if you call it "beer") is very, very good. We were settled into the corner of the joint, admiring all the old photos on the walls, and we considered sticking around for a while. But we decided to try some other places. 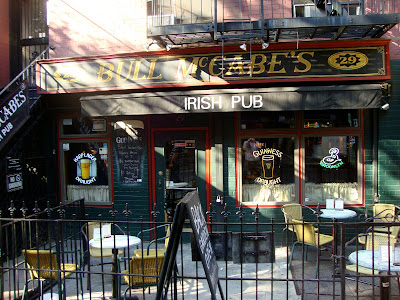 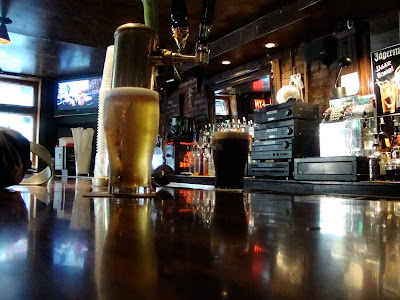 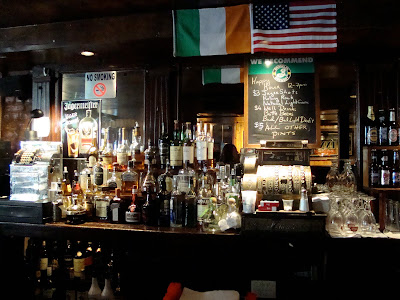 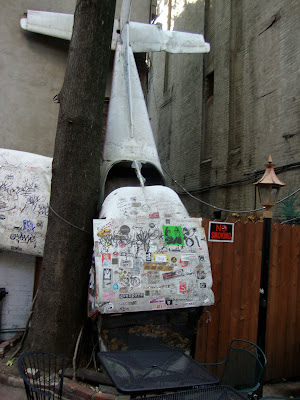 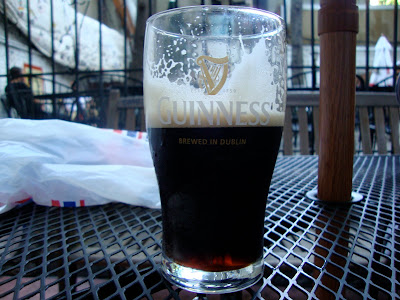 We walked by Bull McCabe's and it looked like it would have a nice pint of Guinness, so we ducked inside. And indeed they do pour a nice pint. We wandered out onto the patio for a while and noticed an airplane in the courtyard. The bartender told us a (possibly apocryphal) story about the owner of the bar cutting it up one night and putting it in the yard. I do not remember all the details of the story. 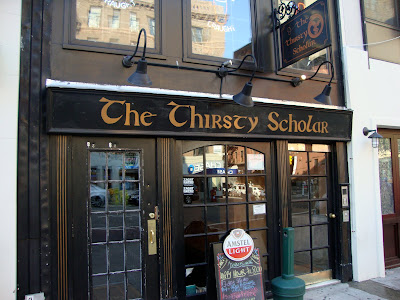 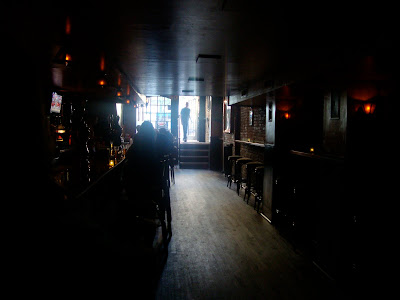 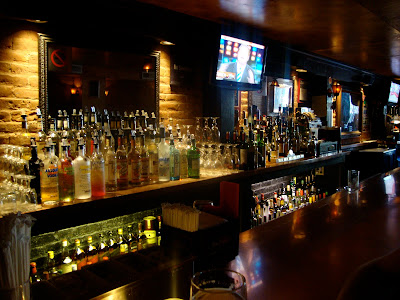 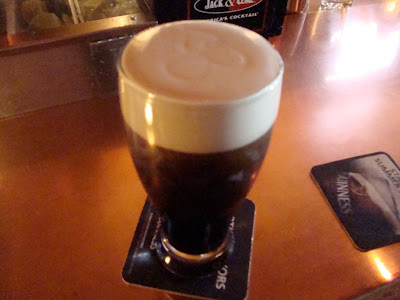 We were walking around taking pictures when I noticed the Thirsty Scholar. The name was too good to pass up. It was a dark, downstairs bar, beautifully decorated and very cold, which felt good on such a hot day.

I had a pint of Guinness that was as close to perfect as I have had in America: smooth, creamy, and cold. It was like drinking a light milkshake. We also considered staying in this bar for a while, but it was getting towards late afternoon and we wanted to walk around some more, so we only had one pint. I noticed an electronic dart board and asked Elizabeth if she wanted to play. 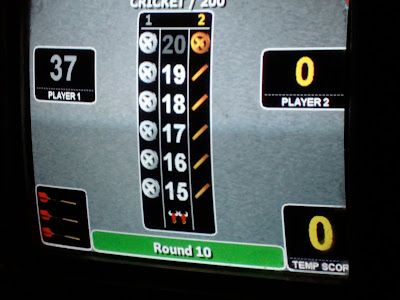 Elizabeth is smarter, prettier, and more successful than I, and yeah she has better personal hygiene and doesn't waste her weekends watching Die Hard repeatedly... but at least I can whip her at darts. 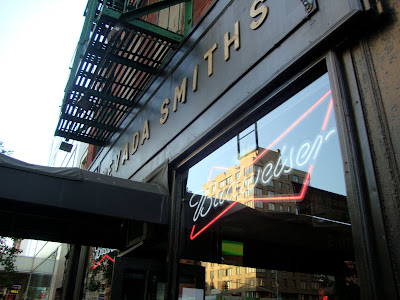 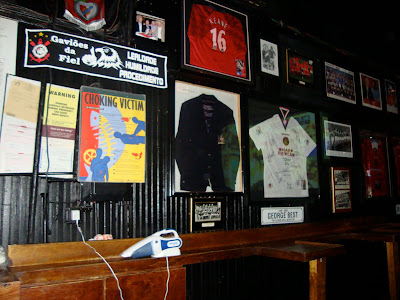 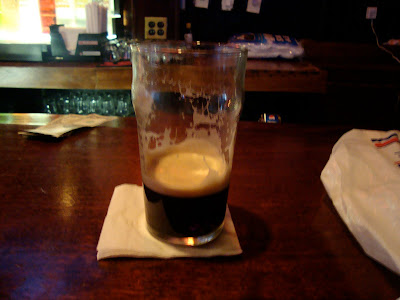 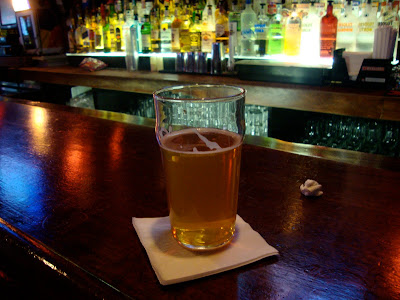 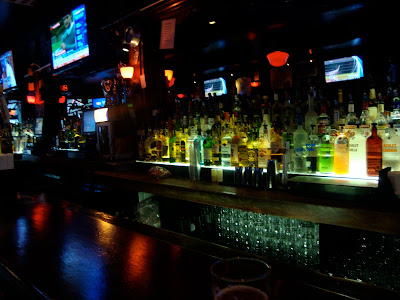 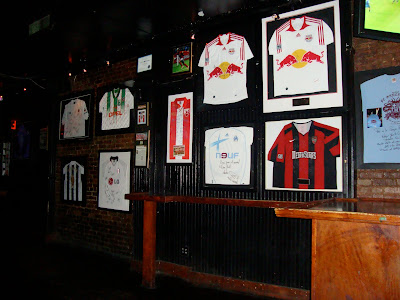 Elizabeth wanted me to see Nevada Smith's, a soccer-themed bar. Why, I have no idea. I'm not really a big soccer fan. But they did a good pint of Guinness and the bartender was a very nice girl from a town in Ireland that I had once been to. We stayed for a couple beers before we had to catch the train home.

(Note: we went to another place called Beauty Bar which, as the name sort of suggests, is a beauty salon and bar. We had one drink at the bar while women were getting their nails and hair done just behind us. But I am not including any photos of the place. It was dark inside and the photos came out poorly, plus the beer selection was lousy and all I had was a Corona.)
Posted by JustinM at 12:05 PM

I am going to cry misty tears of envy... perhaps these tears would be like the foamy head on that lovely Guinness... I could only hope.

Why can't there be someplace close to (or in) P-town with a similar plethora of options?

Do you have any idea how many times that question has come up over the years? Why a city the size of Pasadena doesn't have one real pub?

Years ago there was a rumor that an Irish Pub Company pub was being considered for the "cursed" location of the most recently departed Brix 42. I think this was just before the Pasadena Brewing Company moved in. But whoever was considering it apparently didn't want any part of the location. But then again these were just rumors. (Although I heard them from someone who is very in-the-know about these things.)

All of those pubs seem like very desrable places to while away the hours - and ANY of them could be cloned in Pasadowner.
It really is a mystery why it hasn't been done; with the exception of the OLD John Bull which closed in 1984. Even its later manifestation missed the mark by a mile.

The "new" John Bull closed just a few months after I turned 21, but I went there a few times and really liked it. But it would be 9PM on a Saturday night and there would be perhaps 5 people in the whole place. It was bizarre and I never understood why it wasn't more crowded (or, I guess, crowded at all). In later years I would hear stories about what the place used to be like, including at the old location, and it sounded like it had become a shell of what it used to be. I was just there for the death rattle.

The lack of any real pub type joints probably has a lot to do with a couple of factors:
1. Investors who are looking for a "safe" concept, or to copy some other half-assed "already proven" set-up like Yardhouse.
2. If you manage to find open-minded investors, you run into an ever increasing lemming factor amongst the dining & drinking public.

Reminds me of a few days ago when my buddy called looking for some decent eats in Old Town Pas. He, his wife, and his sons sports agent were all going to meet for dinner in OT and I suggested Green St. Tavern, with Tre Venezie or Santorini as a backup (a wee different thematically I know). He said thanks and proceeded to look the joints up online. Keep in mind my buddy and his wife are GREAT people, but they've been living in cookie-cutter suburbia for far too long... anywho, long story short I spoke with my pal the next day and asked where he went, how he liked, etc. He point blank told me that he thought the places looked nice online, and they had the food type they were craving, but they ended up eating at the Cheesefu*kingcake Factory! Moral of the story? Some folks just plain ol' prefer the security of mediocrity. I guess if they ever did try and open up a NY style pub 'round these parts they'd have to name it Yard Pub. Rant over...

Cheesecake Fuctory is what I should have said... just had to get that out of the system.

You did kill me in darts. I was more interested in the beer anyway. Good times! Wish we were back there now.