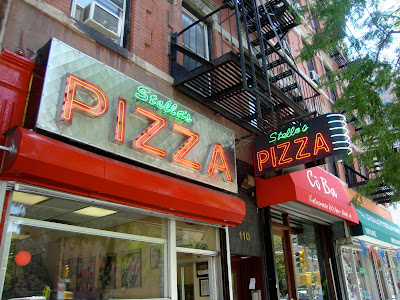 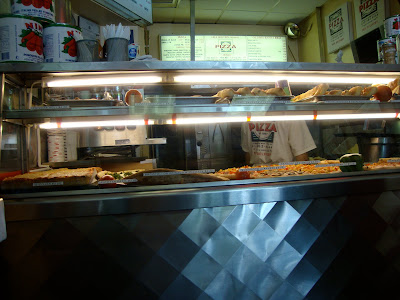 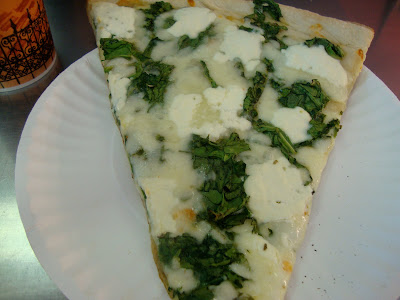 I was walking around Chelsea, as I wrote yesterday, working up an appetite to demolish another epic sandwich from Dickson's Farmstand Meats, when I passed by Stella's Pizza on 9th Ave. It was a really hot day and I was assaulted by the dual blast of air conditioning and amazing smells. I ducked inside.

"Which pizza smells so good?" I inquired.

I changed my sandwich plan and decided to get a slice of pizza.

I had to wait for several minutes, although there was only one person ahead of me. But she was the type of person I have seen many times in pizza-by-the-slice joints: the person who is being difficult for no other reason than to be difficult. "Take some of the pepperoni off that slice and put it on that one." "Cook one slice extra long, but don't cook the other one very much at all." "Get me some fresher chili flakes than these." "Stick my head in the oven and put me out of my misery because I am a horrible person, incapable of saying 'please' or 'thank you.'"

Okay, she didn't really say that last one. But all the others were direct quotes. She got her slices and sat down at the counter. (Although there was no one else in the place, after I got my slices I sat down right next to her, knowing she would move. Which she did. Immature of me? Probably. Did it feel good after seeing how rude she was to the guys working behind the counter? Definitely.)

There was a sign for ricotta and basil pizza, something I don't believe I have ever tried before. I ordered a slice of it. "We're all out," I was told. So I opted for the ricotta and spinach. After it was heated I took a look at the slice. There was a nice amount of cheese and spinach on it for the $2.50 cost.

I noticed two things upon the first bite: 1) the crust was crispy. Not just firm, but crispy. I don't think I would like an entire pizza with a crust of this consistency, but for one slice it was kind of cool. And 2) there was almost no sauce on it. I've never been one for pizzas without sauce - especially when they have a lot of cheese - but for just the one slice, it was a nice touch. I could taste the cheese - and there was even more cheese on it that it appeared - and the spinach, and there was no sauce to interfere with those tastes.

I definitely liked Stella's - as I wrote the other day, I have yet to encounter a pizza joint in New York City that I have not liked - but nowhere near as much as I liked My Little Pizzeria. I will almost certainly visit the latter again, but I doubt I will ever return to Stella's. If it were in Pasadena, I definitely would, but there are just far too many other places to try in New York.
Posted by JustinM at 9:08 AM

haha, i love that you sat right next to that lady.

I had just walked about 3 or 4 miles on a 90 degree New York day. I bet I smelled really bad, too.

That was just beautiful. *golf clap*

I concur with everyone else. I think it was a great gesture.

You should have taken a picture of her eating just to see what her reaction would be.

Another vote for your behavior. Far funnier than just calling her a bitch would have been.

That's the thing with pizza in NYC - if you don't love it, keep searching! Any more pizza coming up?