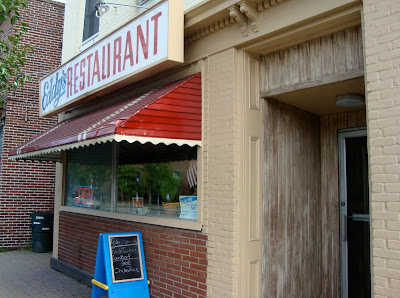 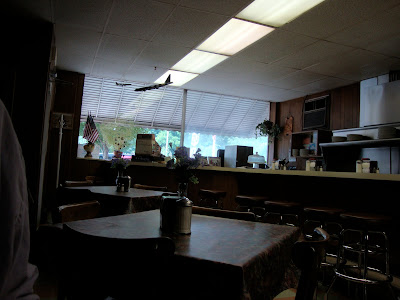 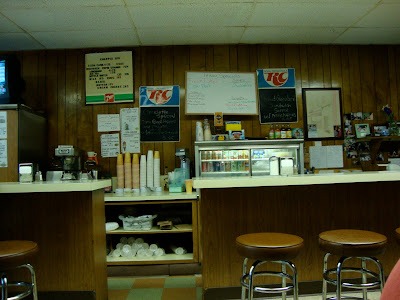 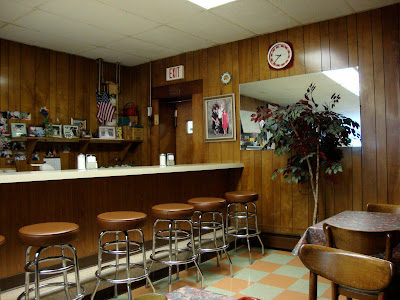 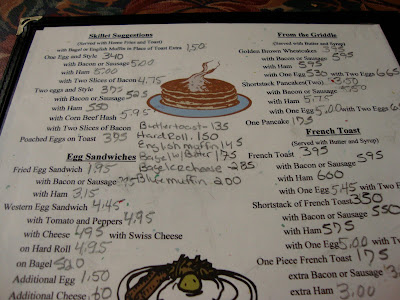 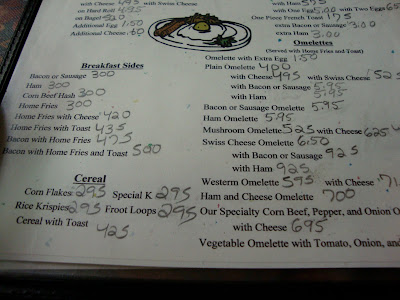 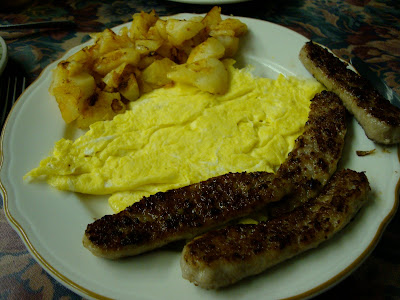 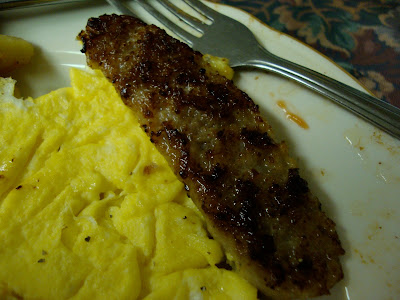 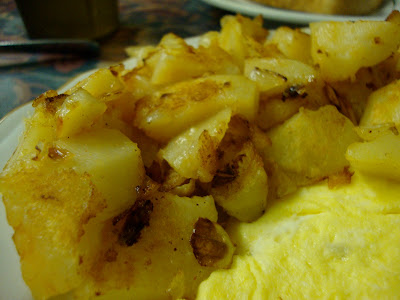 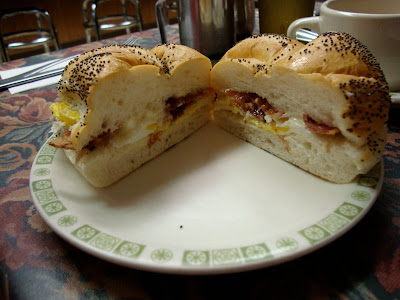 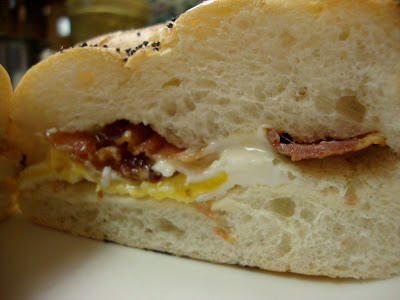 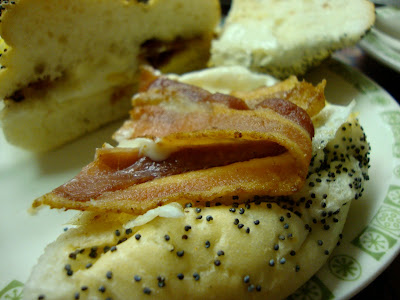 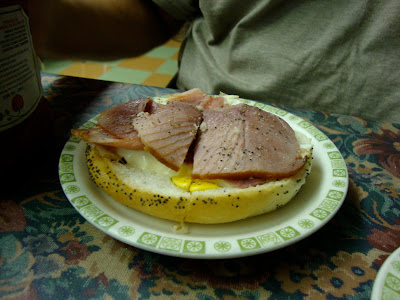 Elizabeth's dad offered to take us to breakfast at Eddy's and she accepted with remarkable speed, the same way she reacts affirmatively when I ask if she wants to go to the farmers market and get cotton candy (or negatively when I ask if she wants to watch Wild Hogs with me). She has told me about the place for quite a while - about the whole turkey the owner cooks every day, about the quality of the breakfast sandwiches, about the hash browns. I was actually kind of excited to go there... and I don't really like breakfast.

We wandered in there in the morning and Elizabeth's dad, Rick, was greeted warmly by the owner. (Rick was a police officer in Kingston for twenty years; I am not exaggerating when I say that in every single place we went over the weekend he saw someone he knew, and usually it was more than one person.) I was introduced to the owner as a "food journalist," a slightly-embarrassing, extreme exaggeration, but one that I nonetheless did nothing to correct.

We sat down at a table and looked at the menus, or rather I did, as it quickly became apparent that Elizabeth and Rick knew the menu by heart. It was a mash-up of printed items and handwritten items and prices, as quintessential a piece of coffee shop-culture as the calendars on the wall. (In William Least Heat Moon's Blue Highways, he reveals his system for rating diners, something so brilliantly simple it must be accurate: the more calendars on the wall, the better the diner. For what it's worth I forgot to look for calendars in Eddy's but I'm guessing there were at least a couple.)

But the menu did not intimidate me, for I was pretty sure I knew the routine at a place like this: order what you want. If they have it they will fix it and charge you accordingly, most likely a cheaper rate than you are expecting. If they do not have it they will not be shy about telling you, usually with an accompanying recommendation barked out like a drill instructor. (Once at a roadside diner in Arizona I merely asked if they had turkey sausage and was greeted with a "Don't have turkey sausage! Get regular sausage, it tastes better and it's cheaper!" that I imagine passing motorists out on the highway could have heard.)

This was only about 9 in the morning but it was obvious the breakfast rush was over. For a bit we were the only people in the place (before two guys entered and took seats at the counter, one of whom Rick knew). Our food only took a few minutes to come out. Right before it did, I noticed a special on the wall, something I had not seen because a customer had been sitting there earlier: an omelet with corned beef, peppers and onions. How I wished I'd seen that.

At any rate, my breakfast was great. The scrambled eggs weren't anything special (not that I'd been expecting anything special; the appeal of places like this to me is the familiarity of the dishes), but the sausage was the best I remember having. It was slightly charred on the outside and juicy and full of flavor inside. The potatoes were very good (but I have to say I liked Grand Canyon's more).

Elizabeth gave me a bite of her sandwich. It was outstanding, another breakfast sandwich that managed to combine perfectly crispy bacon with a perfectly soft roll. I tried two breakfast sandwiches during my 8 days in New York; both were better than any I have ever had in California. Again she was unable to finish her sandwich and I selflessly stepped in to help.

I loved Eddy's. It's the kind of place you want to linger in and drink coffee long after your meal is done; the kind of place everyone seems to have a story to share, even if they've been in the day before; the kind of place no marketing consultant could ever duplicate, even with an unlimited budget. The walls are covered with hundreds of 4" x 6" photos of the customers. Every sign in the place is written by hand, even the "apartment for rent" signs tacked to the wall. I'd obviously never been in there before, but I could feel the aggregate of memories in the place as surely as I felt the air conditioning.

It wasn't the best restaurant I ate at on the trip. It's probably not even in the top 10. But it's the place I will remember most. If this makes sense to you, I am honored to have you as a reader.

I asked Rick how long the place had been open.

"Well," he started, before pausing, seemingly amazed with each passing second that it took to recount the years. "It was the year I joined the [Police] Department... so that must be 1970.... Geez... forty years."

That's long before Elizabeth and I existed and I would like to think Eddy's will be around long after we're gone, but I know it probably won't. Out by the highway are the usual suspects of chain restaurants, the Applebee's/Olive Garden/Texas Roadhouse outlets that always seem to have customers no matter where they are (despite the fact that I have yet to meet someone who likes any of those places).

As long as people would rather have food cooked for them by the owner of a restaurant, who talks to them as he or she cooks and genuinely cares about their responses, places like Eddy's will survive. I just am not sure how much longer that will be.
Posted by JustinM at 9:42 AM

I love the writing in these vacation posts. You should go on "vacation" in L.A. and write from that perspective.

Anon 1: First, thank you for not using the term "staycation." Unfortunately, I always forget how expensive New York is, so there probably won't be any vacations for the rest of the summer, either at home or away. It's still a good idea, though.

Anon 2: Is that better than Red Lobster's Crab Fest?

Eddys is the last of the clean grills in town that still uses butter! The place is clean, the food fresh the trukey fresh everyday! One of the best kept secrets in Kingston!

Not anymore, I'm afraid. Now at least a dozen people know about it...

Nope, that comment above wasn't me. A fellow Eddy's fan though I see! Every weekend I would be upstate visiting my parents my dad would take me there or at the very least offer to. It's a great tradition and every single time is really good food. Plus I love butter!

Nothing good can come from the words "crab fest"

Oh man I miss little spots like that in upstate NY, I used to work way up by Plattsburgh 2 years ago and we would go to a diner every morning after awhile they would know our orders and they had no set prices on the menu since we would just order whatever we felt like.

I haven't been to Eddy's in 20 years. I moved out of Kingston in November of 1990. Glad to see that it's still there, and hasn't changed at all. My mom worked there when I was a kid, and the greek family that owned it were the best. Thanks for posting this.

That's awesome, Jack. I'm guessing lots of people who were/are close to the place have many stories about it.

There used to be some characters that would come into that place. If my mom were still with us, she'd tell you some stories that would make you fall out of your chair laughing. I'm going to visit some friends next year, and have already told them we are going here. I posted a link to your page on my facebook page. I'll be sure to take plenty of pictures and share. I'm gonna do a whole 20 years later retrospect on my life in Kingston kinda thing.

Please check back in when you do - I would love to hear your take, and I know Elizabeth would, too.