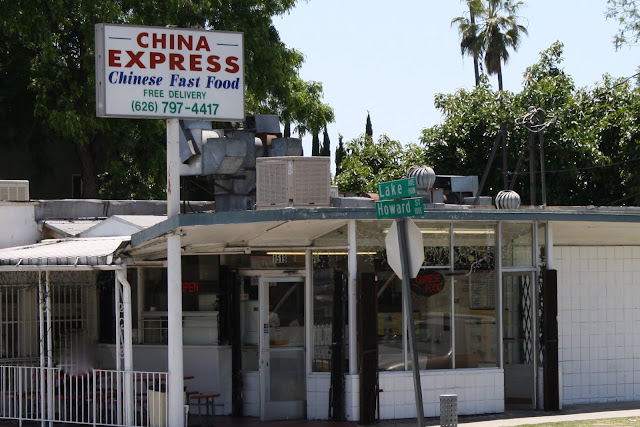 One Sunday afternoon a few months back, Elizabeth and I were driving up Lake Ave, going to check out the view from the mountains, when I noticed China Express. I'm sure I'd seen it before at some point but I had no memory of it. The place is as unremarkable as they come, as you can probably see above.

"Want to go there?" I asked Elizabeth.

But I love Chinese food, no matter how Americanized it may be, so the other day when I was craving some, I decided to give China Express a try. It was packed when I walked in; seemingly every 15 seconds one of the women behind the counter was handing a plastic bag of food to a customer. Some were eating at the few tables but most were taking their food to go. They must go through a ton of ingredients, I thought to myself. Hopefully it'll be fresh. 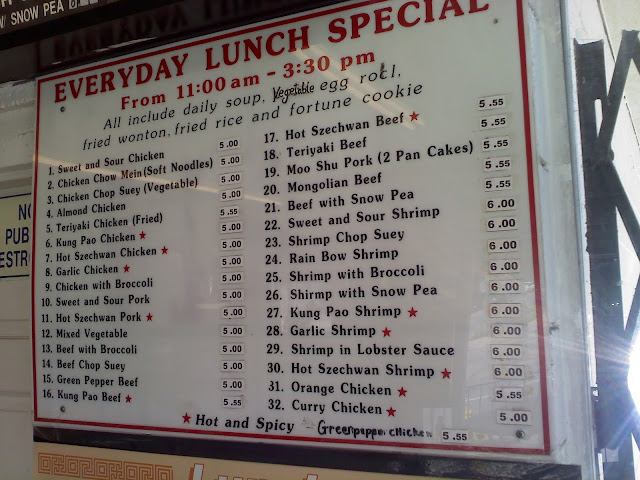 Like many Chinese places, there are lunch specials that come with soup, an egg roll, a fried wonton, fried rice and a fortune cookie. I snapped a picture with my camera phone. I did not feel like being adventurous so I ordered the sweet & sour chicken. The total was $5.49. 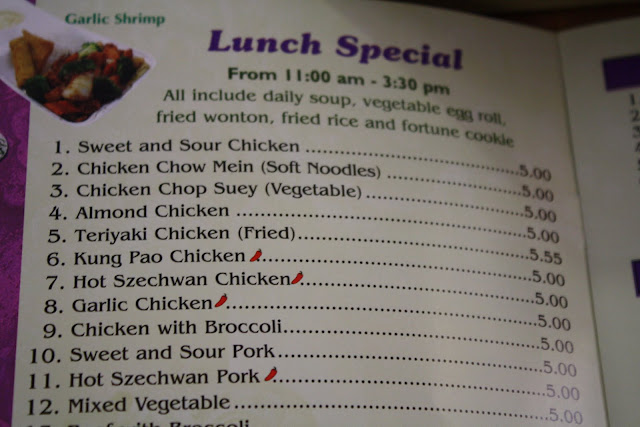 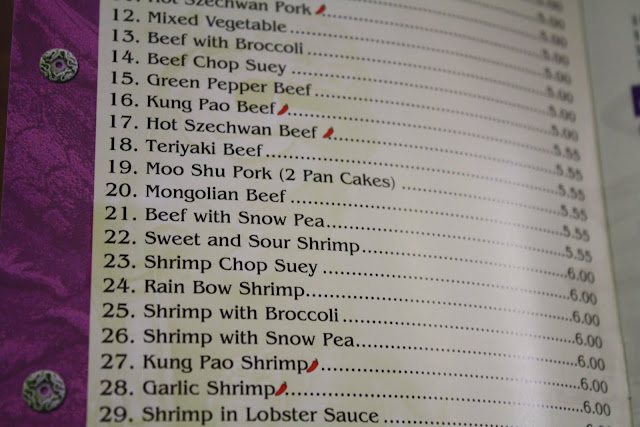 Here's a better picture of the lunch specials. 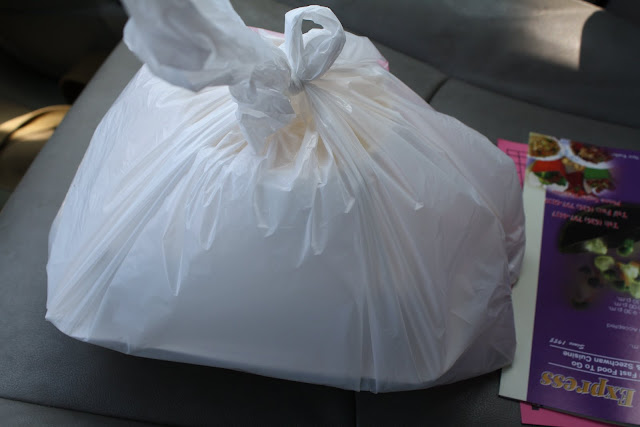 Only a few minutes later I received my order, a heavy bag tied up for me, and I took it to the car to eat. 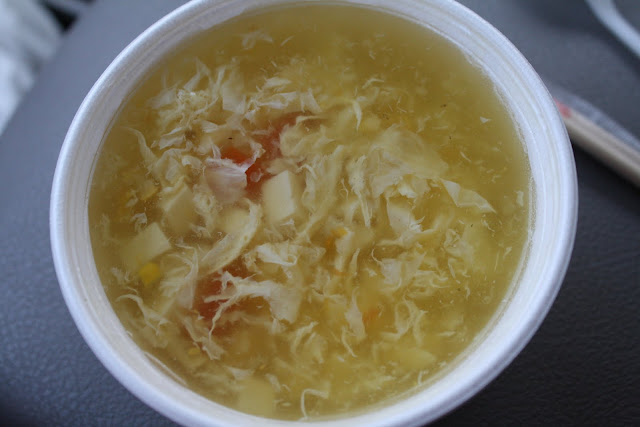 I started with the egg drop soup. I wasn't a big fan. I know egg drop doesn't have a lot going on and is often bland, but this was even more so than usual. 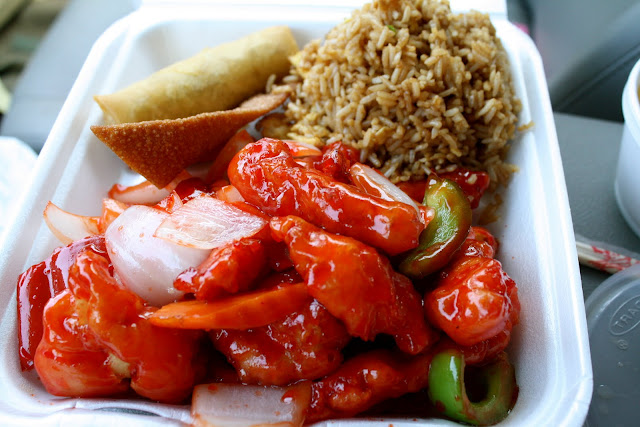 I was momentarily stunned when I opened the box; they give you a lot of food. I will say this again: I only paid $5.49 for all this. Of course, if it was as bland as the soup, maybe that wouldn't be such a good deal after all. 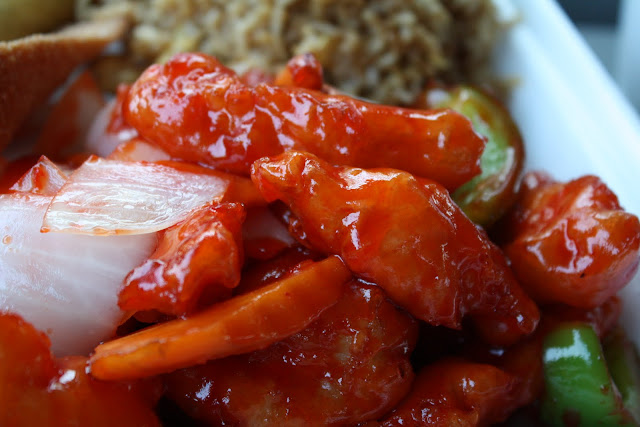 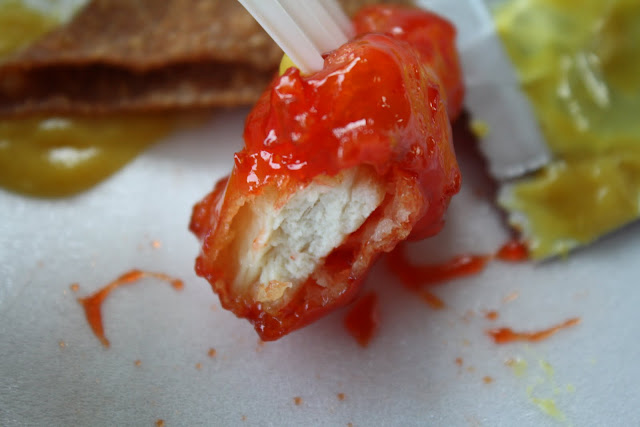 But, as it turns out, the chicken was great. It was crispy-battered, white meat chicken. Like almost all Americanized-Chinese sweet & sour chicken, the sauce was all sweet and no sour. But I knew going in that's how it would be so I'm not complaining. In addition to a generous amount of chicken, there were plenty of onions and bell peppers. 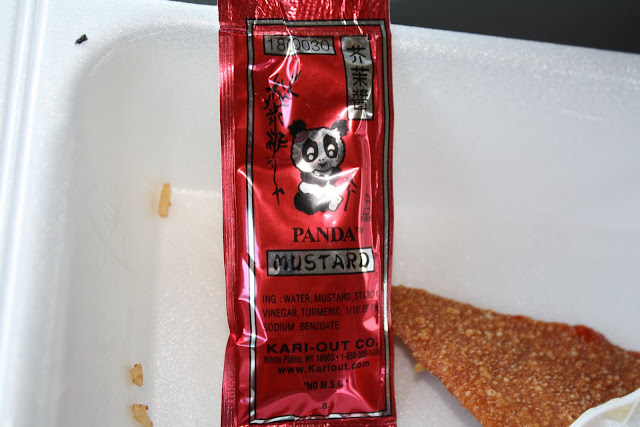 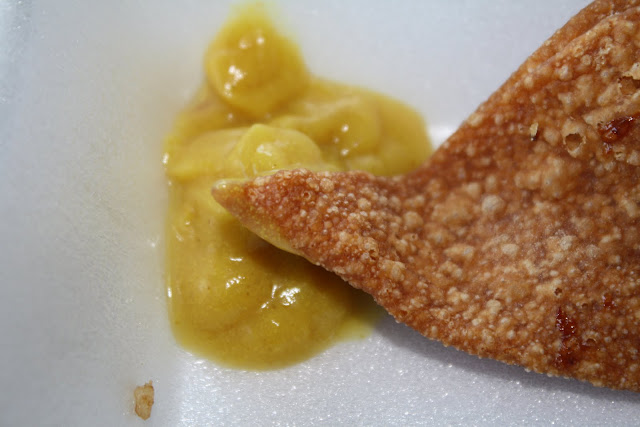 Hot mustard and fried wontons are one of my favorite combinations in life. 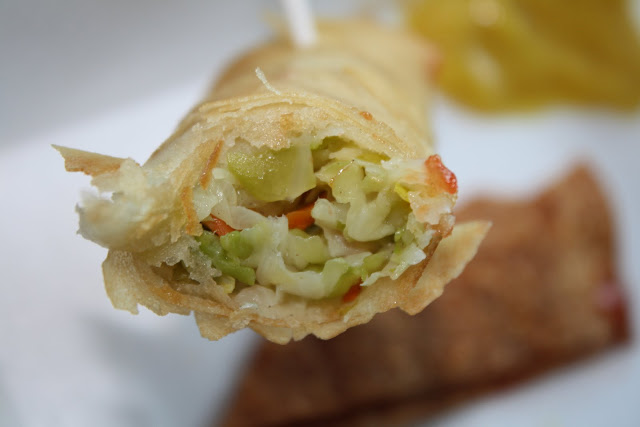 The egg roll was slightly disappointing: it tasted fine but it was only lukewarm. They certainly had not fried it to order. I kept thinking how much better it would be if it had been freshly made. 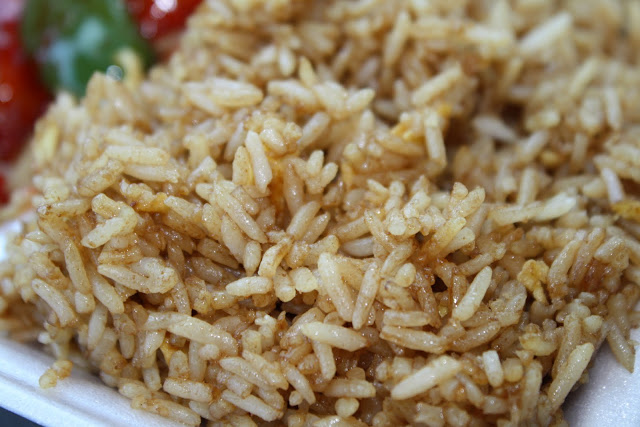 The fried rice was very disappointing. It lacked any flavor and was actually cold in the center. Not room temperature, cold. I ate two forkfuls of it and gave up. 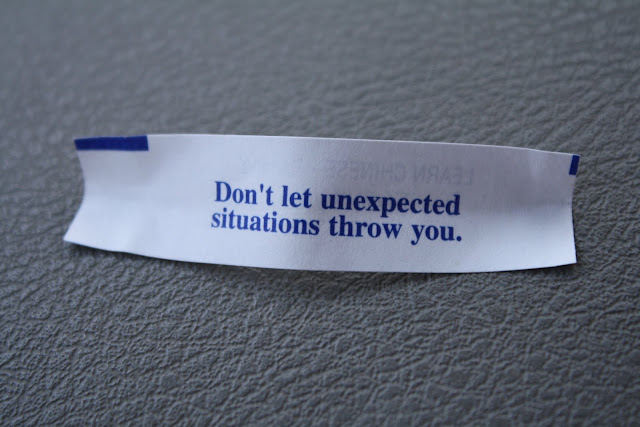 While China Express didn't blow me away, it was much better than I expected. The chicken was the only thing I really cared about, and it was by far the best part of the meal. And the price can't be beat. I texted a buddy of mine: "You know that run-down looking Chinese place on North Lake? I just ate there and it was really good."

He wrote back: "I used to get food from there all the time. I love that place!"

So I went back two days later. 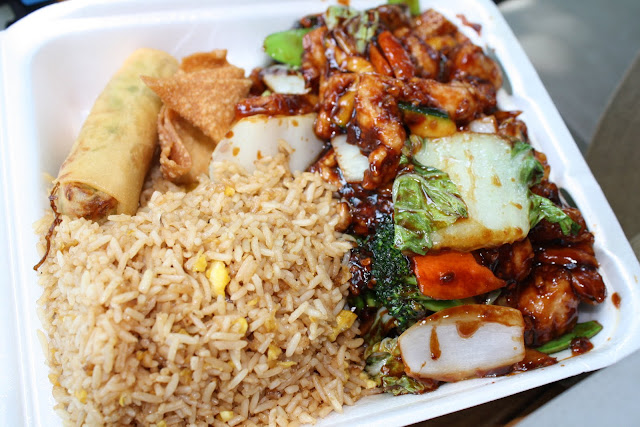 This time I ordered the garlic chicken. It, too, was only $5.49. Again it only took a few minutes and again I took it to my car. But unlike the previous time... 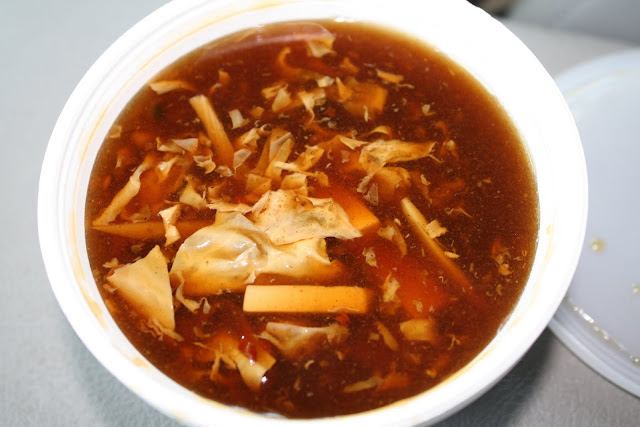 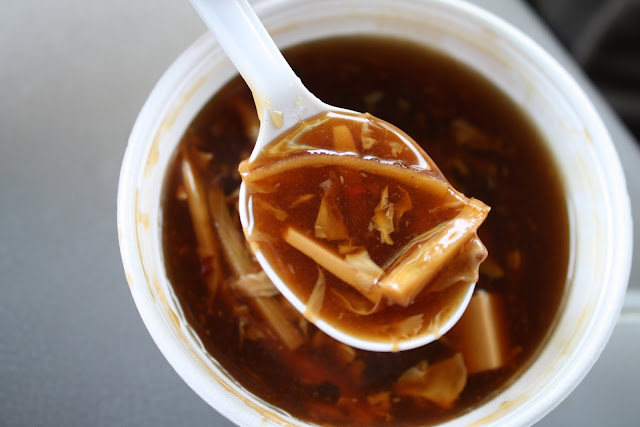 ... right before the woman handed me my food, she asked what kind of soup I would like.

"I didn't know I had a choice," I responded.

She told me I could choose egg drop or hot & sour. Without hesitation I chose the latter.

I've had enough Chinese lunch specials in this town to know that the hot & sour soup is not going to be hot. But this turned out to be a substantial exception. It was spicy. I loved it. Unlike the previous time when I ate no more than a few spoonfuls of soup, I ate at least half of it this time around, then turned my attention to the chicken. 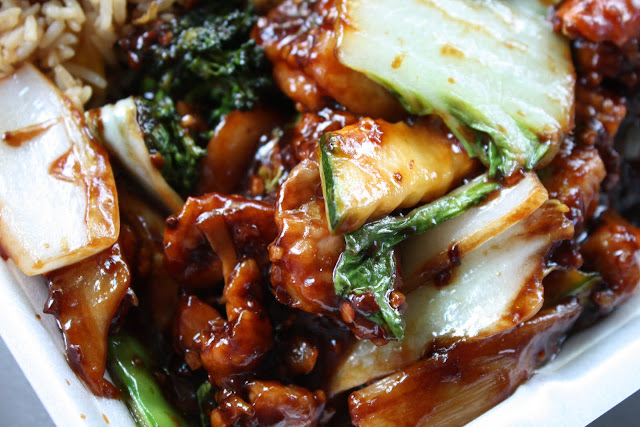 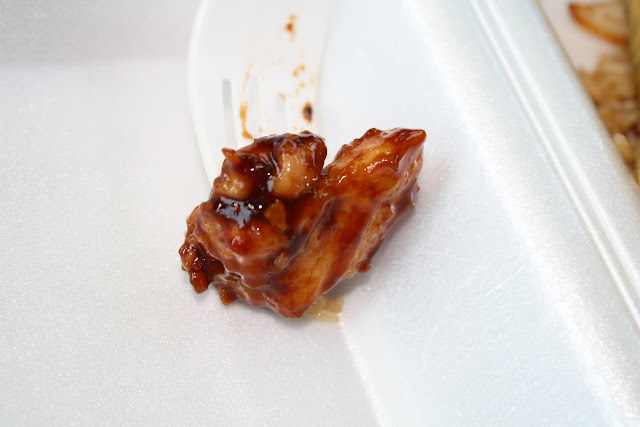 The chicken was again delicious; it was one of the best garlic chicken dishes I can ever remember having. The sauce had a definite garlic bite to it. The sauce wasn't too salty - which may be a first for me - and there was again a generous amount of both chicken and vegetables. 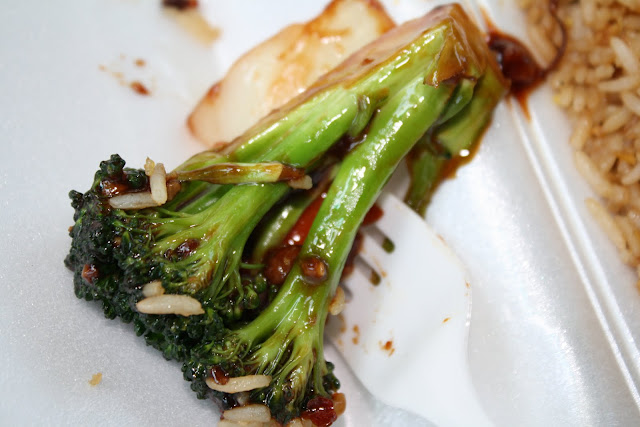 This time around, the dominant veggie was broccoli. That's just fine with me, it's one of my favorite. 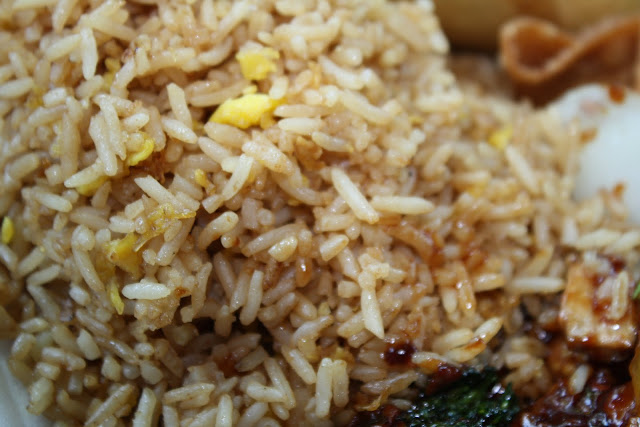 The fried rice wasn't cold, but it wasn't warm, either. Whatever, it's just rice. I don't care. 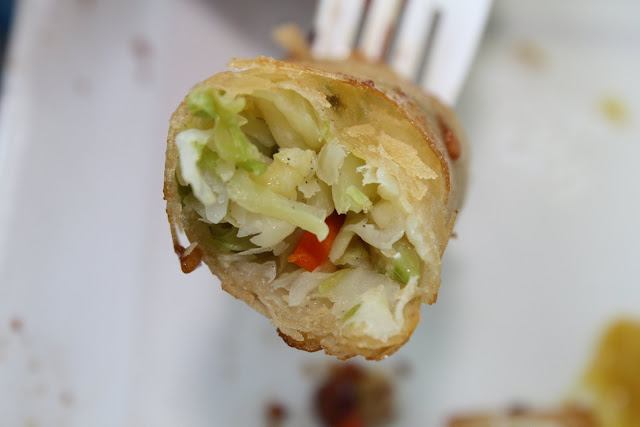 The egg roll was the opposite of my previous trip: it burned my mouth, it was so hot. I had thought the egg rolls would be delicious if they had just come out of the fryer. I was right.

My second trip to China Express was even better than my first. I told Elizabeth how much I liked it and she agreed to go there with me some day. Which may well be this weekend.
Posted by JustinM at 10:33 AM

I've been to this place often enough to have chiseled down my selections to these two favorites: wor wonton soup and kung pao chicken. I also love those spring rolls. The wor wonton soup is packed with fluffy shrimp, BBQ pork and really tasty filled wontons - a super-good comfort food. This weekend, you say?

If so, I will pick you up some Kung Pao chicken and we can eat it Sideways-style with a '61 Cheval Blanc.

That would be a terrible injustice. The chicken is THAT good.

From the outside I wooda said, "Now there's a place that looks like they make their fast food realy, really, really fast!"

But it sounds like you got your monies worth, haha.

Cafe: From the outside I thought it looked like a check-cashing outfit. Looks can be deceiving, I guess.

Anon: No kidding. The food isn't sitting out in steam trays. They make it fresh and they make it fast.

looks like a front for a money laundering business.

u know how sometimes u walk into a vietnamese joint and theres 1 table with 4 old asian dudes and the rest of the place is empty and the restaurant employees are like surprised you actually came in to eat? haha i love those places. but it always makes me wonder if something else is going on.

Funny, last weekend we were at a strip mall that had a couple of establishments very similar to what you describe. I mean, they looked like they might be lucky to do $50 in business throughout the day. Yet there was an armed guard.

I suggested there might be more going on there than meets the eye.

Love your review! I'm sure i've passed by this place dozens of times too...now i'll have to stop by! Man, I'm now craving Chinese food!!