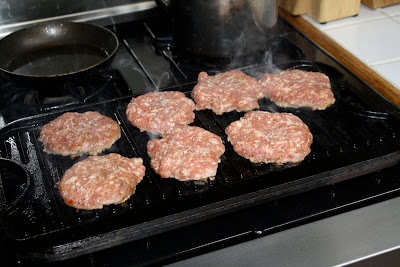 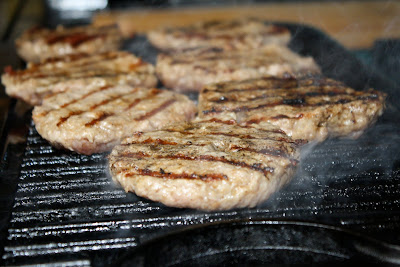 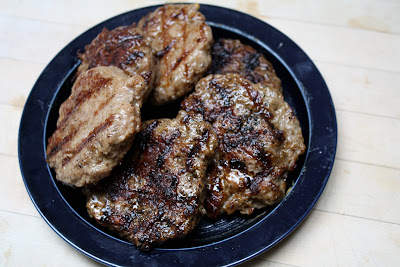 I had been at Taylor's Prime Meats to pick up the flat iron steaks, so I also got sausage and bacon for Sunday morning breakfast. Mr. Taylor himself helped me, and when I mentioned wanting the breakfast sausage, he smiled and said "This is so good."

"Do you grind this yourself?" I asked.

"Oh yes," he said. "If we were bigger we could put Farmer John out of business."

"It just kills me what they are able to get away with," he explained. "The amount of fat chunks in their breakfast sausage is terrible."

I bought just over two pounds of bulk sausage. In the morning I shaped them into patties and grilled them. The aroma was simply amazing.  I placed six of the seven patties on a plate for everyone to enjoy. For the seventh piece I had something else planned. 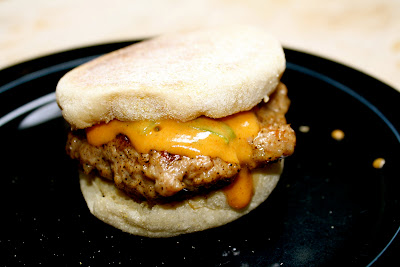 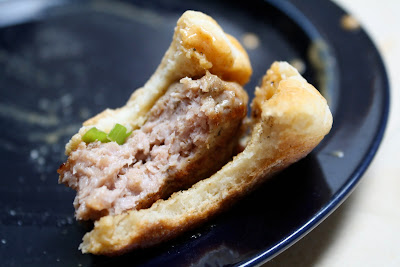 I placed it on an English muffin with a mustard/green onion/black pepper barbecue sauce. It was fantastic. The sausage was juicy and flavorful, and indeed there were no fat chunks in it. Not once did I have to pick a tough bit of fat from between my teeth. Mr. Taylor was correct, this sausage blows Farmer John's breakfast sausage out of the water.
Posted by JustinM at 12:50 PM

When I was a kid, I ate at a Bob Evans restaurant somewhere in the midwest and had a sausage patty on a bun. It was life-changing, or at least as life-changing as breakfast can be for a 10 year old.

I didn't have any sausage, but the bacon was delicious.