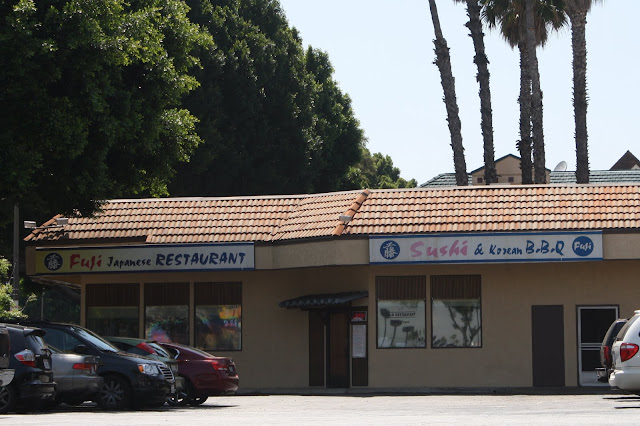 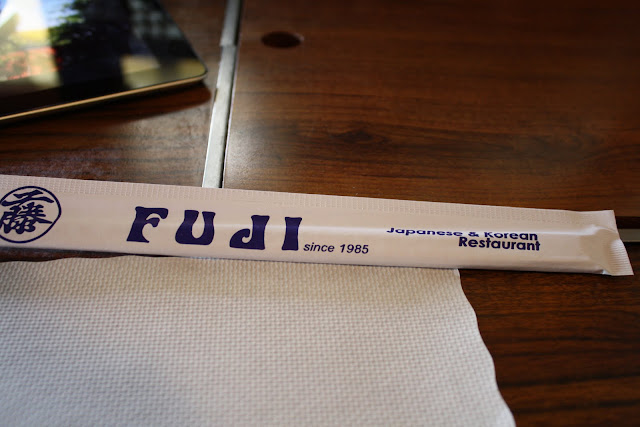 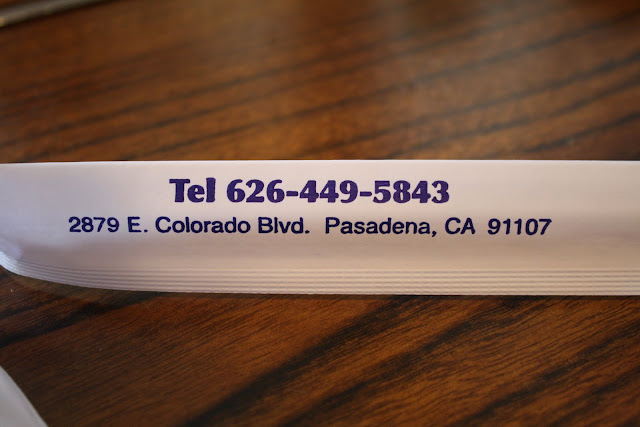 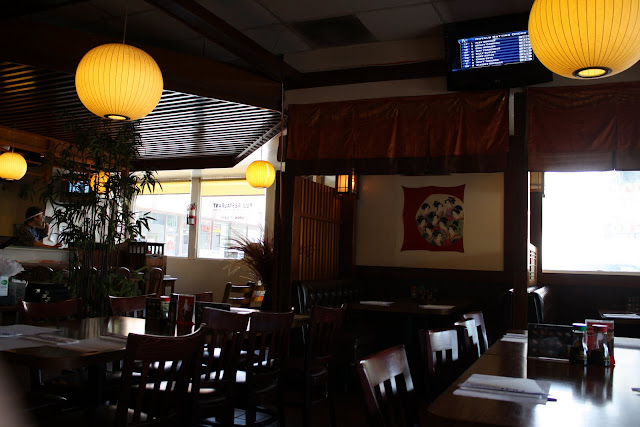 The other day I took forty years of Road & Track magazine out to Riverside to donate them to the Riverside International Automotive Museum. I had to load and unload all the boxes myself, and the whole excursion took several hours, although, to be honest, I spent a fair amount of time gazing longingly at the collection of cars, particularly the 1970 McLaren F1 they had for sale (for $250,000).

So I was ready for lunch by the time I got back to the Pasadena area. As luck would have it, my mom called me and said my brother was stopping over by my parents' house, and she asked if I would like to go to lunch with them. I said of course.

My brother and I went through our usual routine when trying to decide where to eat, he listing as many obscure places - most of them Thai - as he could think of. I wanted barbecue. But I agreed to get Asian food as long as we could try someplace I'd never been before (so I could have a new place to write about). We settled on Fuji Japanese Restaurant, a place neither of us had ever heard of.

It's on Colorado Blvd, not far from Target, in a strip mall I have driven by perhaps thousands of times in my life without ever bothering to pay attention to the shops. (Fuji's chopsticks wrappers say they have been open since 1985.) There was only one other table occupied in the place, but it smelled great inside. 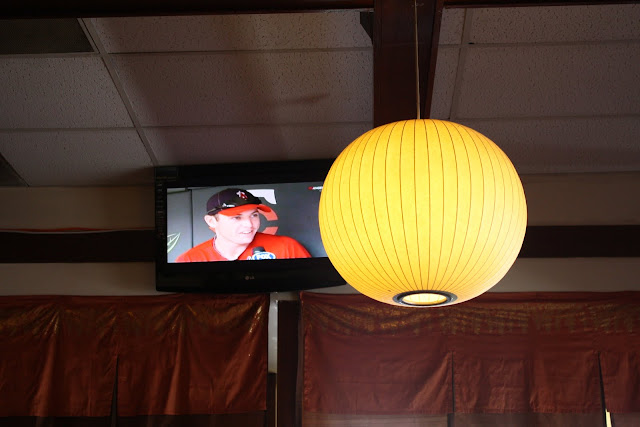 An Angels day game on the TV in the middle of the day in a Japanese restaurant? All good things. 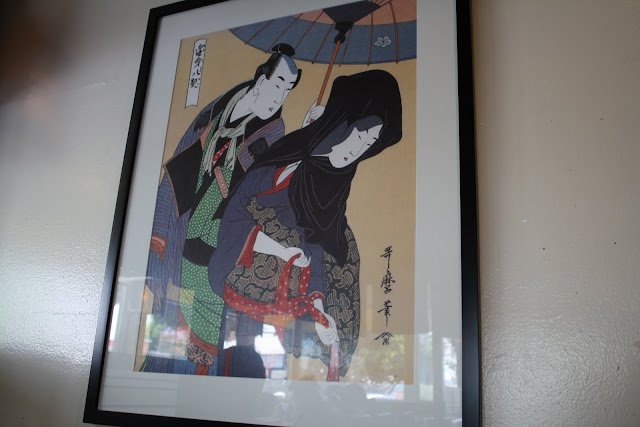 A sent a picture message to Elizabeth: "They're like a Japanese version of us!" 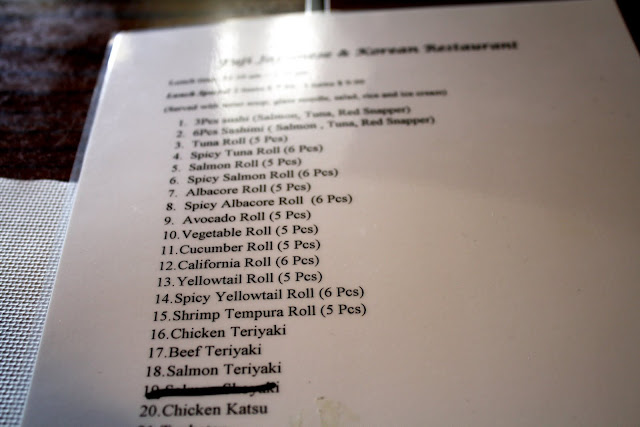 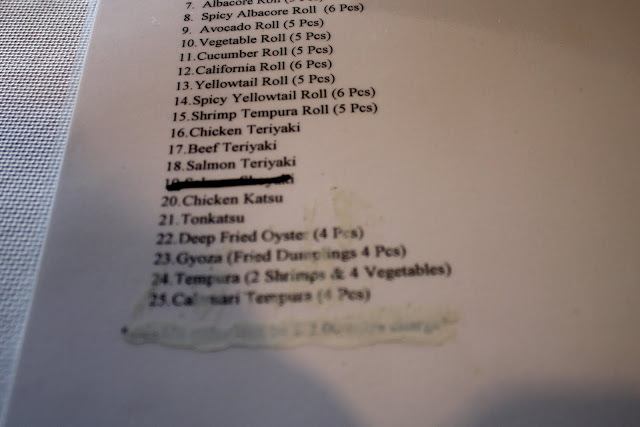 The waitress placed sloppy, typed lunch menus in front of us: choose two entrees for $7.99 or three for $9.99. All lunch specials include miso soup, a small salad, and noodles. 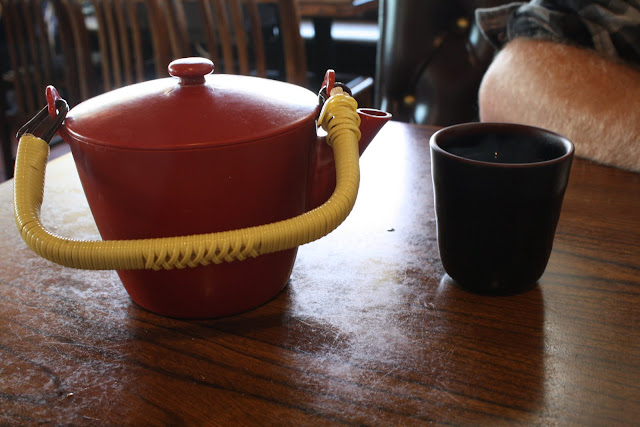 The tea was tasty but nothing special. 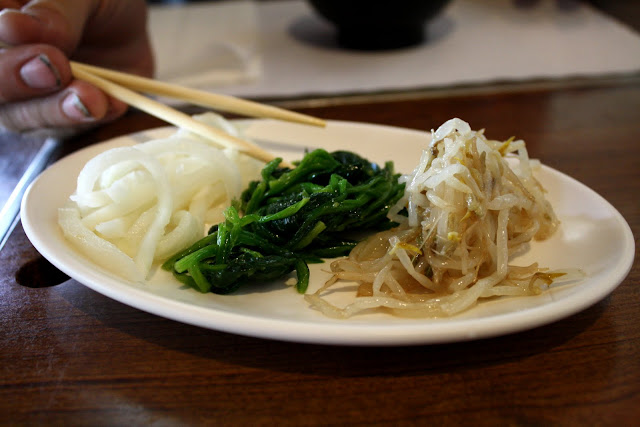 My brother introduced me to pickled daikon. I've never had it before but now I think I might love it. 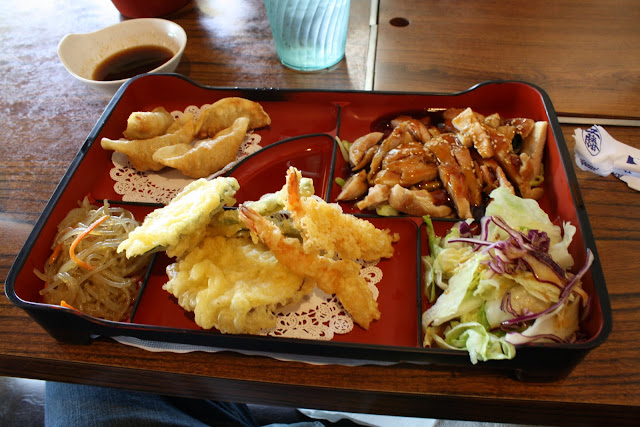 I ordered myself a three-entree lunch special: gyoza, tempura, and chicken teriyaki. 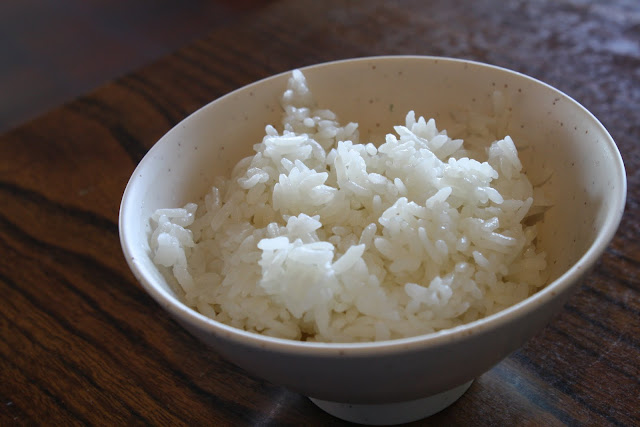 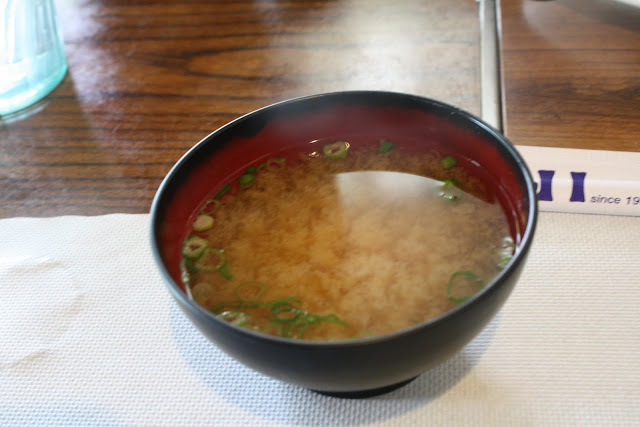 The miso soup was outstanding. 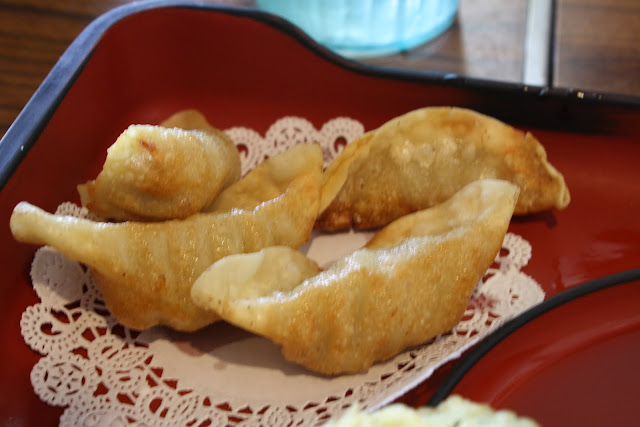 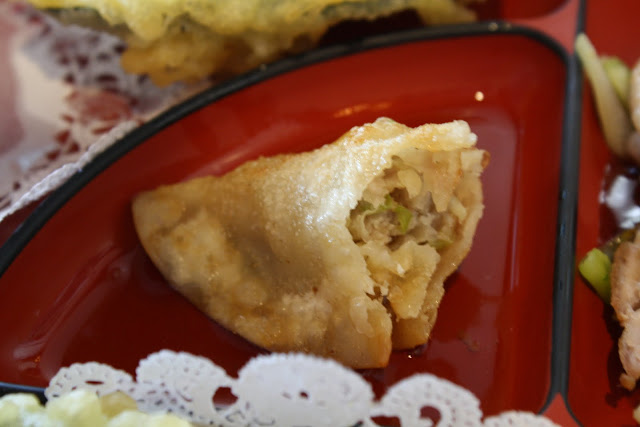 The gyoza were pretty good - they were crispy and the accompanying sauce was delicious. The insides didn't have a whole lot of flavor, but it was better than average. 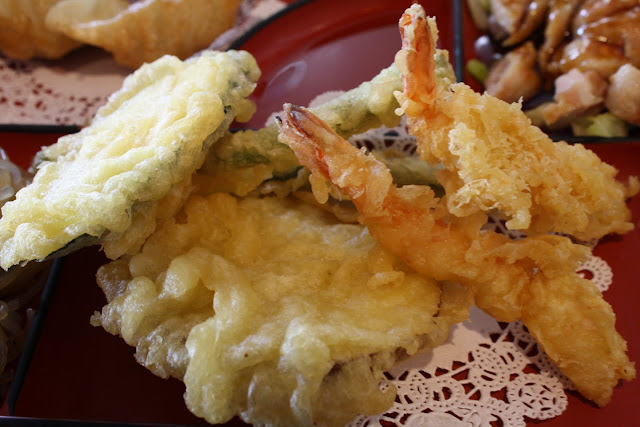 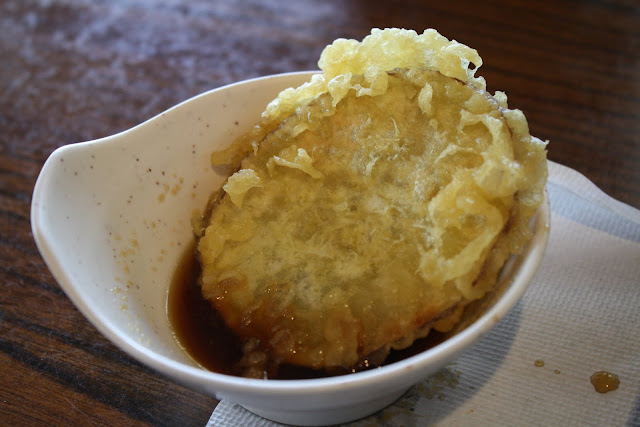 The tempura was outstanding, some of the best I have ever had. The batter was as crisp as a cracker and the veggies were perfect. If you've ever had a piece of tempura where the vegetable - say, zucchini - was nothing but a slushy mess, you know that can be disappointing. These were cooked but still slightly firm and I could have eaten twice this amount. Three or four times, probably. 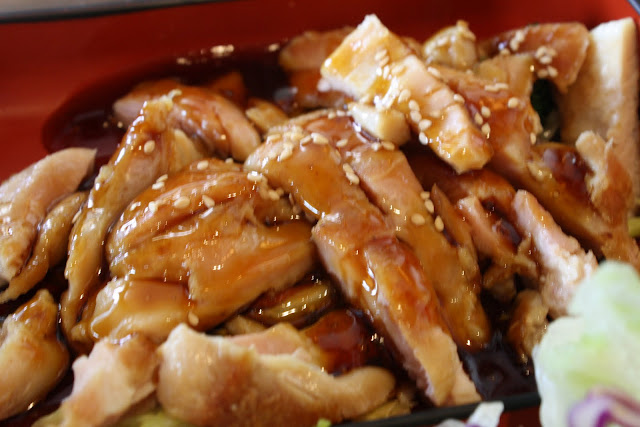 I have no explanation for why I ordered chicken teriyaki. I don't even like chicken teriyaki. I guess when I was ordering my combo, I quickly asked for the gyoza and tempura and then stalled, trying to think of something else to get. And I saw chicken teriyaki and just blurted that out. I know I hide it well, but most of the time I am a complete moron.

The reason I told you that is so you will take these next words with a grain of salt: the chicken teriyaki was absolutely horrible. The chicken was fatty and rubbery and the sauce was a disgusting blend of sweet and salty. I dunked it in the gyoza sauce, hoping to wash away some of the nasty flavors, but it didn't really work. I tried valiantly to eat it all, but I just couldn't.

My mom had decided to stay at home and have us bring food back for her. I got her the gyoza/tempura as well, but with beef teriyaki. And she said the same things about the beef version that I did about the chicken, that it was pretty bad. (My camera battery died at the restaurant so I whipped out my backup point-and-shoot - and yes I realize how dorky that makes me sound that I have a backup camera - and took photos of her food back at the house. But I can't find that camera this morning, so I can't include those pics. Sorry.) 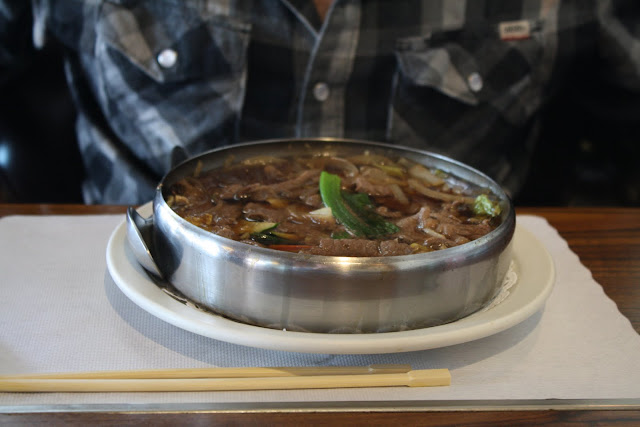 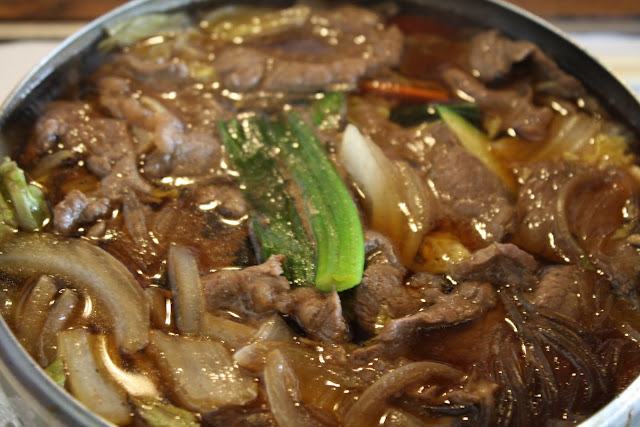 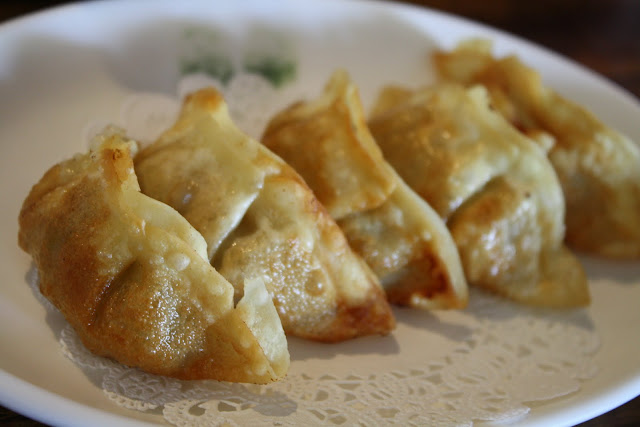 My brother went a slightly different route: he ordered sukiyki and a plate of gyoza. He said they were both fine, though neither were memorable.

I think that was how we both felt about the place overall: fine, but nothing special. While I certainly would not mind returning to Fuji, I don't know as if I ever will. As I have written many times, there are just too many places in the San Gabriel Valley to explore for me to return to a place that I thought was merely average.
Posted by JustinM at 10:54 AM

What were you doing with all those mags?! That was nice of you to donate. Agreed on the meh Japanese dinning experience here.

Ditto on the magazines...your dad's collection?

I've always wondered about this place as well. Not so much for the Japanese food, but because it says Korean BBQ. What did the rest of the menu look like?

Anna: The collection belonged to my dad, but he just didn't want them taking up so much space any more. I wanted to go to Vegas with him and try to get on Pawn Stars but he wanted to give them to the museum, which he had a professional relationship with years ago.

Bryce: No, the magazines were all mine.

The menu was mostly sushi but the emptiness of the place made me wonder how fresh the sushi might be. There are grills on several of the tables for BBQ, but I decided just to go for the lunch special.

Can you please share with us your brother's secret technique to getting his nails to look like they do in the chopsticks/pickled-daikon picture? Thanks in advance.