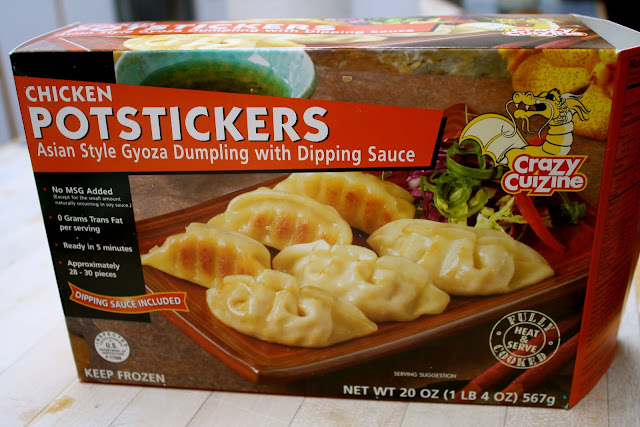 I've written before that my parents are very laid-back when it comes to celebrating holidays and things like Mothers Day and Fathers Day. So when I suggested that we celebrate Fathers Day on Saturday night instead of Sunday, and I cook dinner, that was just fine with everyone. My parents had been at a memorial service Saturday afternoon, and when they returned, my dad was starving. I honestly do not remember ever seeing him look so hungry.

The night before I had been at Ralph's, and, in addition to the P.F. Chang's frozen meal, I bought a large box of potstickers - as a backup in case the meal had been inedible. But I had eaten the General Chang's Chicken and I thought Cool, I still have a big box of potstickers. There were 25-30 in the box and I thought I could get at least two or three meals out of it in the future, or maybe 5 or 6 snacks.

But I offered to cook some for my dad - and my mom and brother wanted some, too. So I ended up cooking half the box. I pan fried them for two minutes and then added a bit of water, covering the pan and letting the dumplings steam. Then I topped them with diced green onion from the farmers market. 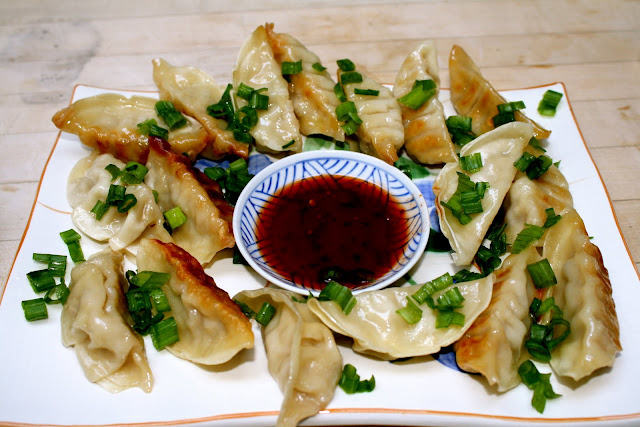 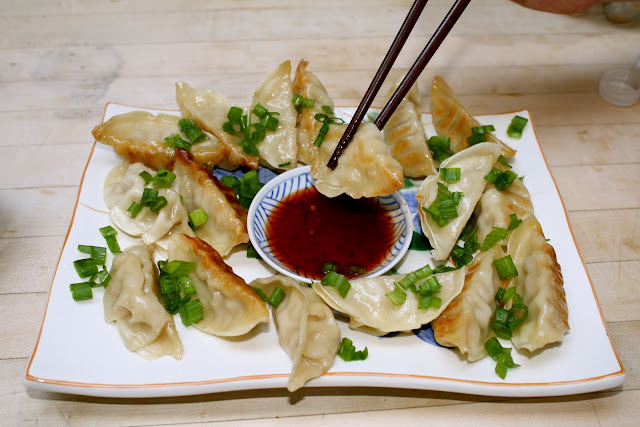 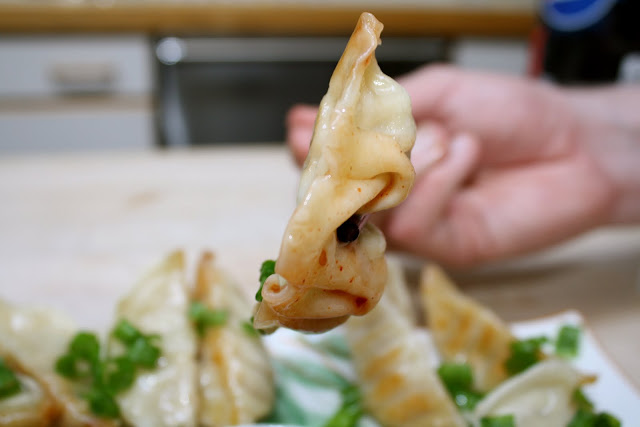 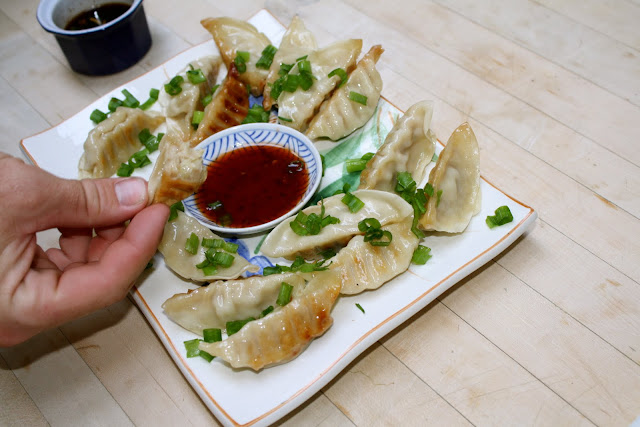 Everyone liked them so much that when I asked if I should cook more there was a chorus of "Yes!" and I ended up cooking all the rest. They will never be confused with the potstickers from Luscious Dumplings, but for what they are, they were very good. The big box cost about 8 bucks and we all got plenty of appetizers. 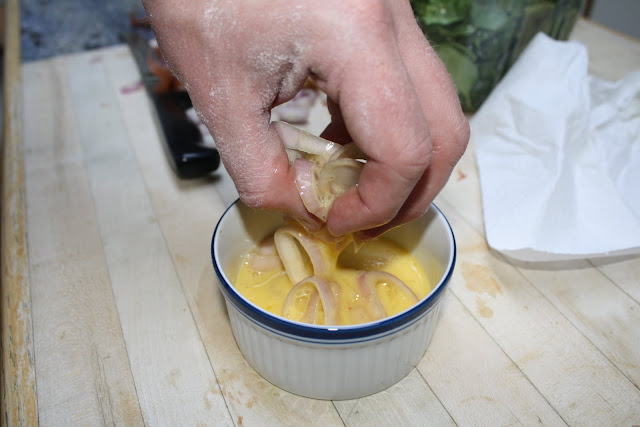 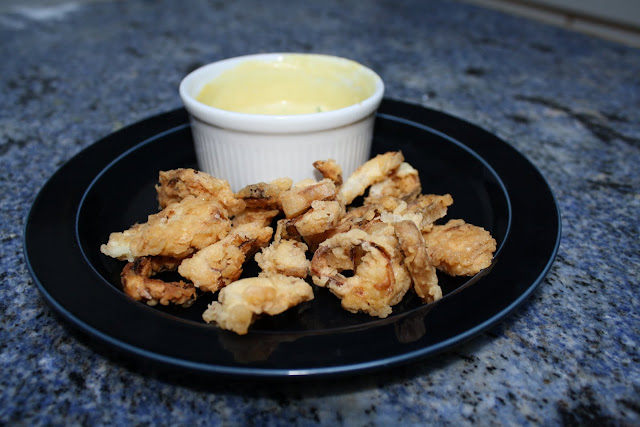 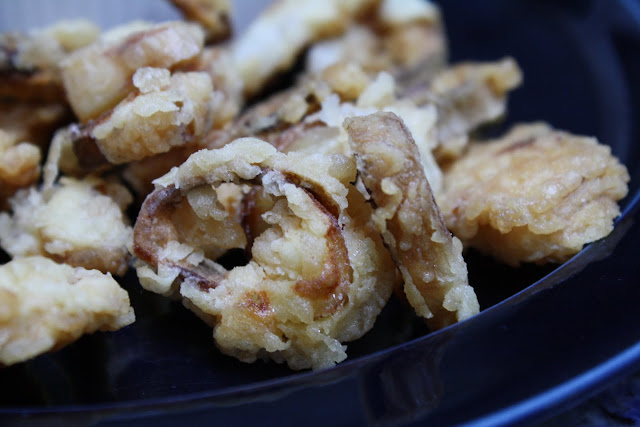 For some reason there were lots of shallots at my parents'. I'm not sure I've ever seen more shallots in one place, other than at a market. My mind raced back to a dinner at Quadrupel in Old Town where Elizabeth, Carla and I had fried shallots as an appetizer. Why not make some? I sliced up two shallots, dipped them in egg, dredged them in flour and fried them in a pan for just a few minutes.

Everyone enjoyed them - although I really should have seasoned the flour more. It was a decent snack, but nothing too special. My brother and I turned our attention to making dinner. 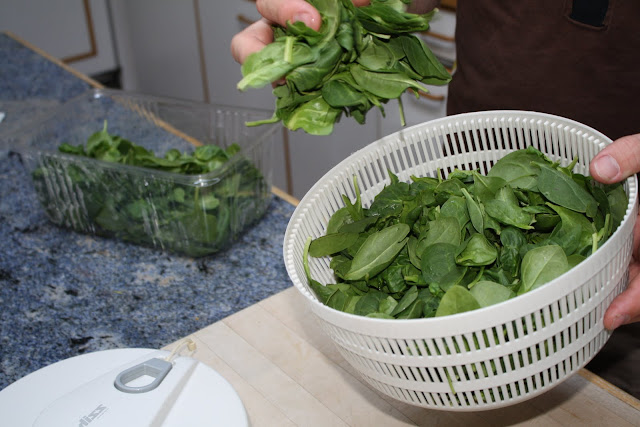 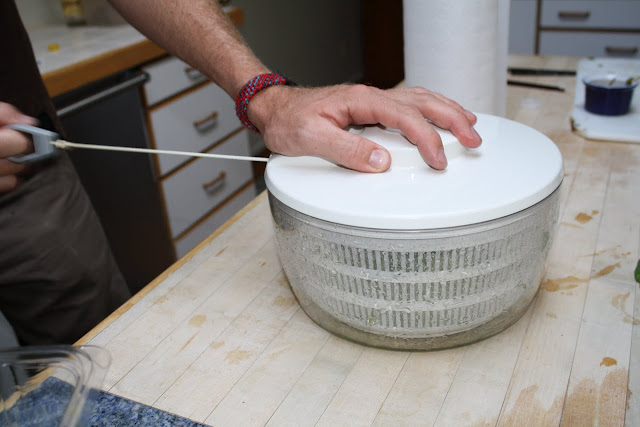 My brother put spinach in the salad spinner and gave a whirl. 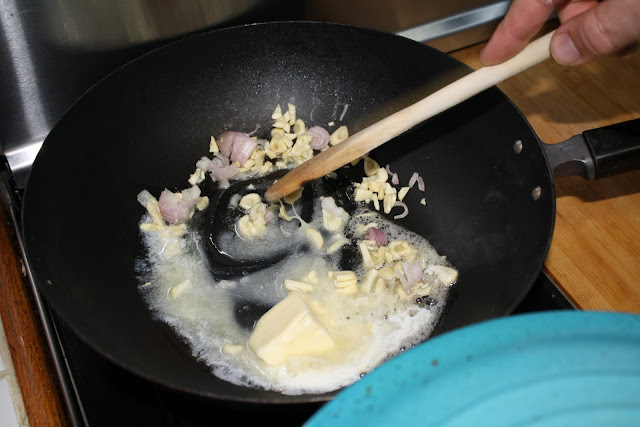 My brother sauteed garlic and shallots in butter in the wok. 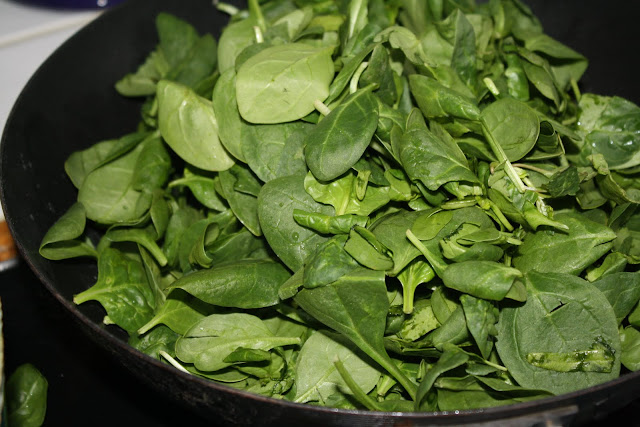 Then we added spinach. 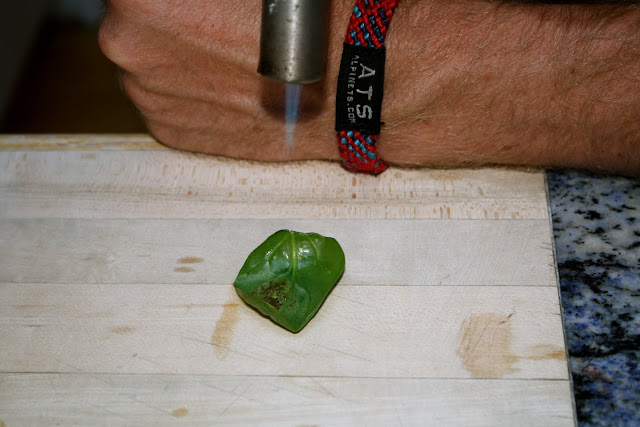 "Take a picture of me with the kitchen torch," my brother said.

"Burning a piece of spinach."

"We might be taking this whole action shots thing a little far." 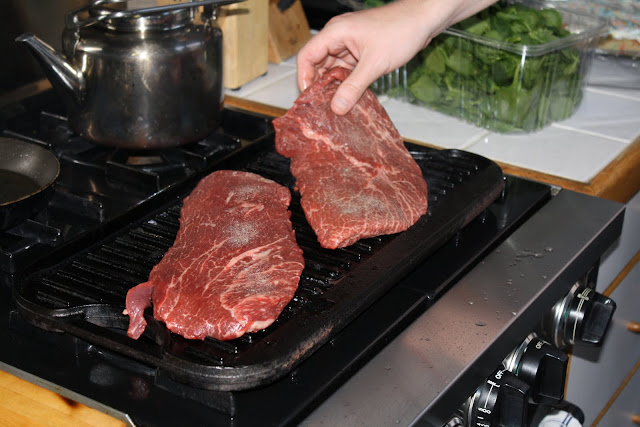 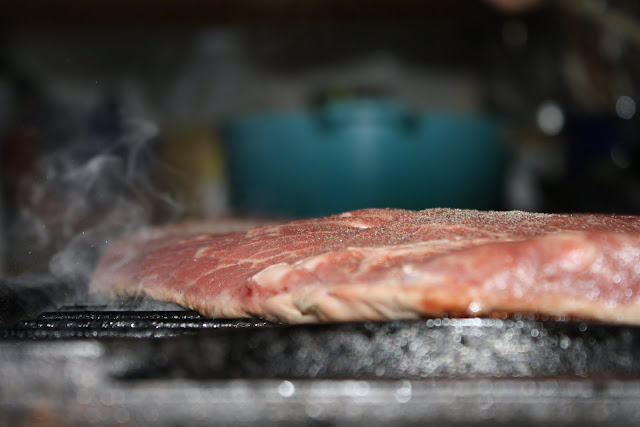 My brother took this shot and immediately proclaimed it "The One." 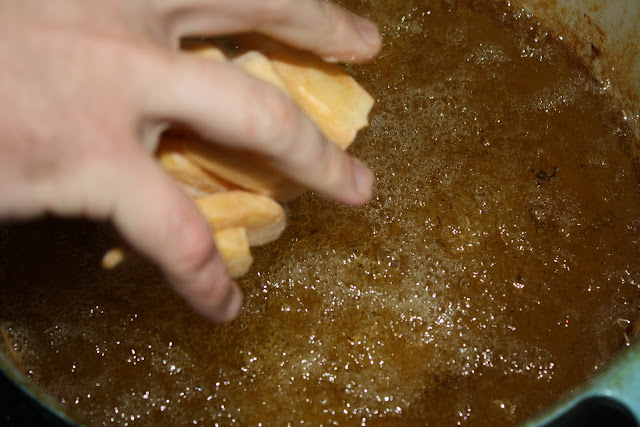 This is me dropping the third batch of steak fries into the oil. 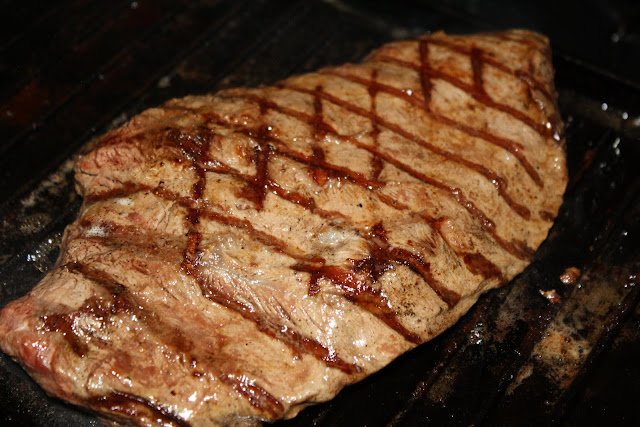 I guess I didn't need to go for the diamond pattern on the steaks, but I did anyway. 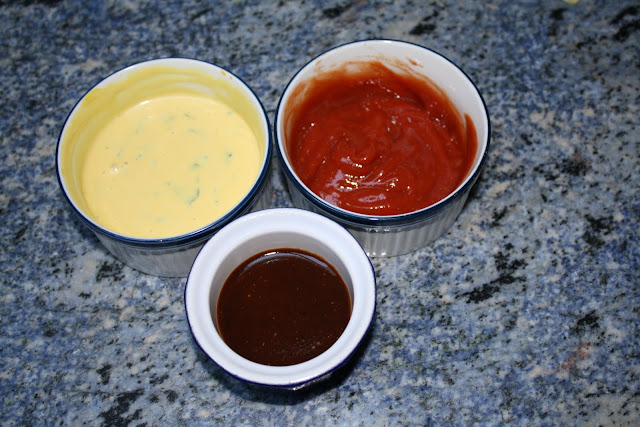 I put together two sauces for the fries: honey mustard (mayo, mustard, honey, green onion) and cumin ketchup. The bottom container is just steak sauce, though, as usual, the steak did not require any condiments. 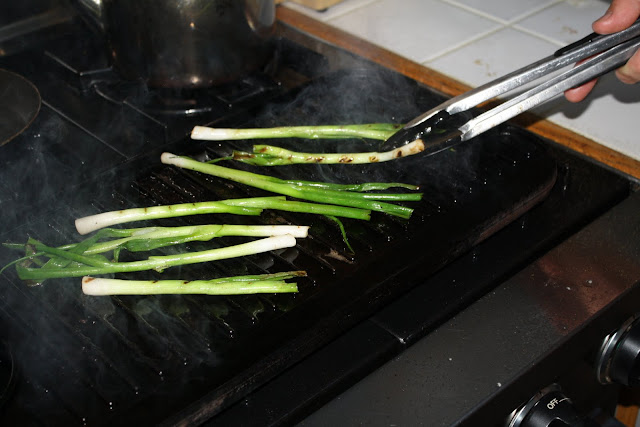 My brother wanted to grill some of the green onions I'd bought that morning. I don't know why, but hey, he's my brother, so I let him. 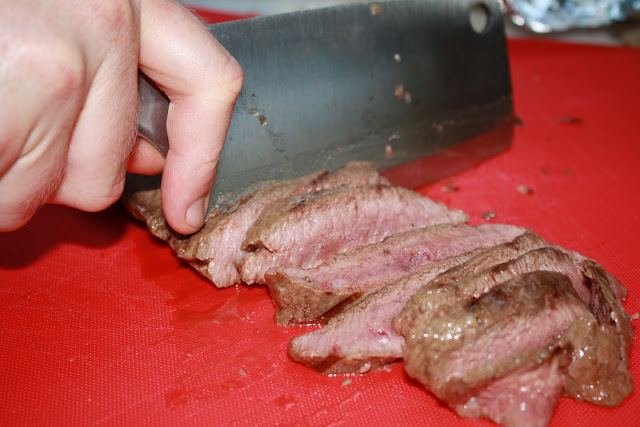 This is me slicing one of the steaks. 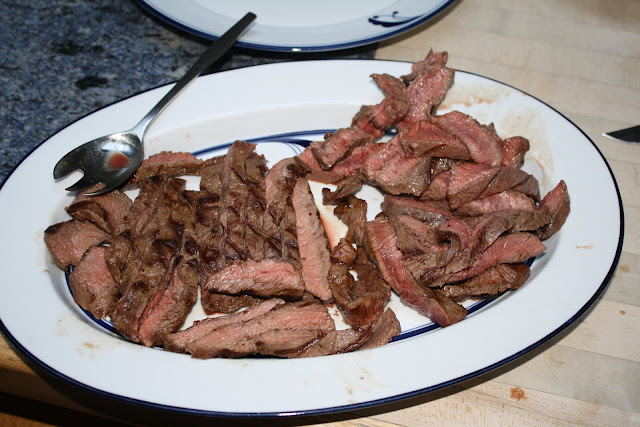 On the left are the medium steaks, for Elizabeth and my dad. On the right are the pieces for me and my mom, some medium-rare, some still kind of rare in the middle. It's Prime steak: if it's rare, I'm okay with that. I'm not sure how my brother likes his steak cooked at this point; his diet seems to change every year. 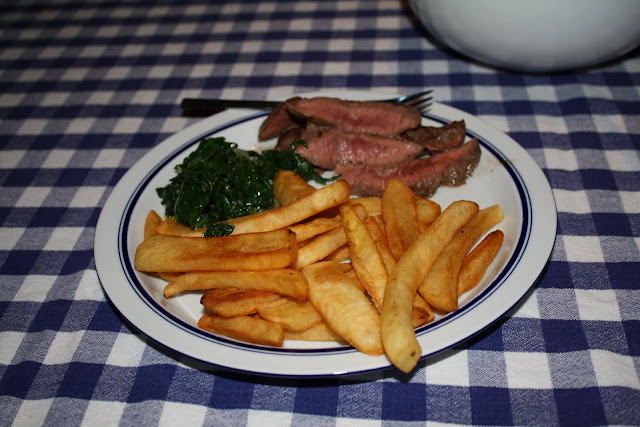 your brother's like the early 2000s nick van exel of action shots. when he was a nugget. and i mean that in a good way!

that leaf of spinach didnt stand a chance against the might kitchen torch! bwahahahahaha

There has never been an ESPN.com article I loved more than the one demolishing the myth about Kobe's clutchness.

Kobe has never been great in the clutch, he has had some absolutely hideous big games, and he saved the worst game of his career for the biggest - game 7 last year against Boston. But still these clowns mimic each other, proclaiming him the "best clutch player in the NBA," remembering all the shots he's made and forgetting all the ones he's missed.

Back to my point, the reason I love this article so much is that allows me to point out that even NICK FREAKING VAN EXEL was more clutch than Kobe.

What kind of oil do you fry everything in?

This was a really GOOD dinner!

i used 2 have a salad spinner exactly like the one you have pictured.

Liz: I'm glad you liked it!

Cafe: The funny thing is, the spinach was already triple washed... but my brother wanted to get the action shot in, you know?