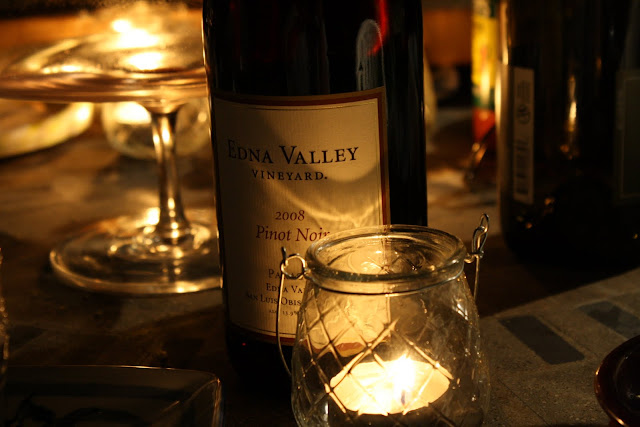 Some friends came over for dinner last and it was a fantastic time. As much as I love trying the newest product at fried chicken joints, there is no comparison to a relaxing dinner with friends on a nice evening. I thought I'd give you a rundown: 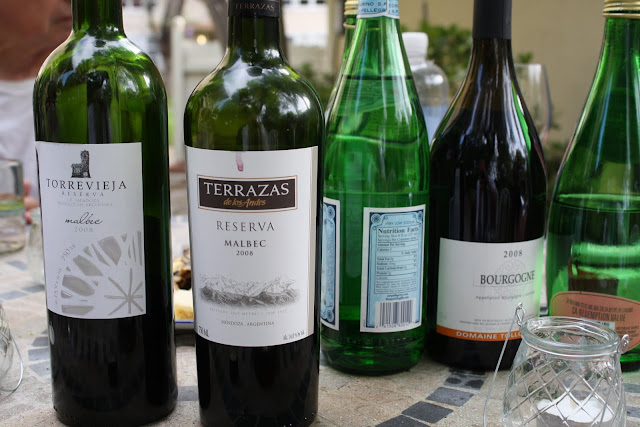 After last Thursday's pizza/wine adventure that ended with eight empty bottles of wine, I was not surprised to see several bottles of water appear on the table this time around. 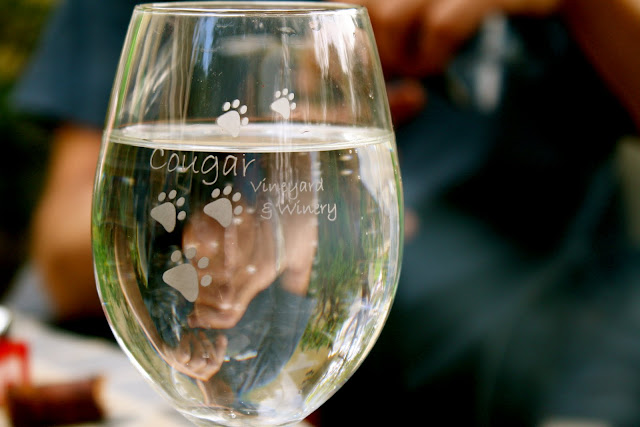 Tracie and her Cougar glass, filled with Perrier. All is right with the world. 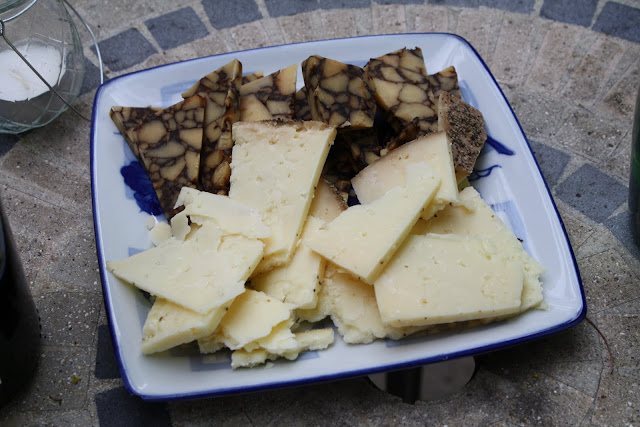 We snacked on two kinds of cheese to start: Irish cheddar with porter and Toscano with cracked black pepper. 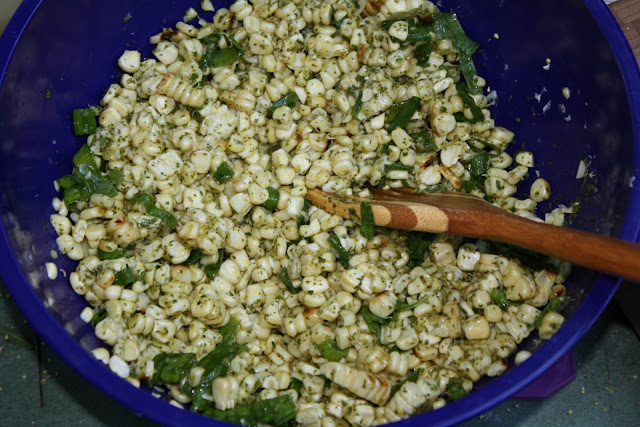 I grilled several ears of corn and made a corn salad with roasted jalapeno (I burned it directly on the flame, peeled it and diced it), lime juice, cilantro, olive oil and green onion. Sometimes I add two jalapenos, because I love it spicy, but when I'm serving it to guests I don't go too crazy. 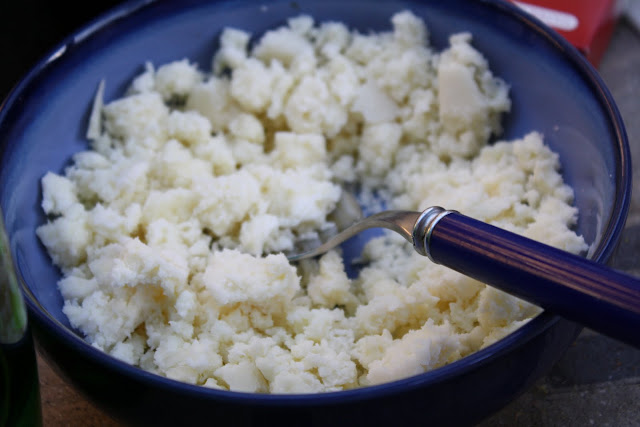 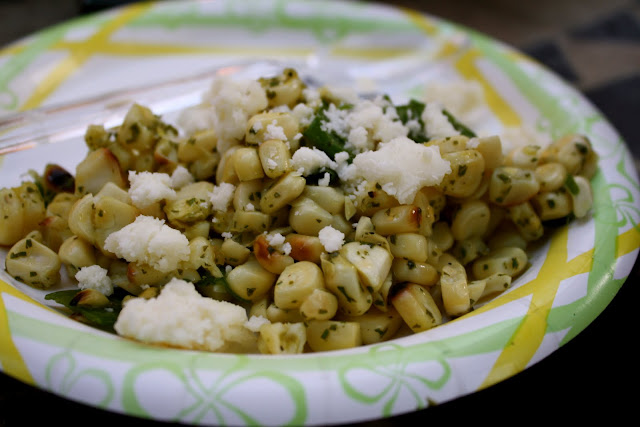 I like to serve it with a bowl of cotija cheese, a crumbly, cow's milk cheese from Mexico, very similar in texture to feta. 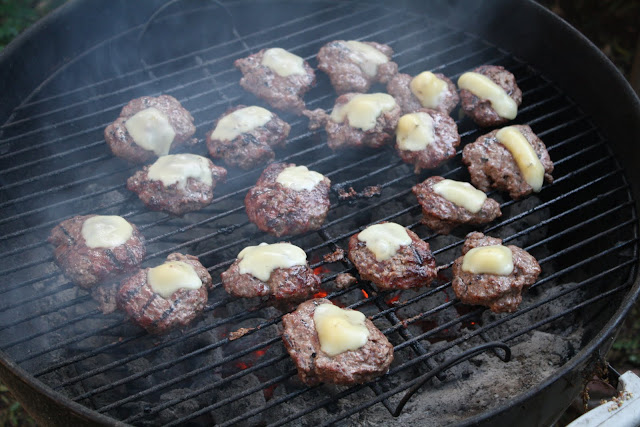 I formed ground beef into small patties and grilled them, topping them with a hot pepper jack cheese. Why the spicy cheese, you may ask? I'll tell you: 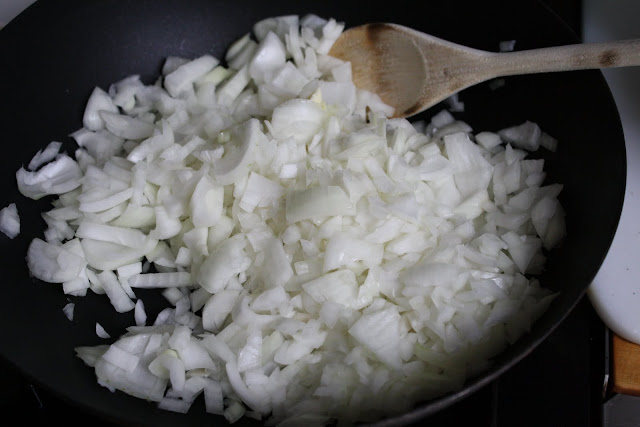 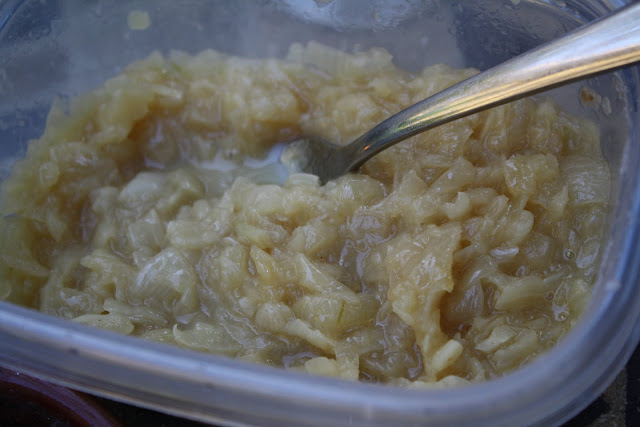 Vidalia onions are in season now. You can eat them raw and they are sweet; when you caramelize them, as I did earlier in the afternoon, they turn into a paste sweeter than candy. People sometimes ask me for things to add their cooking repertoire. I ask if they ever use Vidalia onions. Anything cooked on the grill that calls for onions can be made just a little bit better if you substitute Vidalia. (A bag of 5 at Trader Joe's costs two and a half bucks.) 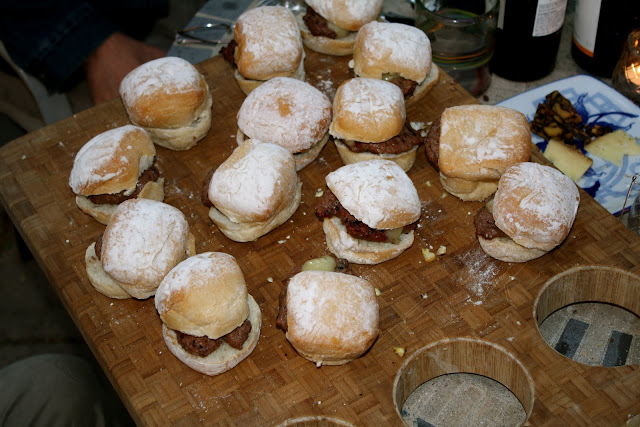 On this occasion, the buns I chose to use were from Bristol Farms: small potato rolls, soft as cotton candy, dusted with potato flour. 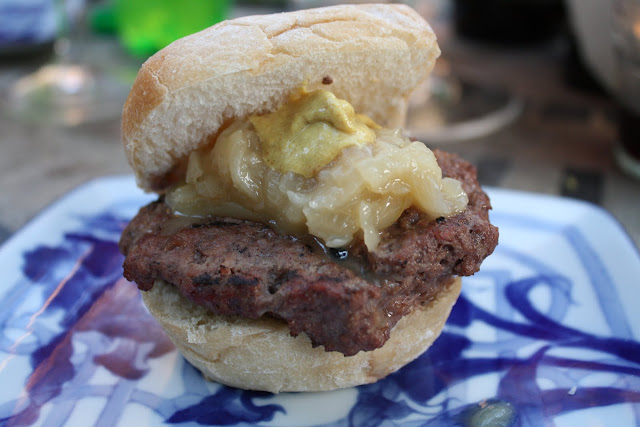 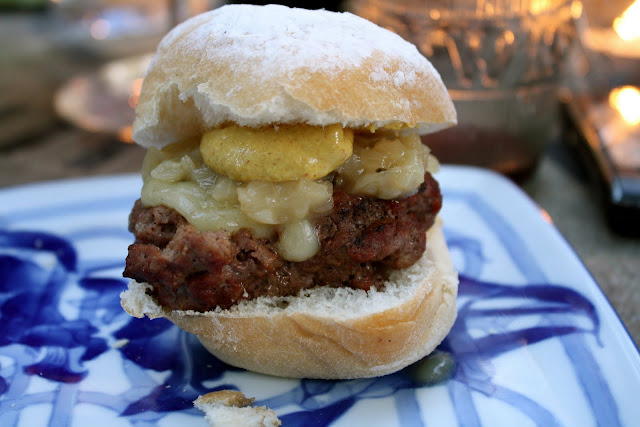 I topped my sliders with the onions and a healthy dollop of garlic mustard aioli. 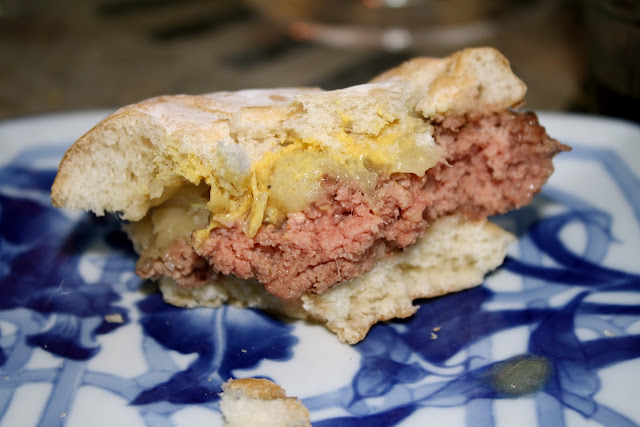 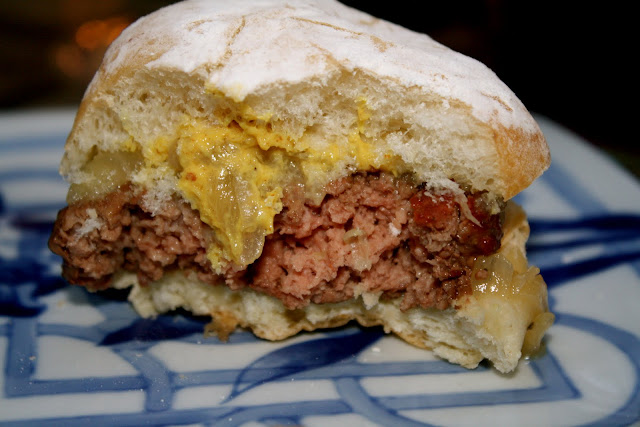 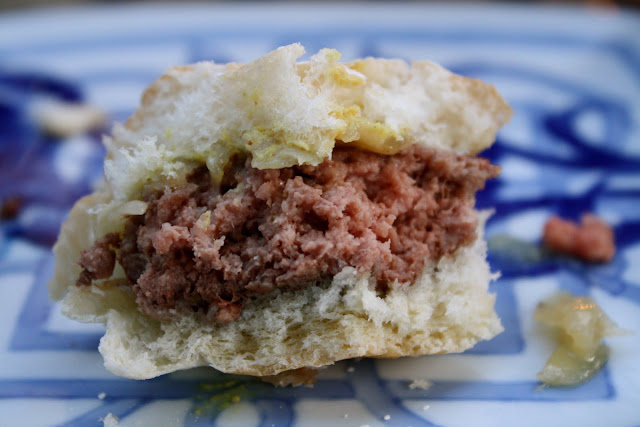 They were amazing. The meat was juicy and slightly charred, the onions and pepper cheese were a nice juxtaposition of flavors, and the buns held it all together beautifully.

It has been years since I have received so many compliments for a dinner.

"This is unbelievable," Tim said. "We couldn't go to any restaurant in town and have a meal this good." Later in the evening he sent me a text message thanking me and he called it the best meal he has had all year.

Murph was even more effusive in his praise: "You have cooked me between forty and fifty meals over the last seven years, and this is the best. The sliders are just perfect." 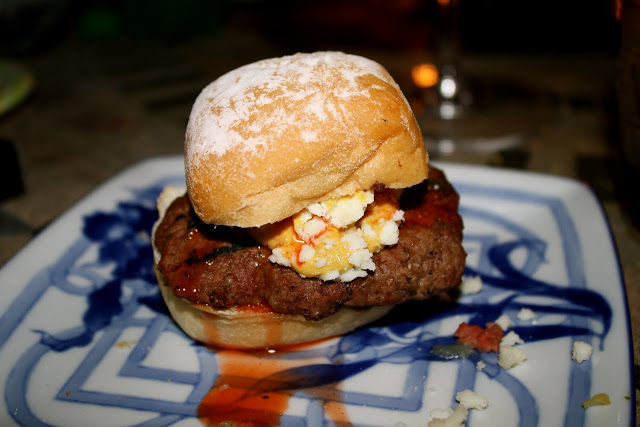 After a few glasses of wine, I went for a third slider, but decided to make it spicy: I added cotija cheese, mustard, and several slugs of Trappey's hot sauce. At the time I thought it was outstanding. Looking at it now, I realize I may have just been a bit tipsy; there was no way it was better than the previous sliders. 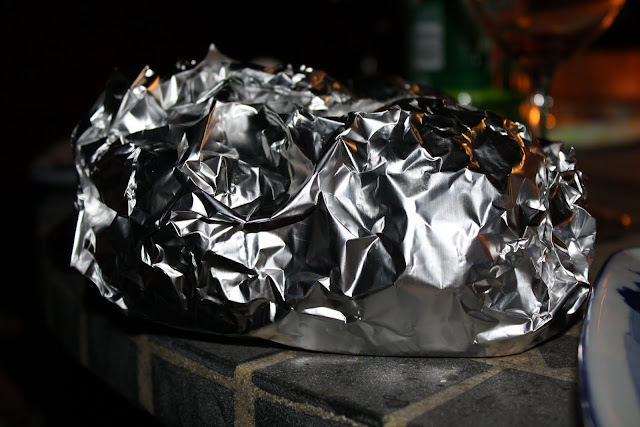 There were three sliders left over so I wrapped them up for Murph so he could take them to work with him today. He works downtown and his office always has good food available - hell, sometimes they have Pie 'n Burger cater their lunch - so the fact that he wanted to eat these made me happy. 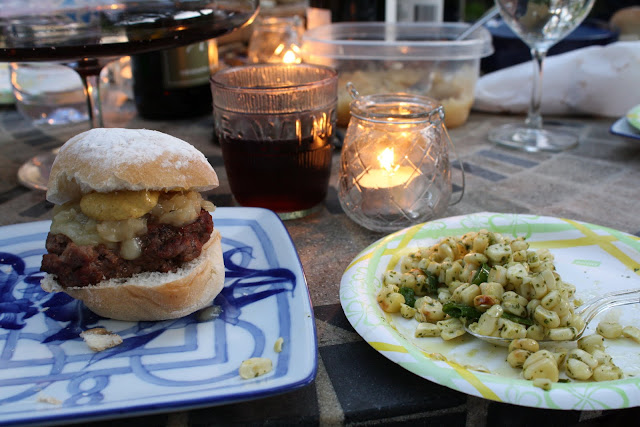 I will close with this photo, which might be my favorite from the evening. I run into old friends in Pasadena on the street or at parties these days and they say things to me like "You don't really go out that much anymore, do you?" And I go into the reasons I have: that most of the restaurants I have liked over the years in Old Town have closed and most of the time I would rather just cook for myself, that I love my patio more than any bar in town, that I live with my best friend and two other great friends live less than 100 yards away. From now on I can just show people this photo; it makes all three points at once.
Posted by JustinM at 12:41 PM

Wow is all I have/am able to say.

Making that salad. Feel like it might be my summer obsession. And ditto the wow from above.

This fine post made me think of a mustard concoction you might like. Over the years, I have made a number of mustard's from scratch, but have never really been that impressed with any of them. I did stumble across this very simple mixture (I hesitate to call it a mustard recipe as it starts with pre-made mustard) which I thought turned out rather well.

The instructions state to let it rest for at least 4 hours, but it really needs to be overnight as I have found that there is a big difference. Also, if you do this, extra hot horseradish is key, probably the fresher the better. Like you, I am not a huge fan of regular Tabasco. I typically use Crystal, or Red Rooster, or something like that.

Michelle: Thanks, it was very good.

Fritos: I will give you the exact recipe if you want, but I bet you can figure it out. It's pretty easy.

Anon: It's delicious and very versatile - you can use it with fish, tacos, quesadillas, chicken breasts, etc., or just eat it as a side like we did.

Stephen: Is that 1.5 cups of yellow mustard, or do you use something else?

I use the basic French's yellow mustard, and Grey Poupon for the Dijon.

Seriously, those sliders look beyond scrumptious!