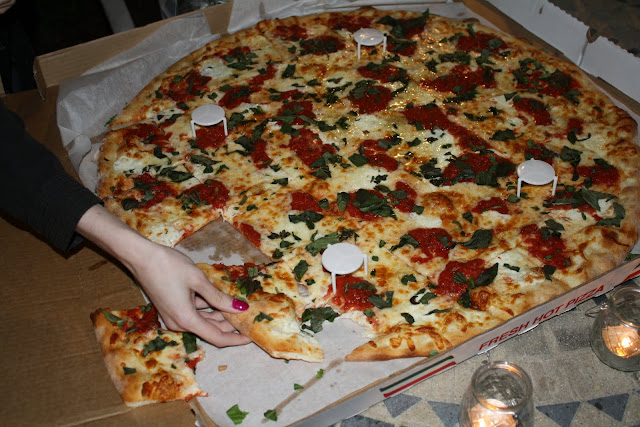 When I was a kid my dad had a book of cartoons titled "Never Eat Anything Bigger Than Your Head." My brother and I never understood any of them, though I admit we did like the drawings of boobs that were scattered throughout. Years later, when I was in my early 20s, I re-read the book and found it pretty damn funny.

Not more than four days ago I was over at my parents' house, moving some stuff out of one of the bedrooms in preparation for some house guests visiting from the Faroe Islands.  And I came across that book for the first time in years. I flipped through a few of the pages and tossed it aside. When do you ever really have the occasion to eat something larger than your head?, I thought to myself.

Saturday afternoon, Elizabeth and I sat on our patio drinking cold beers. Our friend Carla came and joined us. After a while we started talking about what to do for dinner. I gave three suggestions, one of which was Mamma's Brick Oven pizza. We decided on that and I brought up the menu on the internet.

Almost a year ago the three of us ordered a 16" x 16" pizza from Mamma's and it was more than enough. But we were all quite hungry on Saturday, so I half-jokingly suggested we get the "mega" pizza - 28" in diameter.

"Okay," Elizabeth said without hesitation. This surprised me; she is usually very quick to point out when my culinary ideas are ridiculous, which, to be honest, is most of the time.

"That's like this big across," I said, holding my hands apart.

"And get some garlic knots, too," was her only reply.

So I ordered the pizza and Carla and I went down to pick it up. I am not going to lie: I started laughing when they pulled out the box and loaded the pizza into it. Have you ever been lucky enough to visit the Grand Canyon? You may have seen thousands of pictures of it, but nothing prepares you for the sight. It is simply more than your mind is able to comprehend. I was reminded of that feeling upon seeing our pizza.

A guy at the counter was getting ready to place his order but started laughing as I picked up our pizza. "I want one of those," he said.

"Should we tell them this is for three people?" Carla asked.

Back home we cleared off the patio table. 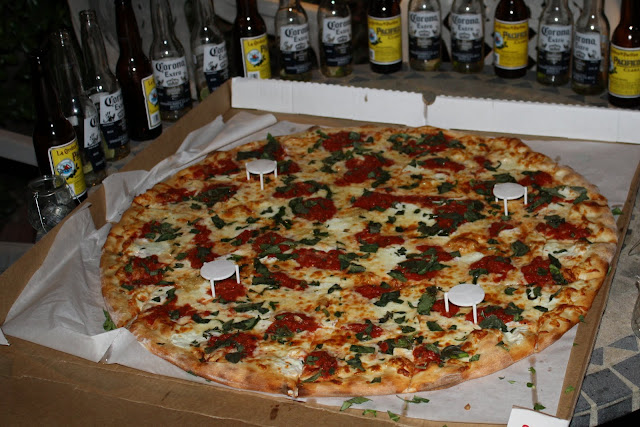 "Are you kidding me?" Elizabeth asked.

"Hey, I tried to explain how big this pizza would be."

"I guess I couldn't picture it," she said. "Besides, I'm used to being lied to about size."

(I think this might have been a joke at my expense.) 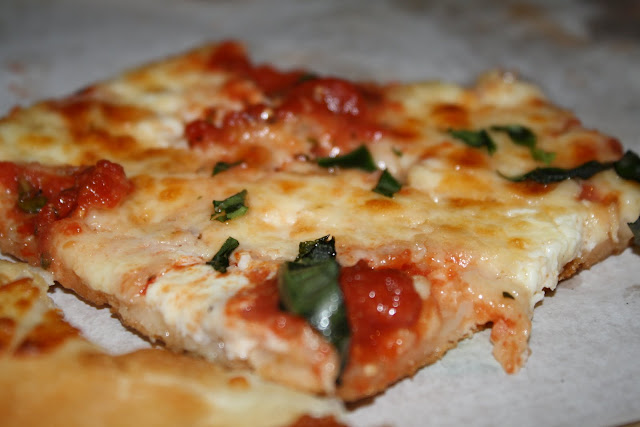 The obvious question: How was it? It was delicious. Mamma's Margherita pizza has long been one of my favorite pizzas anywhere in Southern California - perhaps even my favorite. The sauce is tangy and not too sweet, the cheese is tasty and the basil is fresh. Elizabeth grew up in New York, went to college in the Bronx and lived in Brooklyn for several years, and this is the only pizza within twenty minutes of us that she says reminds her of home.

But there is one caveat: with such a large pie, many of the slices in the center are doughy and not even close to being crisp. This was not a big deal for us; Elizabeth likes her pizza crust on the softer side and, since there were only three of us, I was able to eat quite a few slices around the edge of the pie, which were much firmer. 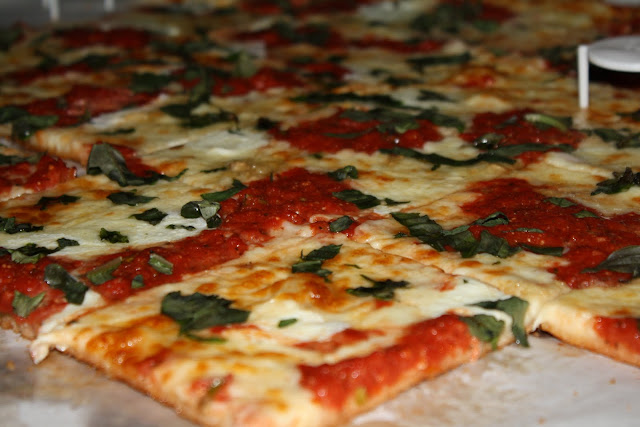 I sent a picture message of the pizza to a few friends. Zach's response was an excited "Oh hell yeah!" Tim responded that he would be home in a few minutes and he was coming over to see this thing in person.

Phil had a slightly different take on the situation: "I want to breed with that pizza."

Tim laughed when he arrived and saw the pie. He'd already had a big dinner but he still grabbed a slice and enjoyed it.

"What possessed you to get a pizza this big?" he asked.

"I didn't understand exactly how big it was going to be," Elizabeth answered.

"That's because Justin is always lying to you about size," he added.

(Now I was relatively certain these jokes were being made at my expense.) 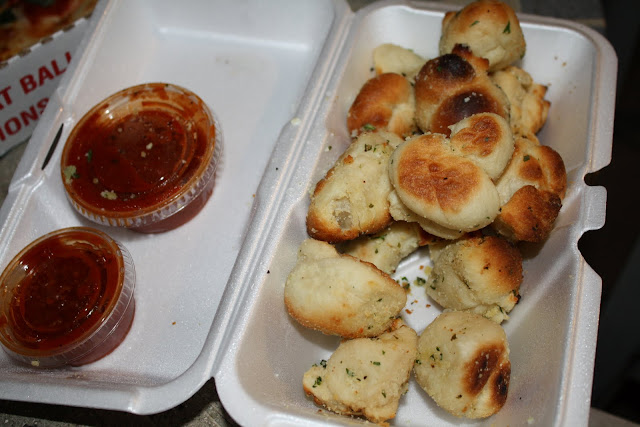 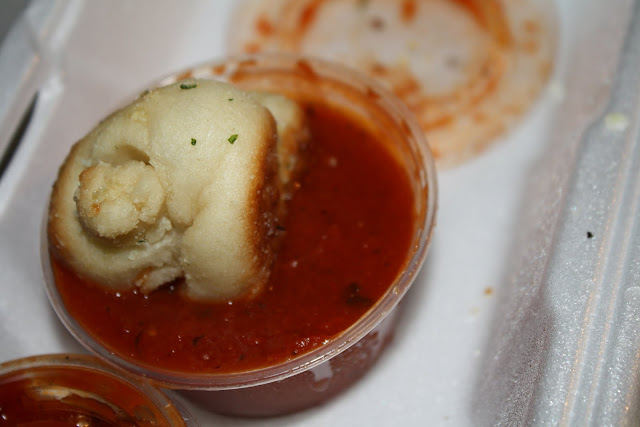 Thank God we got garlic knots so we didn't starve.

It probably doesn't surprise you to learn that, even after stuffing ourselves to the point of pain, we still had about half the pizza left. I took it inside - the box literally fit through the kitchen door with less than half an inch to spare - and piled the pizza on two plates, wrapping them with foil. I ate leftovers for breakfast, lunch and dinner yesterday and there are still enough slices left to provide dinner for two, which may well be what we do tonight. I mean, it's not like I ever get tired of pizza. 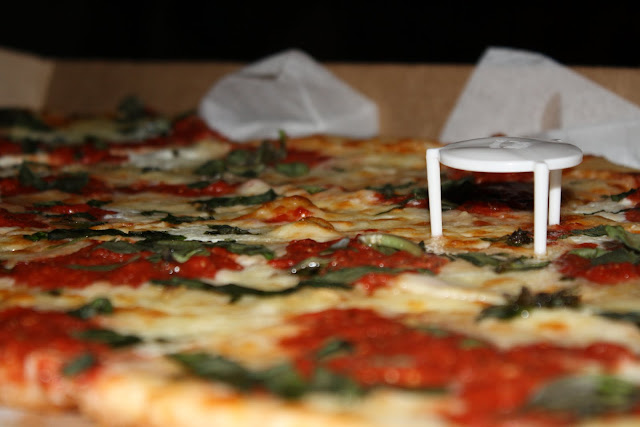 I will close with one of my favorite photos from the set, a sea of pizza.
Posted by JustinM at 8:46 AM

You guys are funny.

And if Elizabeth says that she likes it, I really feel like it has to be pretty great...I mean, that is East Coast pride talking, there!!

You know you’re starting to push the limits of the pizza-world-continuum when you need four tripod-squish-stoppers.

What other pizza places do you like in town?

I really underestimated the size of this pizza. But it was delicious! And it will continue to be delicious for the next several days until we run out of leftovers.

Fritos: My experience with New York pizza may not be as deep as yours or Elizabeth's, but I've been there many times and eaten a LOT of pizza, and Mamma's definitely would not be out of place there. I mean, it would never become legendary - the crust doesn't quite stack up to NYC - but it would certainly be acceptable.

Mindful: And there was no meat on it - you could have had some!

Anon: By "town" do you mean Pasadena? I will answer it like you do. I always liked The Kitchen in OT, but I actually haven't eaten there in years. I like the BBQ chicken pizza at Cafe 140 South. My buddy says he's going to pick up a couple pizzas from The Luggage Room one of these days, so I will give a report on that when the time comes.

There really is no pizza in town that I don't like - other than Pizza Hut - but other than Mamma's there isn't anything I really love. Over the last couple of years I have been much happier just making my own pizzas at home.

Liz: That's because I'm always lying to you about- wait, I think we've covered that joke enough. I actually took out a couple slices to eat for lunch today but forgot to take them with me, so it's entirely possible the cat has eaten them by now.

that pie is big enough for multiple people to breed with it... simultaneously... God bless ya'll for ordering that beast!

pp- did you guys drink all that beer (the pic with all the empty bottles) in one afternoon?

and one more thing pp-

i realize this may be too personal, but please tell me how your folks know people from the Faroe Islands. i just googled them and i was like wtf? but, you know, in a good way.

Anon 2/3: Yes. It was a nice hot afternoon and we were thirsty.

I included that to see if anyone would Google Faroe Islands. I had to do so myself. It's an old family friend, her son was my best friend when I was very young (like 3 and 4). She is now a missionary in the Faroe Islands.

Haha. Yeah, that thing is huge! I like how you artfully alternated between the Pacifico and Corona bottles...

Mr mule--thanks for the info. I never knew the technical name for those things. Now I do--tripod-squish-stoppers.

I suggested putting the bottles on the table for the photo. It probably doesn't surprise you that Carla is the one who decided to make it look "artful."

How much did it cost?

Interesting. You're the first person I've heard describe it that way. Certainly if it's anything like LGO I expect it to be overrated and pretentious, but I at least thought it would be decent pizza. I guess I'll see one day.

I must, and will go back to this place.
thanks for reminding me about it...now i cannot decide..Chinese or pizza tonight?