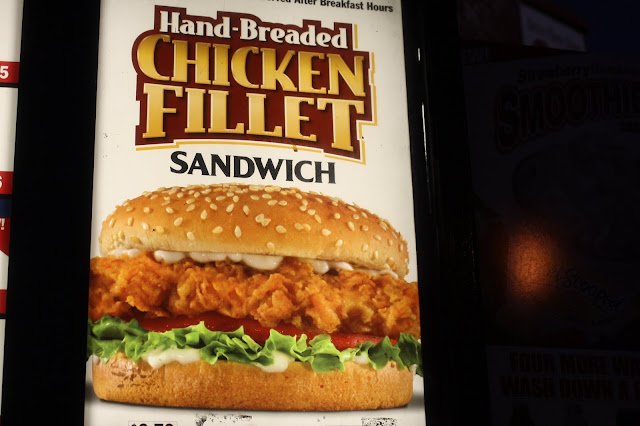 I never really decided how I feel about the Carl's Jr. Hand Breaded Chicken Tenders: the first time I tried them (at the Carl's in Hastings Ranch) they were delicious: crispy, juicy, and literally too hot to handle. The second time I tried them, as an excuse to try out the "Kickin' Asian Sweet & Spicy Sauce" (at the location on Lake Ave) they were terrible: shriveled, burnt, and barely lukewarm.

The owner of that location emailed me and offered me a free meal as an apology, but I never responded. There are only so many meals you can eat in a lifetime, you know? Repeated meals of Double Doubles, dim sum, pizza, Belgian fries, Bald Eagle, lobster rolls, prime steaks... these are all understandable. But I just didn't feel the need to return and eat chicken tenders that had previously been terrible. Even for free.

Besides, I'm not a big fan of Carl's Jr. anyway. If I listed my favorite fast food chains, Carl's would be a lot closer to the bottom than to places like In-N-Out, Fatburger, Del Taco, and Popeyes, where I almost always enjoy my meal. (I believe I have a 100% satisfaction rate in what have literally been hundreds of meals at In-N-Out.) So I let it go. The only two times I have eaten at Carl's in 2011 were trying the turkey burger when it first came out and trying the habanero bacon cheeseburger in Orange County. Both were bad.

Yesterday I read about Carl's newest concept: hand-breaded chicken, this time in fillet form, in a sandwich. I do love a good fried chicken sandwich. I doubted Carl's take on it could be anywhere near as good as Church's fantastic Southern Style Chicken Sandwich, but still I thought it would be worth a shot. Especially once I printed out a $1-off coupon from the Carl's Jr. website - knocking the pre-tax price down from $4.29 to $3.29 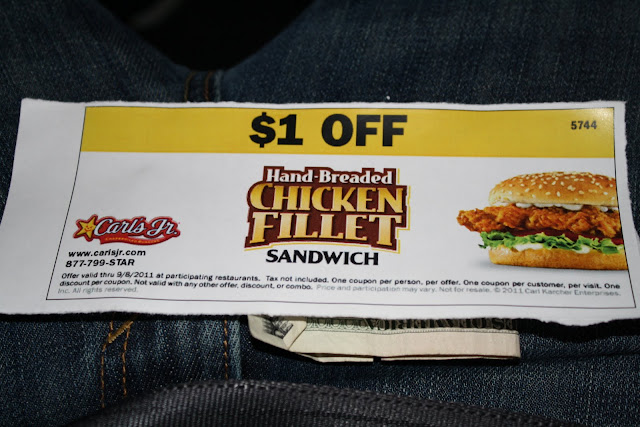 I went through the drive-through. Normally I hate doing that, but I figured with only one item they couldn't screw it up too badly. I ordered the sandwich and waited for several minutes. But at least it gave me time to text with my friend Bryce about the crazy Lamar Odom trade rumors. And take a picture of the coupon... you know, in case you doubted my claim to have one. 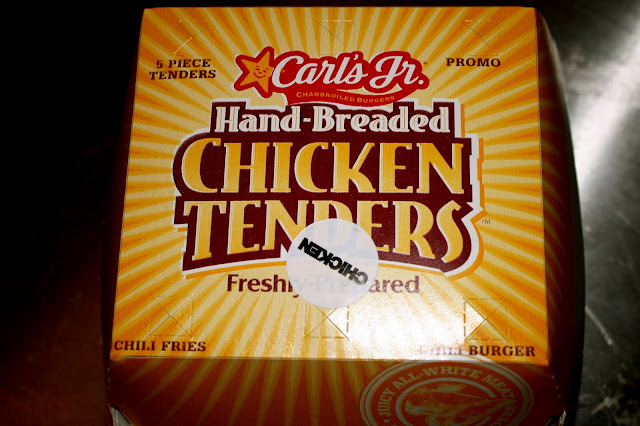 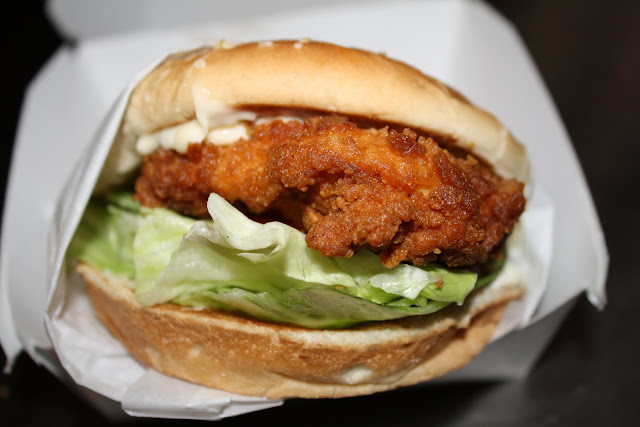 At first glance, the sandwich looked good: a thick piece of chicken, dark golden-brown all over. This clearly was not like the lousy, bald-in-some-places chicken strips I had on my second attempt at the tenders. 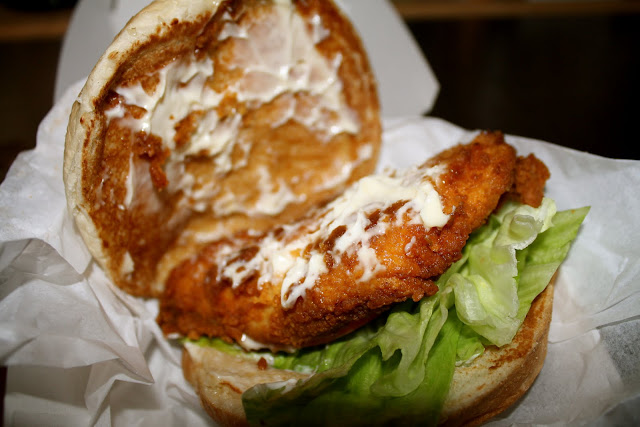 I'm not sure the sandwich needs mayonnaise. I am sure it doesn't need this much of it. 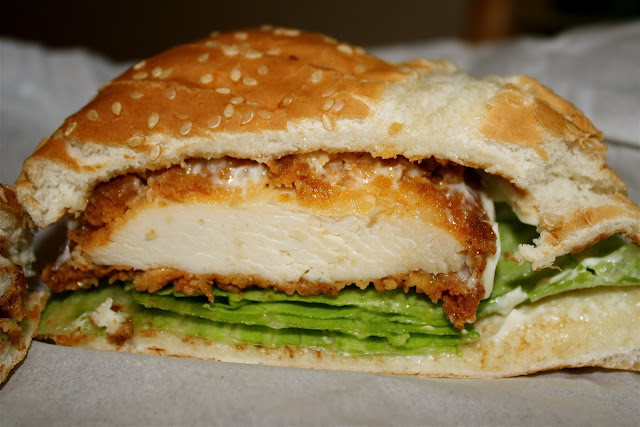 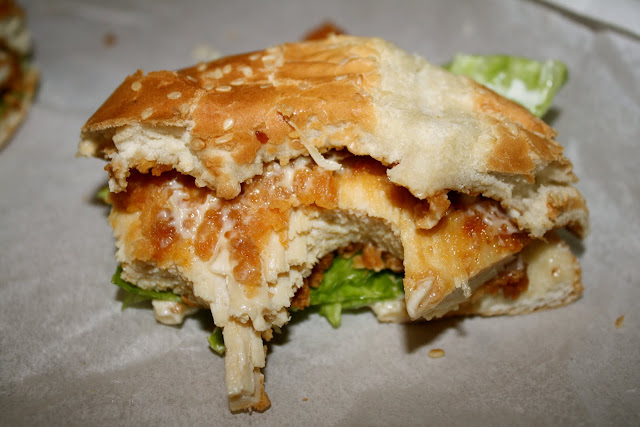 This will sound like damning with faint praise: it was decent. The chicken was thick and juicy and the breading was crispy. This was reminiscent of the first time I tried their chicken tenders. But the whole thing was relatively bland. The bun was the same slightly-stale bun that Carl's Jr. always uses. The breading was flavorless and started sliding off the chicken after two bites. I shook some hot sauce onto the sandwich, which improved it a lot.

With the coupon, it is barely worth it. At the full $4.29 price, it is not. The Church's sandwich was $1.99 and was bigger, much more flavorful, and served on a soft, fresh bun.

If I'm on a stretch of highway somewhere and Carl's Jr. is the only fast food place, I would get one of these chicken fillet sandwiches again, and I would not be too upset about that. Barring that, I do not envision any scenario in which I will ever eat one again. When it comes to fried chicken sandwiches, there are just way too many better options around.
Posted by JustinM at 10:00 AM

I am not a big fan of Carl's Jr. either, although in my youth it was the source of my favorite sandwich. We would eat there sometimes after East Pasadena Little League games. The store design was a little different then, almost a hybrid between a fast food restaurant and a full service restaurant. The restaurants had very comfortable, fully padded booths, somewhat dimmed lighting in the dining area and your food was served to you at the table. The sandwich I loved was called the "California Roast Beef Sandwich". It was a hot sandwich with sliced roast beef, Swiss cheese (more like white American cheese in actuality), an over-sized Ortega chili, and aus jus on a French roll. It was very good. I understand that it was brought back for a period a couple of years ago, but the reviews were tepid as many claimed it was not the same as the original sandwich.

I love how you make burrata and roasted pepper pizza with old Mondavi Cab one day then eat a fast food chicken sandwich the next!

needs tomato and onion or in PP's case, just onion

I wonder if it contains any wood byproduct?

I decided I would skip this after seeing the name; I wonder how much of the breading process is performed by hand, and I'm not even saying skilled hands.

Stephen: I feel like I might remember that, but it's possible I just remember seeing pictures of it on other websites. There was an In-N-Out by my school (and where my mom taught) so I ate there a lot when I was a kid, but other than that, fast food was not much of a part of my life at all. Sure, every once in a while my grandmother took me to McDonald's or one of my parents took me to Del Taco (I've always loved their crinkle-cut fries) but places like Carl's Jr., Taco Bell, Wendy's... I don't ever remember eating at any of them as a kid.

Heather: I am nothing if not versatile.

Anon: It had tomato, I just got rid of it.

Ben: At least wood is natural, right? It could always be worse.

Julien: The commercials make it seem like they dip each piece of chicken for you when you order it. The first time I ever tried them I went in to a really busy Carl's, and I assure you, they were dumping already-breaded chicken out of a bag into the oil.