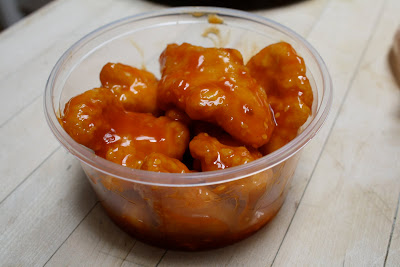 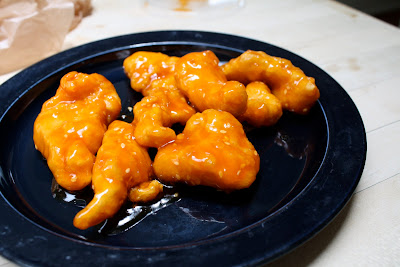 I was over at my parents' house three days in a row last week, doing various things. There was nothing in their fridge to eat so I went to the nearby Ralph's. I did not want to cook anything fancy and make a mess in the kitchen (they were having a big dinner party on Wednesday night and guests coming in for the weekend) so I restricted myself to things that could be eaten with only a microwave, a device that I use about once a month these days.

From the deli I bought a small container of orange chicken. It was absolutely horrible. The chicken was tough and stringy and the sauce was almost indescribable: it was sort of sweet, like orange juice, but also tasting of burnt sugar. The smell was not good. When I was a kid, my mom accidentally nuked a Fjord fork in the microwave; it was the worst smell I have ever experienced. (Sometimes I exaggerate things for the sake of the blog - this is not one of those times.) This orange chicken smelled very similar to that. 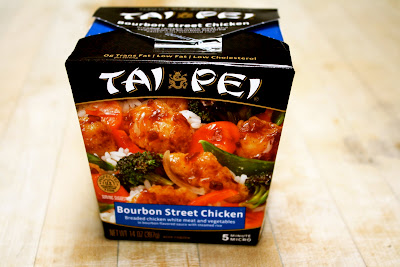 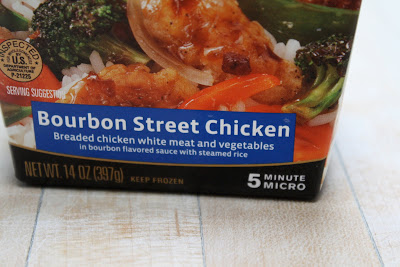 I know I have tried one of these Tai Pei frozen Chinese entrees before, but I don't remember which (or how it was). So I decided to try the Bourbon Street Chicken. (I really wanted egg rolls that day, but frying some on the stove would have made a guaranteed mess.) I cooked it in the microwave for 5 and a half minutes then let it sit for another two. 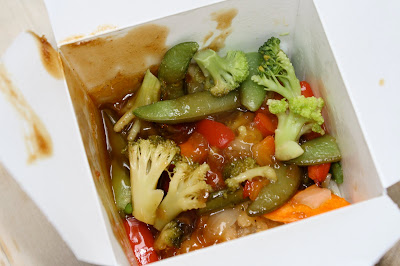 They certainly don't fill up the carton very much, I discovered upon opening it. I inverted it and dumped it out. 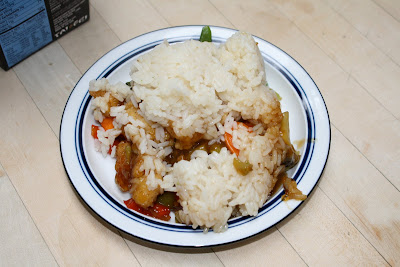 Now I see why these things are so inexpensive: the containers are only filled about two-thirds of the way, and what remains is mostly rice. 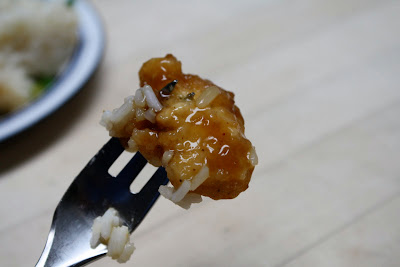 Here is one of the four (4!) tiny pieces of chicken that were in the meal. The sauce was actually quite tasty, but the chicken was exactly what you would expect from something microwaved: very hot and very rubbery. 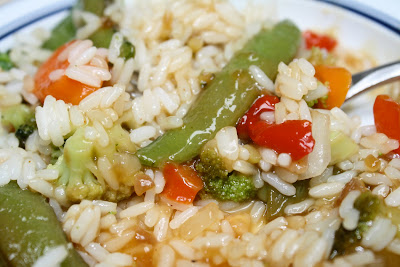 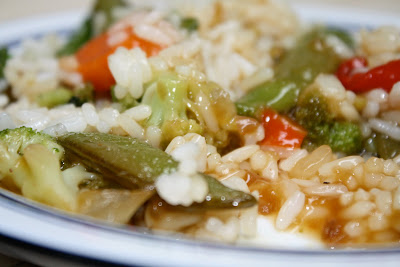 The veggies and rice were very good, though. The bourbon sauce - unlike the kind you get when the girl at the mall hands you a free piece of bourbon chicken on a toothpick - wasn't too full of salt. It was a sweet, slightly-tangy sauce. I don't think I will ever eat this entree again, but for $2, I can't complain too much. 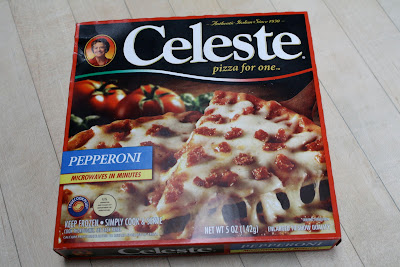 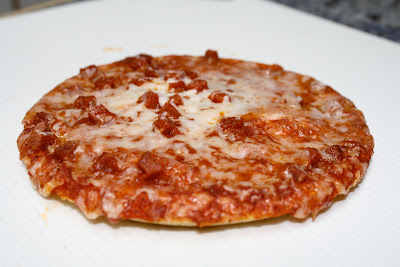 I honestly could not begin to guess when it was that I last had a Celeste pizza. 15 years? 20? I certainly loved them as a kid, but then again I also loved professional wrestling, Full House, and eating marshmallows until I got sick. But Ralph's had Celeste pizzas prominently displayed and on sale for $1, so I thought Why not?

I microwaved it for three minutes and took it out, expecting the worst. And certainly it was not attractive. The crust was a soggy, sad little mess. But the flavor of the pizza was actually... really good. The cheese tasted more like real cheese than most frozen pizzas and the sauce and pepperoni were tasty, too.

I'm not going to make eating these a habit - it wasn't that good, not to mention it was almost 400 calories for something I ate in about three bites - but it was by far the best of the three lunches.
Posted by JustinM at 12:04 PM

Yeah, I mean, it's hard to feel cheated when it was only two bucks and the rice and veggies were tasty... but I almost would have rather not had any chicken and just given me more veggies, you know?

Oh man, you ate Celeste pizza? Youz a dare devil. And your exaggeration (which was clearly an actual portrayal of the situation) is highly appreciated.

I've always found it funny when a product name starts with "chicken" when chicken is pretty low on the ingredients list. I guess, in this case, even the title didn't lie.

I love Celeste pizzas. But you can't make them in the microwave b/c of what you experienced. Make it in the toaster oven and you're good to go. I keep a large cache of these at the house b/c they're cheap and good when you're drunk or hungover. Just ask Ty.

I totally forgot I have a toaster oven in the garage. That's a good idea. What is your favorite flavor?

Ty drunk or hungover? I can't picture it.