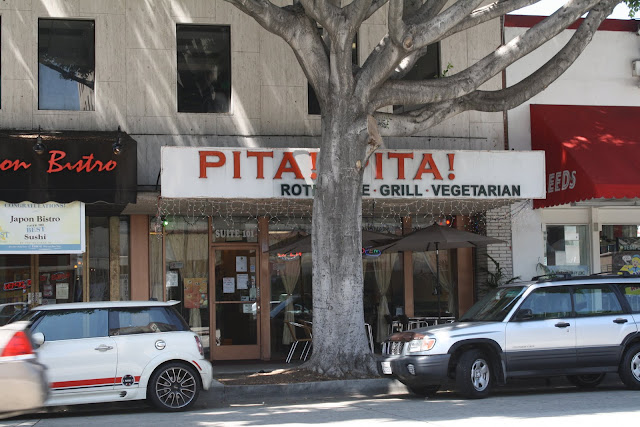 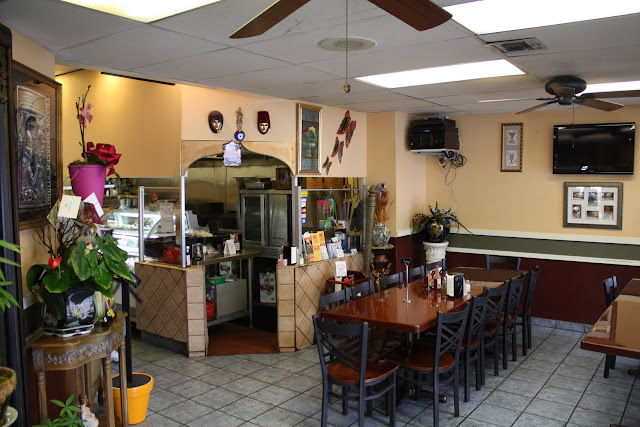 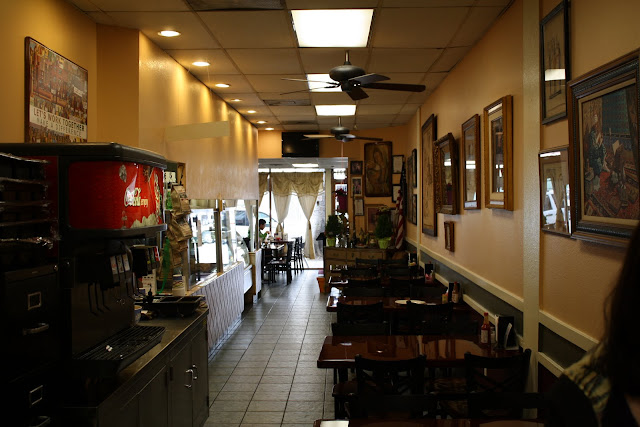 There was a time in my early 20s when I ate at Pita Pita a lot. At least once a week. But that was more than 8 years ago and in all that time I never returned. I have no specific reason why. Then a month ago an acquaintance was asking for a Mediterranean recommendation when his favorite place (Mediterranean Cafe) was closed. I suggested Pita Pita; he went there and reported back that it was great. I made a note that I had to return.

Last week my parents and brother ate at Japon Bistro, which is literally right next door to Pita Pita (the two places even share the same street address: 927 E. Colorado, just east of Lake). So on Saturday, when Elizabeth and I called off our plans to eat lunch al fresco (because of the hideous June Gloom) and trying to decide what else to try, Pita Pita was fresh on my mind.

The restaurant bills itself as Lebanese cuisine, though every employee there was Hispanic and the table next to the one at which we sat contained two leftover, half-eaten plates: one of pinto beans and one of french fries. We took a minute to look over the menu. 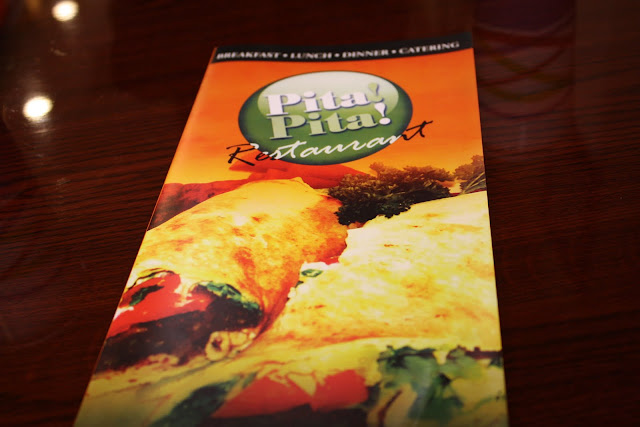 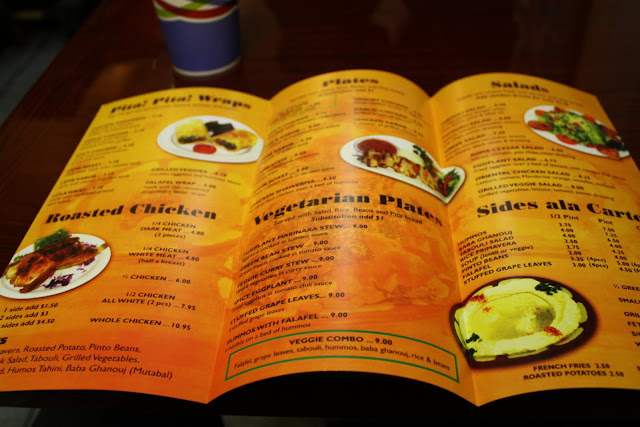 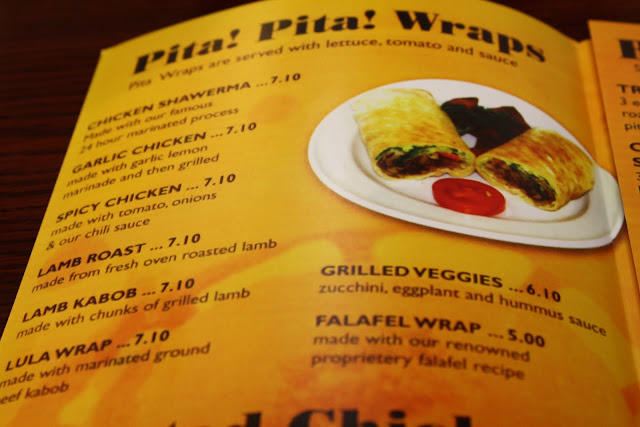 I ordered a garlic chicken wrap, Elizabeth the spicy chicken wrap, and some "spicy fries" to share. We placed our order at the counter and took seats at a table. 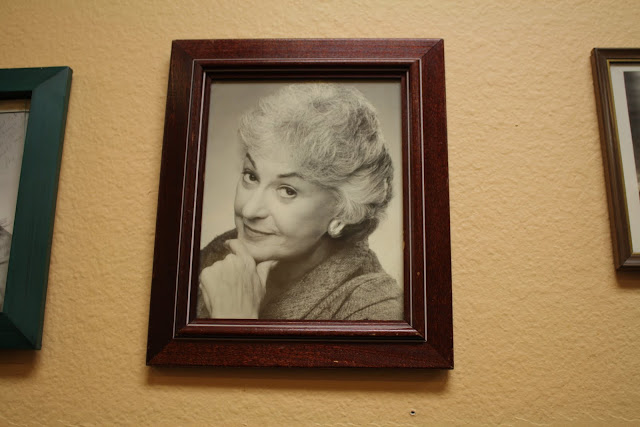 Under a picture of Bea Arthur. 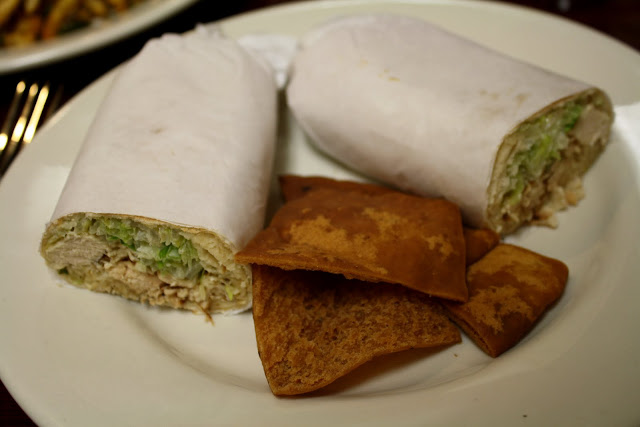 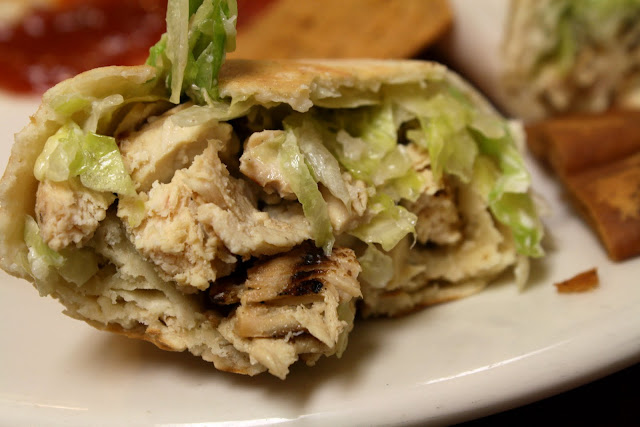 Between ten and fifteen minutes later, the woman who had taken our order brought out the food. The size of the wraps was impressive: they were both about ten inches long, cut in two, with a few scattered pita chips on the plate.

And they were delicious. The wrap was toasted and warm, almost hot, but the insides were still cool. I'm not sure how they managed to do this, but they did it perfectly. The white meat chicken was fresh and juicy, the sauce was slightly-tangy (I wished it had been more garlicky, but then again I can say that about most things), and the lettuce was crisp. This was the best wrap I have had in as long as I can remember. Actually, that's not quite true: 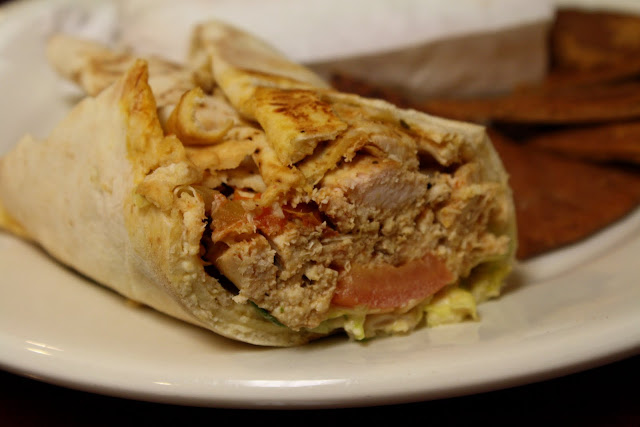 Elizabeth's wrap was the best wrap I have had in as long as I can remember. She was kind enough to give me a couple bites. The chicken was a little bit juicier in her wrap and the sauce was spicy. 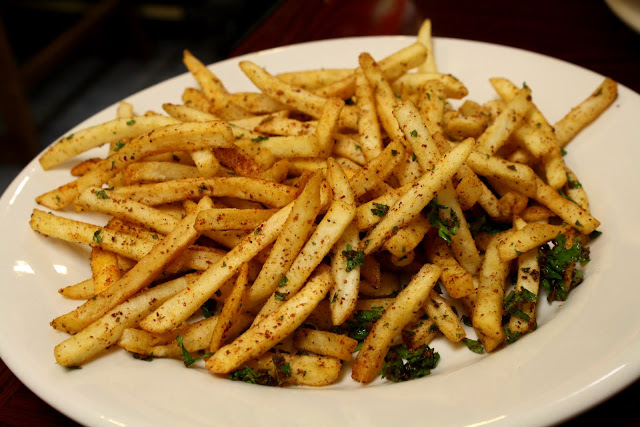 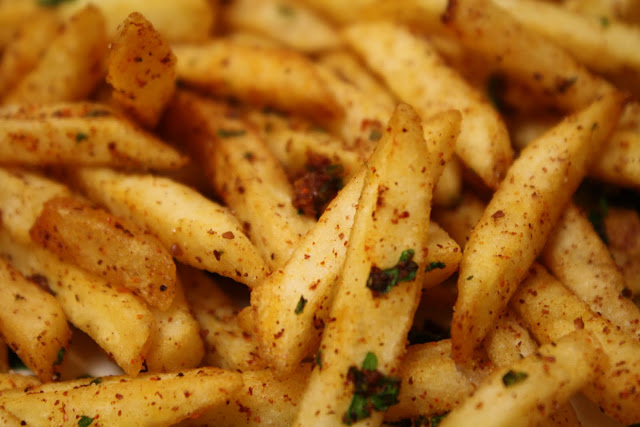 The spicy fries were awesome. The shoestring potatoes were crispy and hot, covered in Mediterranean spices and herbs: paprika, chili powder, garlic, parsley, and probably a few other things I could not place. 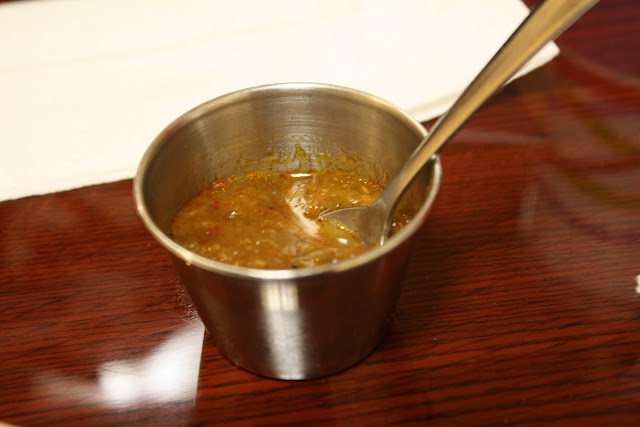 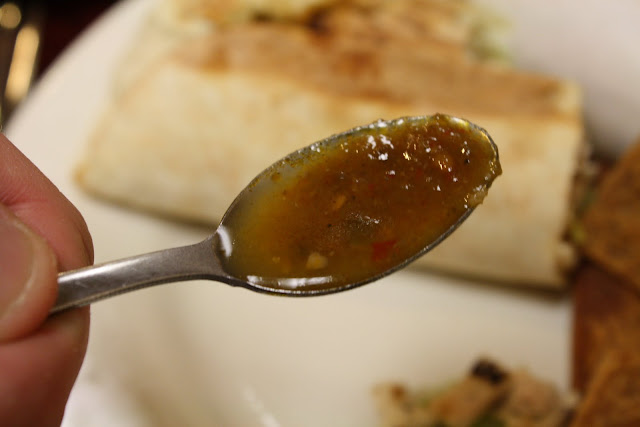 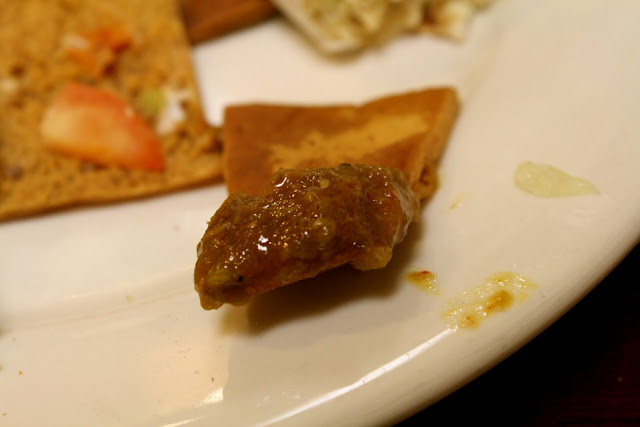 The lady had placed a small container on the table with our wraps. I asked what it was. "Spicy sauce," she answered. I know I have a high tolerance for heat, but still, I don't know how this could be considered spicy. That being said, it was tasty. It added nothing to the wraps but was a nice complement to the pita chips, and it turns out that mixed with ketchup it provided a tasty condiment for the fries. (Though the fries needed nothing to improve them.)

It's easy for me to understand why I once liked Pita Pita so much. Less obvious is why I let more than eight years go by between visits. Lunch for the two of us was just over twenty bucks (and we each got sodas, not pictured) and we had plenty of food. In fact... 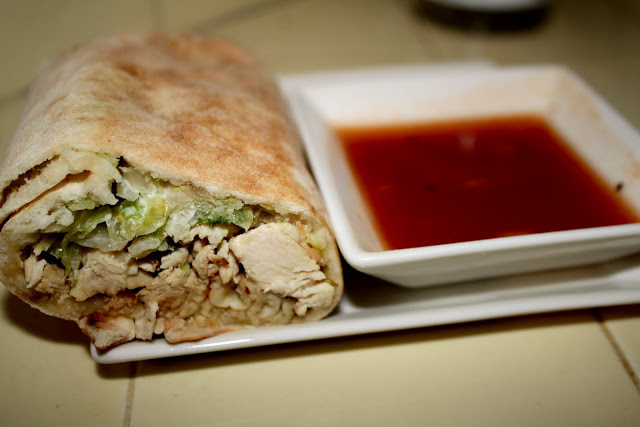 ... each of us only ate half of our wraps at the restaurant. That evening I ate the remainder of mine for dinner, with a spicy, Eastern-Carolina barbecue sauce that I mixed together. It was almost as good as it was at lunch.
Posted by JustinM at 10:07 AM

I noticed that the photo of Bea Arthur had no autograph. I'd be happy to do that for them.

I declare that any restaurant which serves food that is just as good (or better) as leftovers deserves an extra star.

Amy and I went a couple months ago on a whim and really liked this place as well. Will need to go back as those fries look tasty.

Justin, do you recall the name of the wrap that Elizabeth had? How did these stack up to Zankou's? Thank you.

Nosh: There were autographed pics of Dennis Haysbert and Congressman Schiff above the next table, but I went for the gold (en girl) standard.

Anon: I assume that means something different than the one definition I know. Yes, they were very good.

Bryce: Man, I don't even remember the last meal I got to share with Amy. It must have been when we made pulled pork nachos at your place more than three years ago. Damn.

Stephen: I was being literal; the wrap I got was called the "garlic chicken" and hers the "spicy chicken."

Comparing them to Zankou is tricky. Zankou is more like a thick taco, in my opinion. Pita Pita is like a burrito - the lavash wrap was grilled (or toasted) and almost hard. But really, if I had to choose, I would stick with Zankou, simply because their sauce is without equal.

Thank you, I totally missed your entry under the menu!

Wow, these pitas were good. I loved the spicy chicken but think next time I will definitely go with the garlic chicken. And everything was so fresh!

I like this Pita Pita place. It feels wholesome to me - sorta like a cafeteria though. I loved the Pita Pita on Fair Oaks in Old Town from like 10 years ago – that place had a nicer dining feel to it.

I have never heard of PIta Pita but it sounds delicious. And whoa, Bea Arthur! Coolness. Good thing for June Gloom, eh?