The Jack in the Box Taco 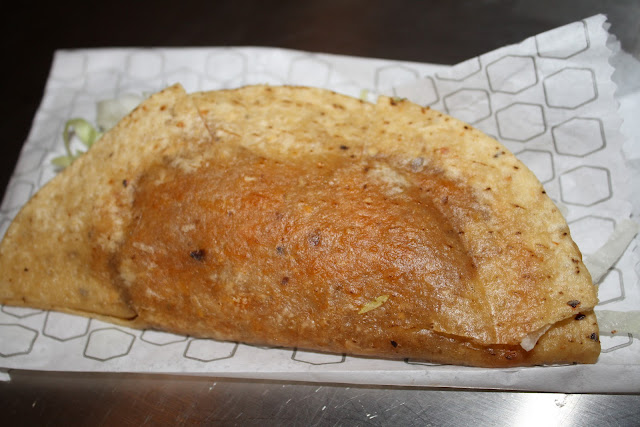 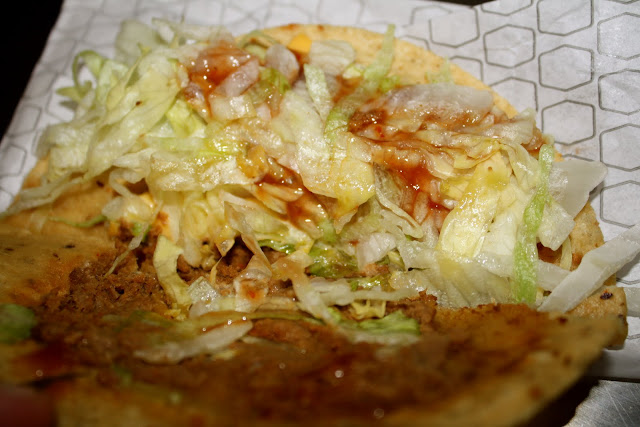 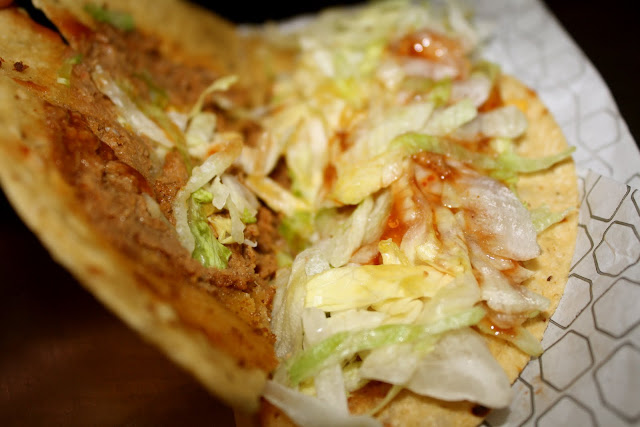 I've chased down some weird fast food promotions for the sake of the blog over the last three years. I ate what can only be described as a hot dog made of fish, drenched in a tartar sauce that smelled like milk and urine. I ate a burger topped with a cheesesteak sandwich. I even wrote something about the McRib that got my name in the Wall Street Journal.

But the truth is that none of the promotions I have tried are quite as bizarre as a regular menu item Jack in the Box carries: their tacos. Usually sold at a very low price - at the moment they are two for 99 cents - Jack has served their tacos for more than 50 years. According to their website, they sell more than 400 million tacos per year.

The tacos are difficult to describe: the shells are always crispy and greasy and the insides are a paste. I mean, there is definitely lettuce, but there is also an indeterminate puree of what, to me, have always been unrecognizable flavors. There is cheese but I do not taste it.

It has long been rumored that these tacos are vegetarian, that the insides are soy meat. And, while there is "textured vegetable protein" (containing soy flour and caramel color) and "defatted soy grits," the main ingredient is beef.

(I once went out with a girl who was a vegetarian. It may not surprise you to learn that it did not last long. She insisted that Jack's tacos were vegetarian. I assured her they were not. She said she had been eating them for years and there was no way they contained meat. So we inquired at Jack in the Box one day. I was correct and her reaction to learning that she had been eating cow parts for years was perhaps my singular happy memory from that relationship.)

Only here's the thing: they definitely taste like soy meat. I have had soy tacos many times in my life and they taste exactly like this. It's not so much a bad thing, just a... weird thing. The ads for the tacos show a tortilla filled to them brim with beef; every single JitB taco I've ever had looks like the one above: very little protein, spread in a thin layer against one wall of the shell.

It had been years since I'd eaten one, but the other day I saw the 2-for-99-cents sign and decided to try them. Even covered in oil, the taco was room temperature. And bland. I had to squirt in a packet of Jack's taco sauce - which is actually quite tasty - to get some flavor.

I ate one of the tacos, put the other in the fridge and forgot about it. I ended up throwing it out. I don't see any situation in which I will ever again order one of these. They are so strange that I am sure some people completely love them. But they're not for me.
Posted by JustinM at 11:36 AM

I'm the opposite! I love em but I can understand why people hate them.

I am one of the people old enough to remember the first JITB stores, and that "taco" hasn't changed in 50 years.
When we tried them as kids we kinda liked them - they were salty, greasy treats. But after a few times happily eating them we determined that they were filled with canned dog food and gave them up. My daughter brought some home a while back and offered to share. One whiff and I knew it was the same recipe.
The soy idea seems very sound to me. It would be a damn sight better than the dog food taco.

Love them, love Jack in the Crack. Go to order from stoner high school days:

i freaking luv jack in the crack's tacos. the crunchiness of the shell. the fresh crispness of the lettuce. and the insides to me just taste like greasy, taco-y goodness. i order them sans the hot sauce, cuz im a girly man like dat when it comes to spicy stuff.

That's funny, the thing is, LOTS of products are made for stoners. We all realize this. But Jack in the only mainstream place I can think of that actively advertises to stoners.

Though I don't consider them anything fantastic, I have eaten my fair share. Actually, whenever we would send pledges on scavenger hunts (which they thought meant something while, other than helping prove they were acceptable new additions, they didn't), we would always have them bring 50 of them back to the house before they took care of anything else.

They aren't fine dining, but they play their role, mainly absorbing alcohol and being cheap.

I used to eat these all the time. I still get a craving for these weird little "tacos". I try and balance it out by ordering a fajita pita :)

kind hard to believe you went out with a vegetarian, a girl who doesn't eat meat. so it doesn't surprise me that you didn't last long with her!

PS: who stepped on your tacos?

Cafe, she was a vegetarian, a Red Sox fan, she loved Cheesecake Factory and most of my friends didn't like her. I really hit the jackpot. All I can say is I was young and she was hot.

Every once and awhile I get a Jack in the Box taco that wasn't made days/weeks/years earlier and just nuked in the microwave. You can tell, because the "cheese" still looks sort of like a slice of cheese rather than melted into the mystery "meat"(?) paste.

In any case, Jack tacos are one of my guilty pleasures and I don't even really enjoy them while eating them.

I think that Jack In The Box Tacos are comparable to New Orleans, or black licorice. People either love them or hate them. I happen to love them and just recently came across a copycat recipe that turned out extremely well. I offer it here (in an additional post due to Blogger's "character cap") for those that enjoy these as much as I do. The only caveat is that it is a complicated recipe. Making these produced a very good result, and great satisfaction, but when you compare the caloric output, and expense, the 2 for 99 cents seems like a much better idea.

1 PLEASE NOTE: THESE ARE MAKE-AHEAD TACOS. YOU MUST FILL THEN FREEZE TACOS BEFORE FRYING FOR AUTHENTIC RESULTS.

3 BROWN the ground TACO BEEF in a skillet over medium-high heat while stirring without overcooking (drain ground beef if necessary); POUR the blended SEASONING MIX into the 1 lb browned TACO BEEF in skillet; RAISE heat to high and BOIL mixture for one minute, stirring; REDUCE heat to medium and COOK mixture, stirring occasionally, until very little liquid remains and ground beef is moist yet not soggy.

4 COVER beef mixture and reduce heat to low; SIMMER for 5-7 minutes to steam and tenderize meat, and for flavors to infuse fully (ADD more water to refresh consistency if needed). Take the mixture and either blend it, or use a food processor, to create the "paste" that is the signature of this dish; DIVIDE enough needed American cheese slices diagonally; SHRED enough needed iceberg lettuce.

5 WARM a stack of corn tortillas on a plate sealed with plastic wrap in microwave for 30 seconds; ALLOW to rest for 2 minutes until pliable (this helps tortillas from tearing).

6 SPOON 3 tablespoons of beef filling mixture into each tortilla; FOLD tortilla in half; PRESS bottom filled half carefully without tearing tortilla using a taco press or makeshift mold ); LEAVE taco tops open by about 1 inch; PLACE each filled, formed taco side-by-side carefully into large Ziploc bags; FREEZE overnight or until ready to deep-fry.

7 PREHEAT deep-fryer with manufacturer's recommended amount of canola oil to 220 °F and then RAISE heat to 350 °F.

8 FRY tacos one at a time for 45 to 60 seconds at 350 °F while supporting each taco with a taco press or tongs; PLACE cooked tacos on absorbent paper to drain slightly (I recommend one person frying and one person assembling for better efficiency and fresh, hot tacos!).

Wow. Thanks for sharing. But if my only choices are love it or hate it, I gotta side with the hate it camp.

I do however, love New Orleans and black licorice, so if you can help me out with either of those things...

I love them both too! We are going to New Orleans in October, I may ping you for dining tips.

I agree with the direct stoner advertising observation, and quite honestly its why I order them. When I get the munchies they satisfy that craving for greasy richness. I treat them for the scooby snack they are and opt for more efficient, non fast food when I'm not in orbit.

Jb tacos r the best hangover cure in the world!

I prefer the Del Taco chicken soft tacos, but more than one person has told me that about Jack's tacos.

I have been eating them for 40 years now. The shocking part is the price hasn't changed..But I do agree without the hot sauce not worth eating.

The Jack in the Box tacos are great! Good processed fakeness as fast food should be!They remind me of a grocery store item called Mini Tacos, they came in a tv dinner type foil tray, Bout six in a pack? Anyways the meat filling tasted the same . Go Jack!

Way back in the day Jack was owned by Purina (yes, that Purina...)
Draw your own conclusions. Personally, I'm in the guilty pleasure camp - been eating them since 1968.