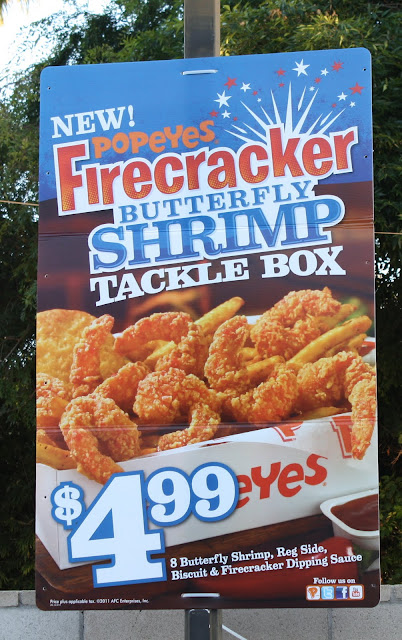 A new Popeyes promotion always gets my attention: they are almost always delicious. So when I read yesterday morning about their newest offering - "eight butterflied shrimp marinated in a spicy cayenne pepper seasoning" - I knew what my dinner was going to be. Also grabbing my attention was the description of the firecracker dipping sauce: honey, Crystal hot sauce, and Aleppo pepper flakes.

I headed up to Popeyes, placed my order (I added a drink to make it a $5.99 combo), was told it would be three minutes and sat down to wait. Five minutes later (close enough) I was handed a tray with my order. There was a container of cocktail sauce on it.

"May I have the firecracker sauce, too?" I asked.

"We serve the shrimp with cocktail sauce," I was told.

"But I want to try the firecracker sauce," I said, pointing at the menu that promises the sauce.

I usually get a kick out of this, when a fast food joint pastes posters in the parking lot and signs in the windows for a new promotion and then fails to have one or more elements of the promotion. But on this occasion I was just annoyed: I really wanted to try that sauce. If she had told me they didn't have it when I was ordering, I would have gone to another Popeyes. (Which, of course, is probably why I wasn't told.) 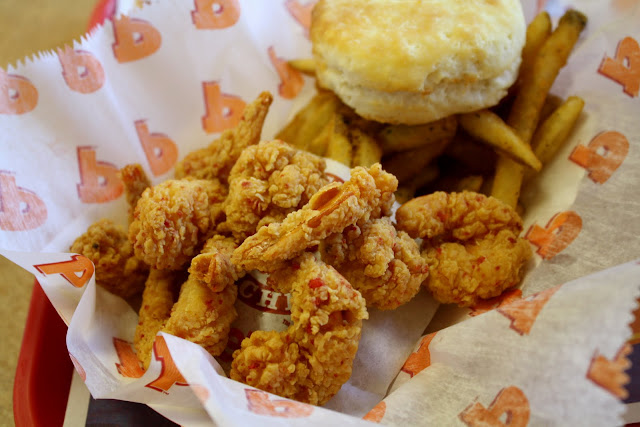 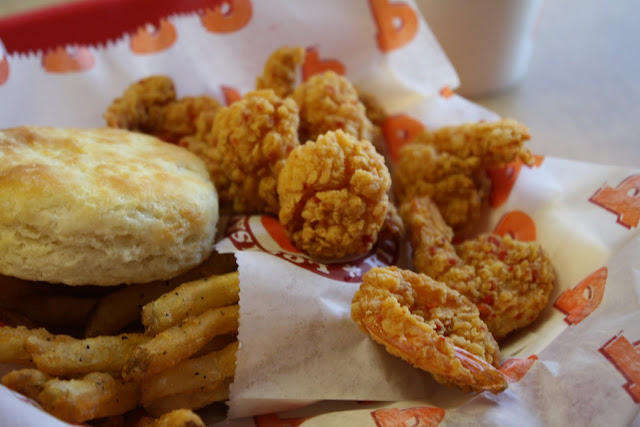 Now that I've gotten that out of the way, I will say this: the shrimp were delicious. Meaty pieces of crustacean and a crunchy, slightly-spicy coating always please me. Like many of Popeyes promotions, these shrimp would not have been out of place at twice the price in a fancier fish restaurant. I could have easily eaten two dozen of these little things. 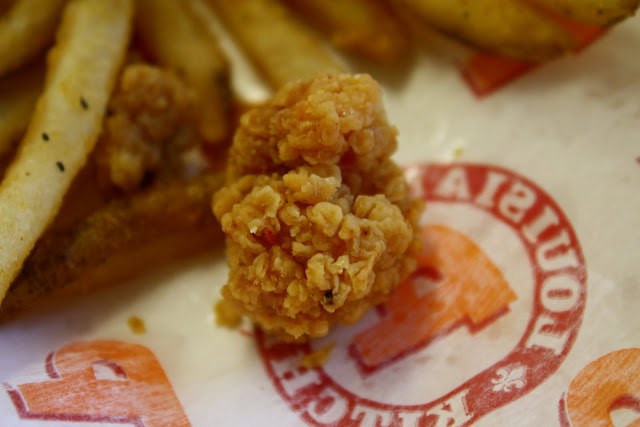 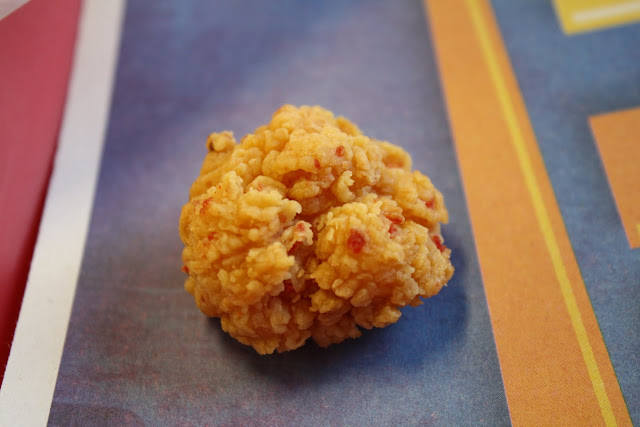 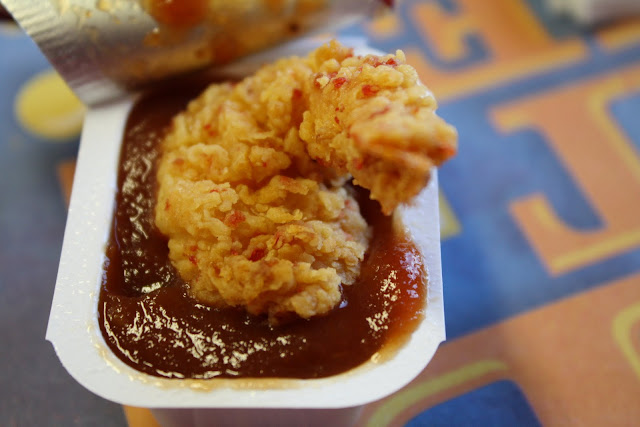 Of course, the high quality of the shrimp was something of a mixed blessing: while I loved every bite, all I could think was: Wow, these would be even better with the firecracker sauce. Popeyes cocktail sauce is fine - they even keep it refrigerated - but it was not what I wanted.

These aren't as good as the crawfish, but they are better than the red hot popcorn chicken, garlic butter shrimp, and wicked chicken.

I would absolutely try these again, but first I will ask if they have the firecracker sauce, and I recommend you do, too.
Posted by JustinM at 10:15 AM

These were really good! I was surprised at the good amount of spice they had.

For some odd reason, my local store isn't even advertising these yet, and neither is the one by my job in Burbank. Guess I'll have to wait. I won't hold my breath for the firecracker sauce either.

You have a good memory though, my mom's side is from Louisiana. Of course I have my Trappey's. Got Crystal in the cupboard too.

Also, I've recently become a big fan of Trader Joe's, and it's in large part because of your blog. I didn't know what I was missing.

Well, I did go there the first day of the promotion, so it's possible they will get the sauce eventually... but that's my point: if they didn't have it yet, why not hold off on advertising the promotion, like the two locations you mention have done?

Glad to hear about your Trader Joe's experiences. There are some duds among their products, but there are a lot of great items and all reasonably priced. Do you have any favorites?

So you ordered firecracker shrimp and got... Shrimp? Weak. Damn popeyes for being so delicious that we will deal with their bs!

Well, the shrimp were still great and a touch spicy. Even if Popeyes decided not to serve the sauce with them at any location, it would still be worth it.

The shrimp were good size, very flavorful. Dang if my locatioin didnt have the sauce either. Great Shrimp! love the spicey flavor and the crunch. they should keep this on the menu all the time.They tell me its only available for a little while.
James Watson

We went to Popeyes in Natchitoches, LA and decided to try the Firecracker Shrimp. When we got our food we laughed... In the card board container was 7 pieces of Shrimp smaller than popcorn chicken and a biscuit. No dipping sauce at all. And around 15 fries... We were VERY disappointed! It looked NOTHING like the ad which showed an overflowing box! I took pictures of the "meal" for when we send in a complaint!

Damn. It seems like this promotion is becoming one of Popeyes' biggest misses. Has anyone actually HAD the sauce yet?

It has been my experience in recent years that Popeye's almost never has their promotional sauces in store no matter where you are. It's weird and frustrating.

That's certainly what I'm starting to realize. There is one unit in Alhambra that seems to do a good job, but the closet one to me, in Pasadena, almost never quite has what they're promoting.