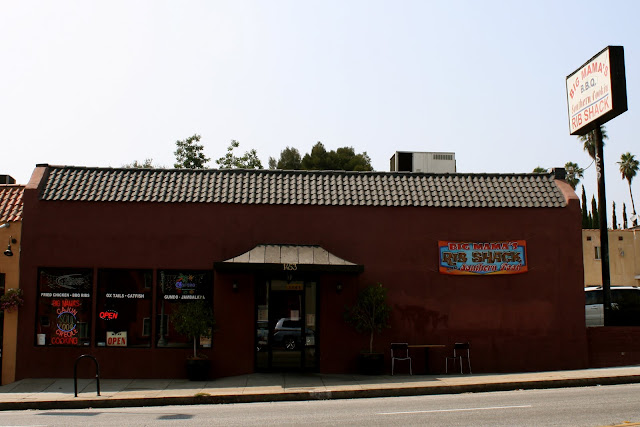 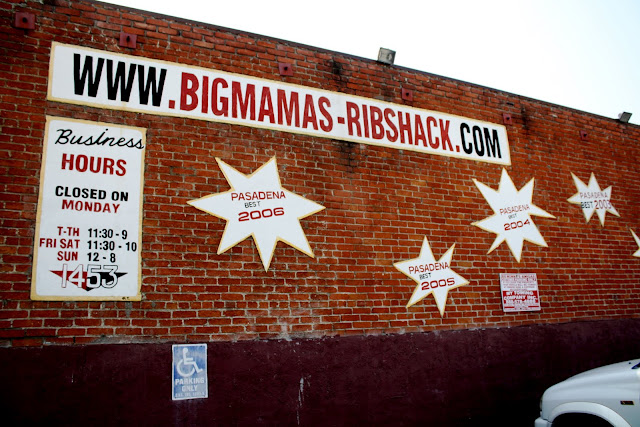 In my mid-20s I used to go out to eat a lot with friends. Several times per month I ended up at group meals, usually at dinner, but sometimes at lunches that someone (often I) had arranged. As often happens in these circumstances, the thing I remember most about the meals was the company, not the food.

This is not a complaint. I'd much rather remember the time I burned my mouth at Din Tai Fung, not the dish on which I burned it. I'd been warned by my friends that it was going to be boiling hot but I was too hungry to heed their advice. I'd much rather remember watching Kobe's ridiculous dunk over Yao and the way all my friends exploded out of their seats at Crown City Brewery, not the appetizers we had on the table in front of us.

I once had a very enjoyable meal at Big Mama's Rib Shack up on Lake Avenue, a Sunday afternoon lunch with almost a dozen friends. I remember the poor beer choices; I remember that we all went to the Rancho afterwards for a couple of games of pool; I remember going to Old Town with everyone that evening. But I don't remember what I ordered or how it tasted. For years, I thought of Mama's only as a place where I once had a great meal, even though I didn't actually remember anything about it.

The other day I was helping my mom with something up on Lake Ave not far from Big Mama's and I got really hungry. It was still on the early side but I'd been working for hours and needed food. She said we could go anywhere I wanted. I suggested Big Mama's.

If you've been to the South, you will understand what I mean when I say it was very Southern. We got there at 11:40; the sign says they open at 11:30. The doors were locked. We waited for a couple of minutes, and just when we were about ten seconds away from going next door to Pinocchio's, a friendly woman came and unlocked the door.

"Sit wherever you like," she said. "Give me a minute and I'll turn on the lights."

We sat at a table in the dark. When the lights came on we noticed how dirty the table was and we chose another. The woman - perhaps one of the owners - cleaned off all the tables and took our order. (A waitress stumbled in around 11:50, although I could not tell - either from her demeanor or that of the other people - whether she was ten minutes early or twenty minutes late.) 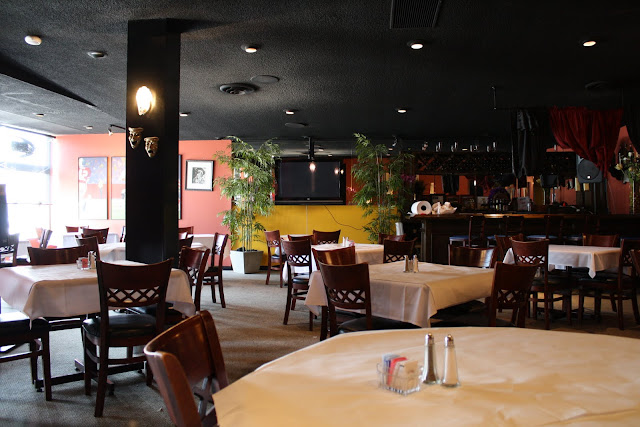 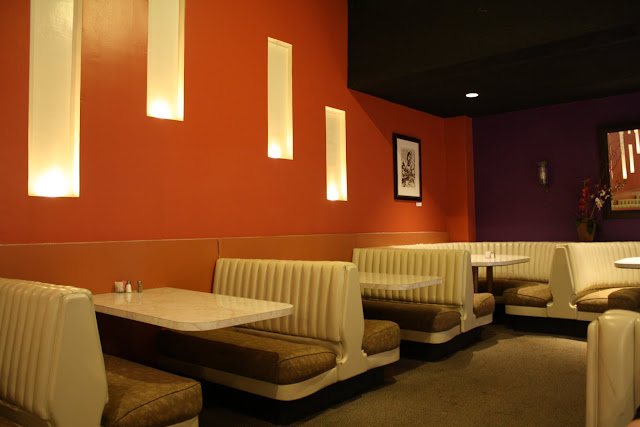 "It looks like a Chinese restaurant," my mom said. 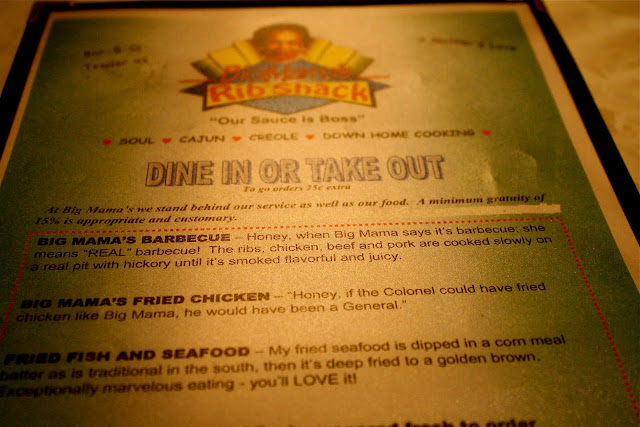 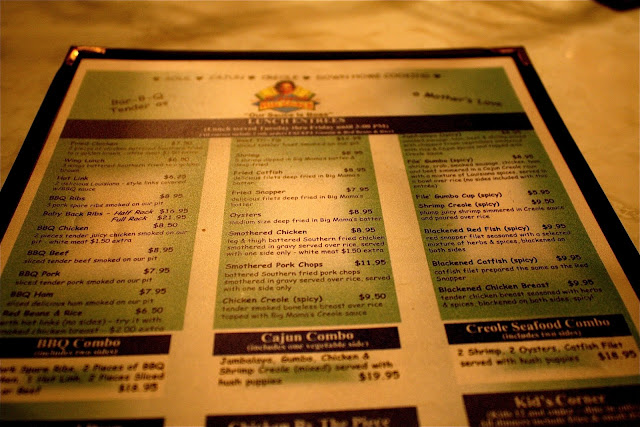 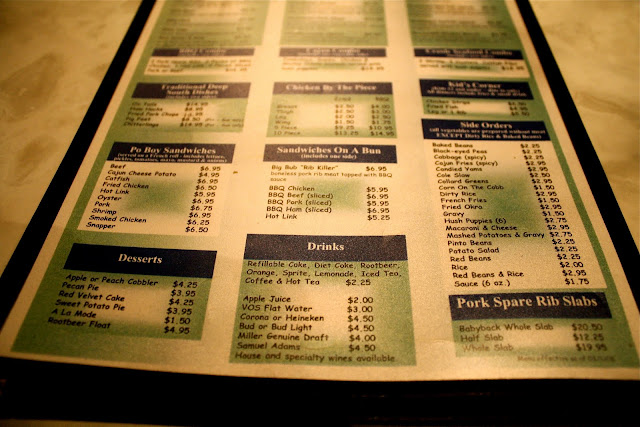 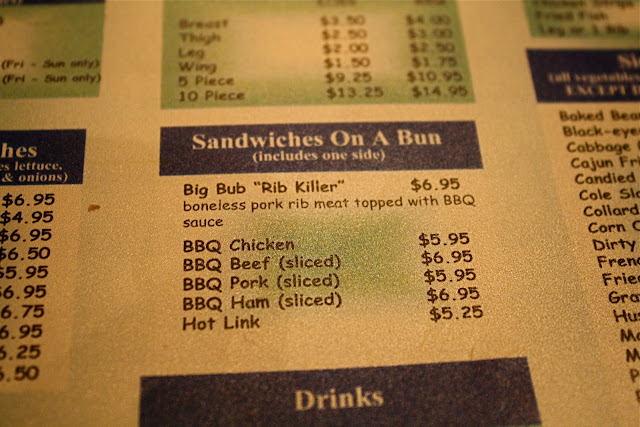 The lunch entrees each come with two sides; the sandwiches with one. I was leaning towards getting a shrimp po' boy but decided just to order the shrimp plate so that I could get the extra side. My mom ordered the Big Bub "Rib Killer." 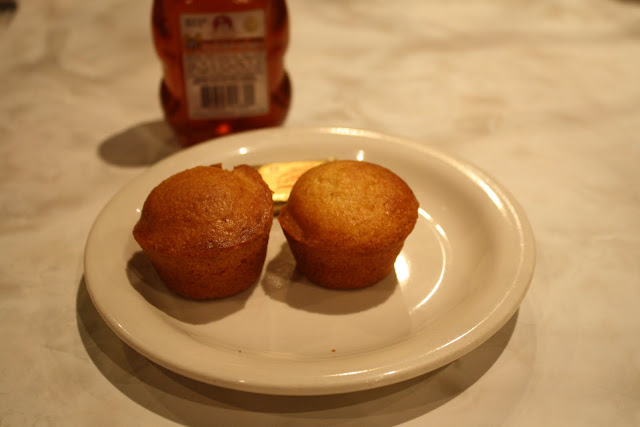 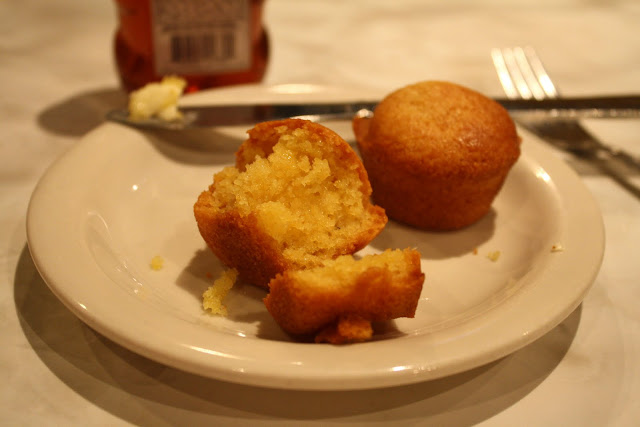 We were each brought two tiny corn muffins. They were fine - a little on the hard side, but flavorful.

While we waited for our food, a man who appeared to be one of the owners and another woman sat ten feet away from us and talked loudly about the restaurant's finances. I won't go into details, but let's just say I would have preferred not to hear the discussion, particularly while waiting for our food. (If this were an episode of Kitchen Nightmares, this would be the point where Gordon Ramsay comes storming out from the kitchen yelling "What are you doing? You don't talk like this in front of customers, you donkey!) 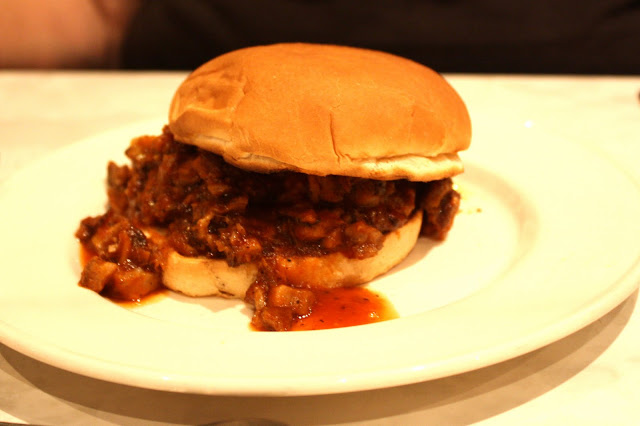 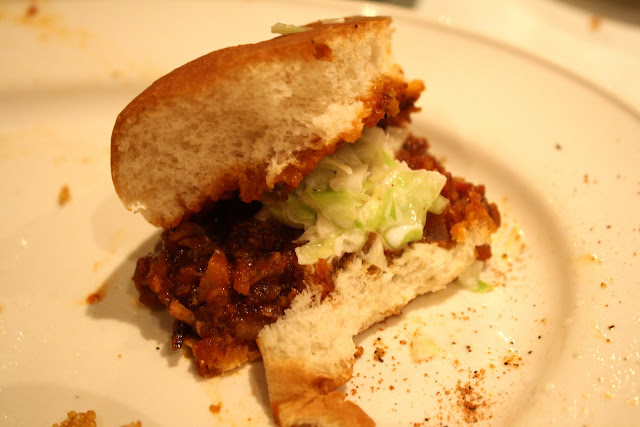 My mom's Rib Killer was attractive in that so-messy-it-looks-delicious way: pieces of pork pouring out the sides of the sandwich, drowning in sauce. (It's actually a very tasty sauce, though.) The "boneless pork rib meat" contained two pieces of bone, each the size of a tooth. My mom couldn't finish the sandwich so she gave me a quarter of it; I topped it with some of her slaw. The slaw was lousy, it tasted just like KFC's slaw: runny, buttermilk-y, much too sweet. At a barbecue restaurant, I would call this sandwich disappointing. But Big Mama's is more of a soul food restaurant that happens to serve some barbecue, which makes this sandwich more acceptable. Well, except for the bones. 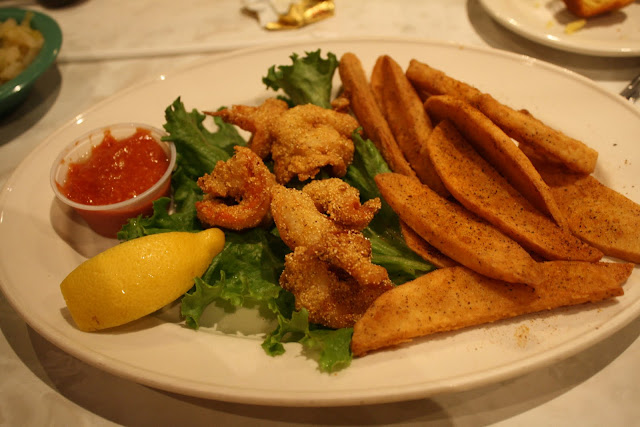 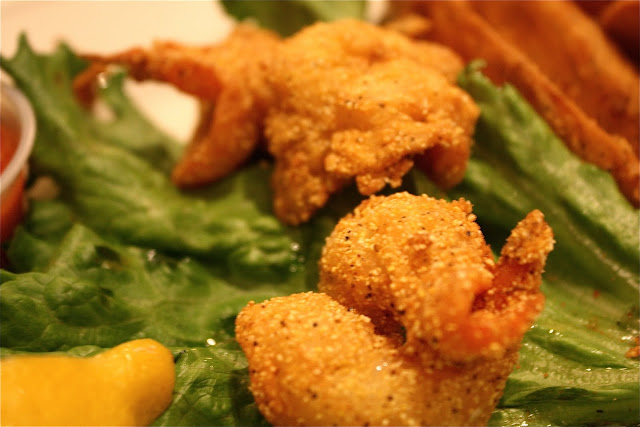 The menu told me the fried shrimp lunch would have five shrimp on it. I guess I expected each shrimp would be larger than a quarter. I mean, they were tasty, but it took me about 90 seconds to consume them. True, the plate came with two sides and was only seven dollars, but just down the street is the Pasadena Fish Market, which charges less and gives you lots more food. 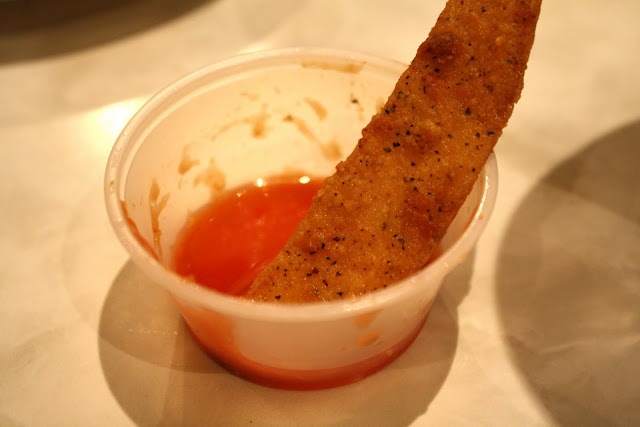 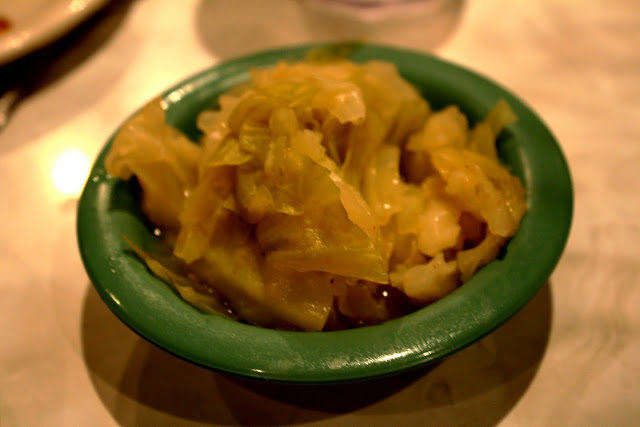 For my two sides I requested cajun fries and spicy cabbage. The former were spiced, thick wedges of potato that I dunked into hot sauce. I liked them fine. But I really liked the spicy cabbage: limp, vinegary cabbage pieces with lot of pepper. It was very spicy. (It's always a pleasure to see a menu item described as "spicy" and then actually have it turn out to be spicy.)

I want to like Big Mama's. They were friendly, their beer selection is much better than it used to be (although I only drank water with this meal), and it wasn't too expensive. But it seems like a restaurant that is just going through the motions: not opening on time, not cleaning the tables (nor turning on the lights) until customers are already seated, and airing their problems in full view of customers - the only two customers they had. And the food was only average at best.

I probably should have just left Big Mama's as a memory. Even if it was a memory where I didn't remember the food.
Posted by JustinM at 12:21 PM

oh lord I love the name Big Mama's. Back in my 20s I used to work in retail banking and there was a lady who'd come in (always wearing a mumu) who was referred to as "Big Mama" ... even the mumu did NOT hide here bodacious curves. Too bad this place didn't wow you. Looks kinds of sad from the photos and the disillusioned menu.

By any chance do you have Big Mama's phone number?