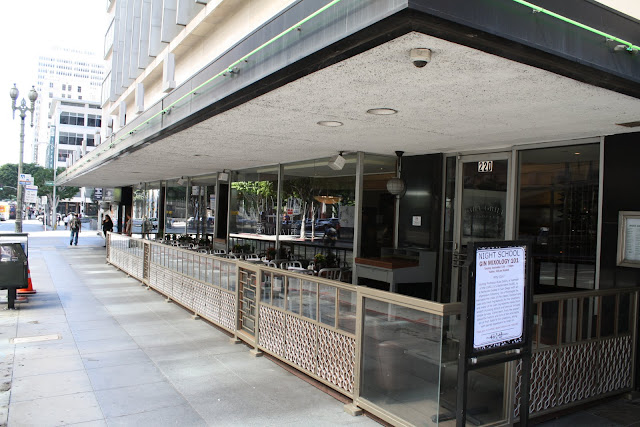 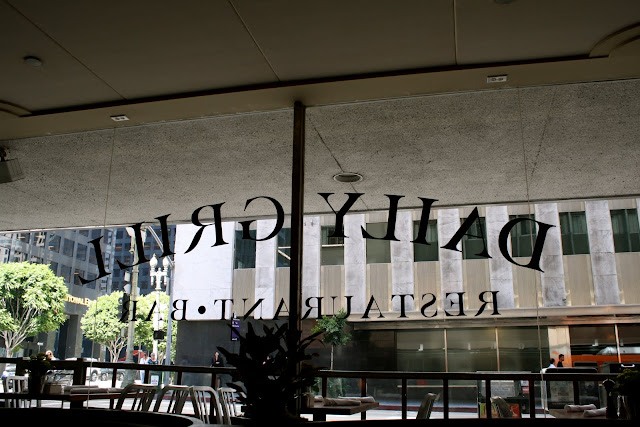 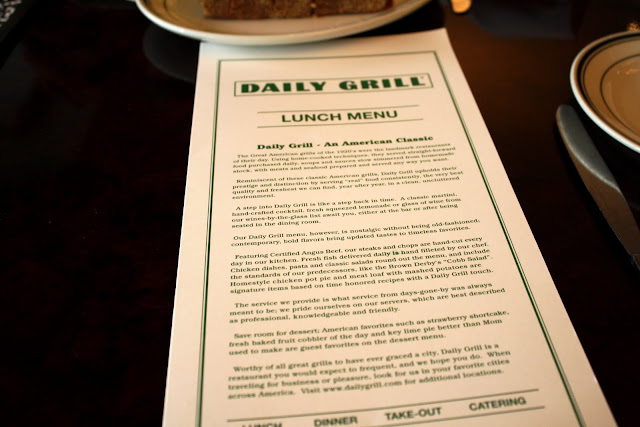 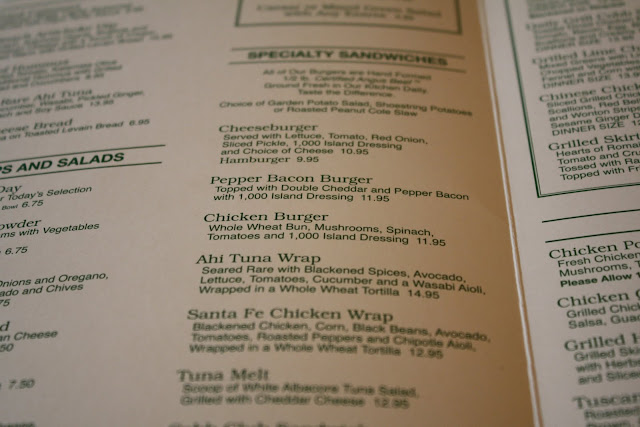 I've only eaten at a Daily Grill once in the last 8 years - at LAX, where I received probably the worst service I've ever experienced. But treating that location as representative of the whole chain never felt quite right to me. My friend Tim told me for months that he's never had a bad experience at the Daily Grill, and the other day he offered to take me to the downtown location - at 6th and Flower - for lunch, telling me that I had to try the Pepper Bacon Burger. 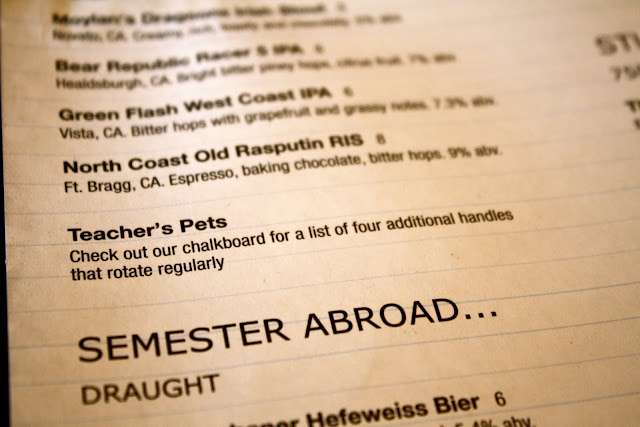 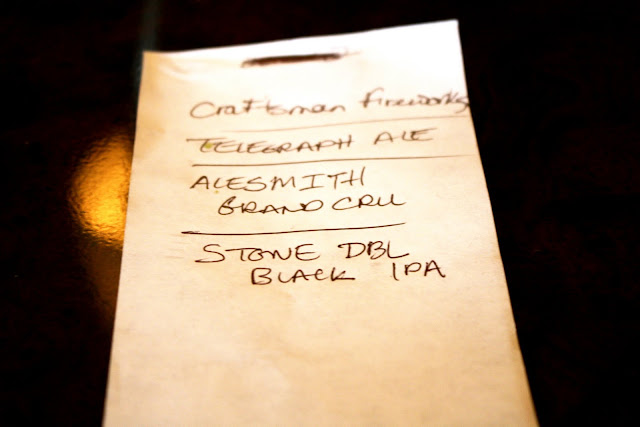 Tim asked if I wanted a beer. It was over 100 degrees downtown and I said yes. The beer list was comprised exclusively of craft beers. (I have no problem with that, though I won't lie: an ice cold Pacifico sounded better than anything.) There was also an entry that promised four additional beers are always on rotation.

"What are the other beers?" I asked the server when she eventually arrived at our table.

"They should all be on there," she replied. I pointed at the menu. "I'll go find out," she said, and came back with a handwritten list for us. 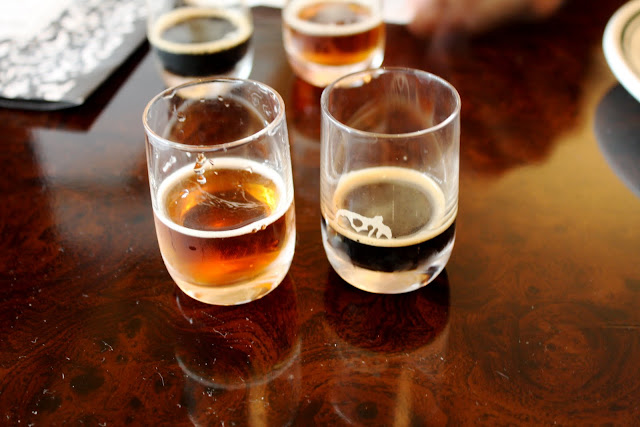 The general manager, who recognized Tim from a whiskey tasting Tim once taught in the bar, brought us samples of two of the beers: the Alesmith Grand Cru and the Stone Double Black IPA. These are extreme beers. The Grand Cru was too sweet for me (although not as sweet as I'd expected) and full of subtle flavors, the kind of beer that beer snobs drool over. The Double Black IPA was, like most Stone beers, aggressive, tasting of charred malt and coffee. One ounce of it and I was ready for a nap. 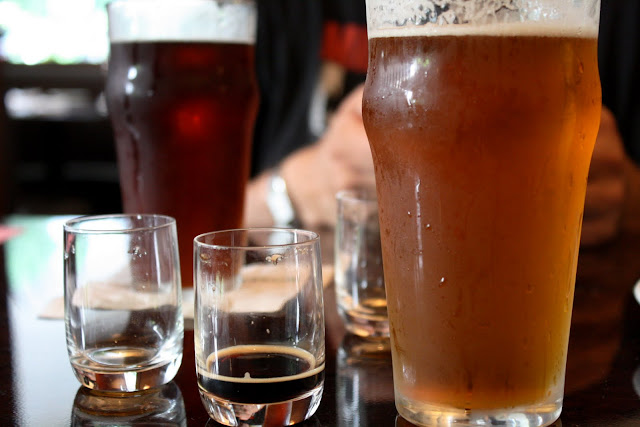 I went with a Bear Republic Racer 5. In the background there, Tim had a pint of the Alesmith. 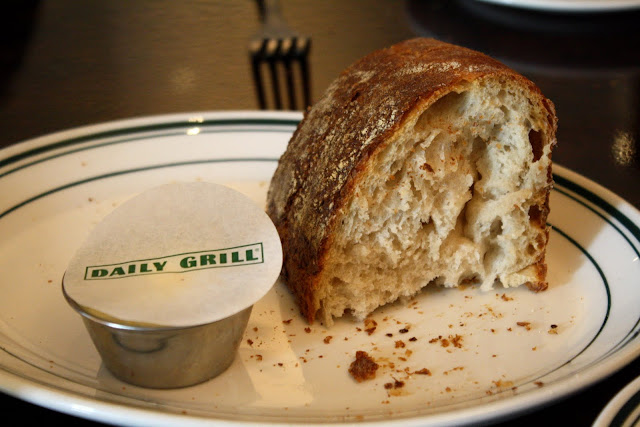 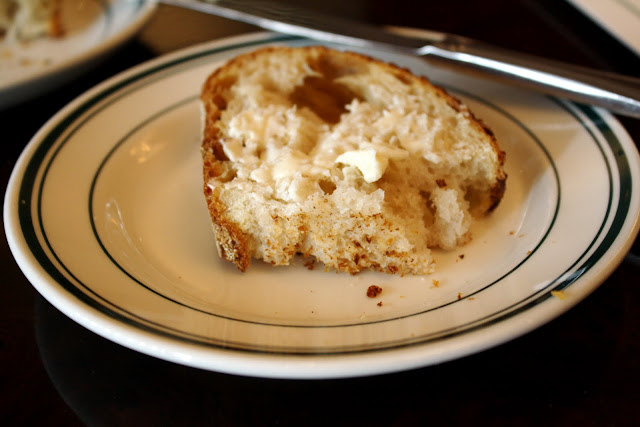 The bread smelled great. "This bread is really good but it's so filling," Tim mentioned. So I wasn't going to try any. But nobody took our order for almost 20 minutes, and I needed something, so I took a slice. It was indeed quite good. 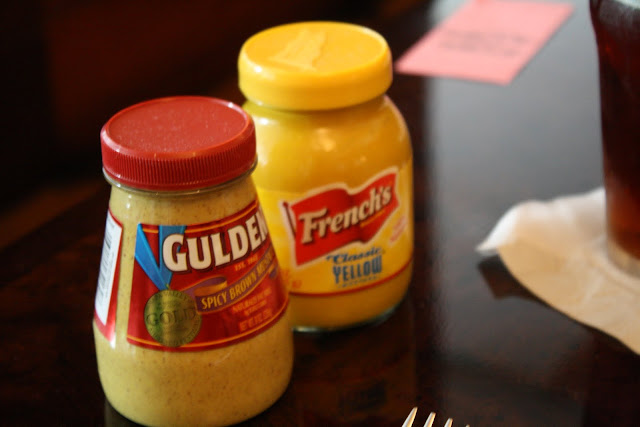 After we'd each ordered the burger, the waiter brought over two jars of mustard and placed them on the table. Mustard is my favorite condiment, so I'm not going to complain, but I knew if the Pepper Bacon Burger was as good as Tim described, no condiments were going to be necessary. 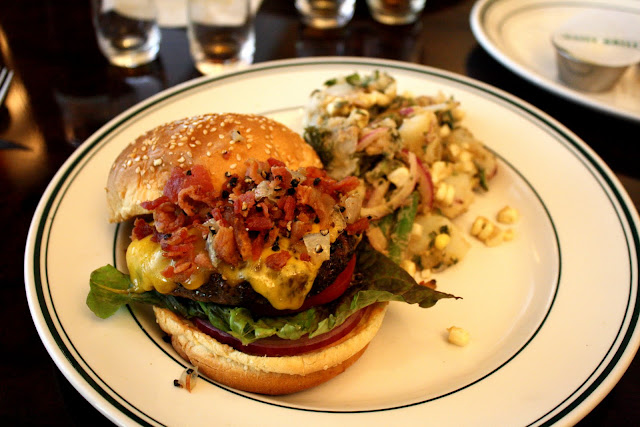 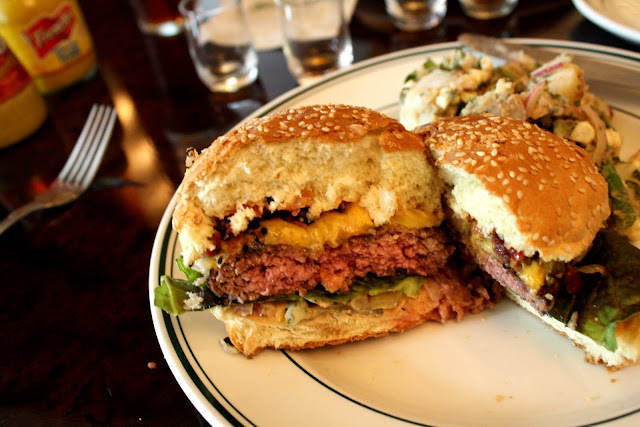 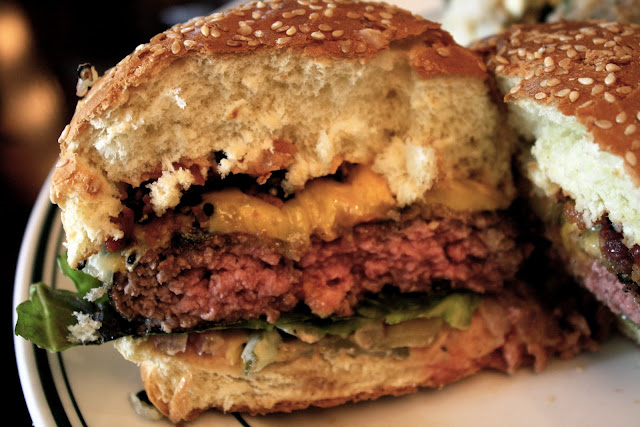 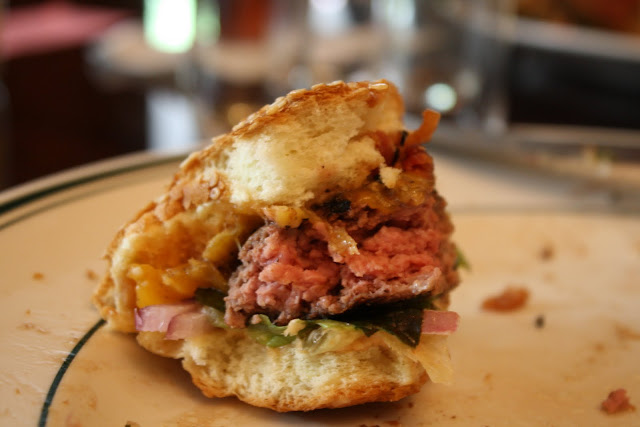 And here it is. (While it took them 20 minutes to take our order, our burgers arrived in less than half that time.) At first, Tim expressed surprise, saying that he has only had it at the Studio City location, where the bun is brioche (which sounded better to me) and the bacon is in strips, not crumbles (which sounded worse to me). But, whatever, I took a bite. It was very good. Daily Grill grinds their meat in-house every day, and that difference is appreciable. The meat is very juicy, and bursting with flavor. I had ordered my burger medium-rare, but this meat was so good I almost wished I'd ordered it rare.

The bacon was cooked perfectly, neither undercooked nor too crispy. And there were plenty of cracked peppercorns in it. I tasted them at the time and I tasted them for hours afterwords. Even that night I was noticing tiny pieces of pepper lodged in my teeth.

The only thing I didn't really enjoy about the burger was the addition of Thousand Island dressing. It didn't bring anything to the table. Really I would have been happy with just the meats - the beef and the bacon - as those flavors were great, though the cheese, red onion and lettuce (I removed the slice of tomato) were nice complements. But a burger this juicy doesn't need any sauce. 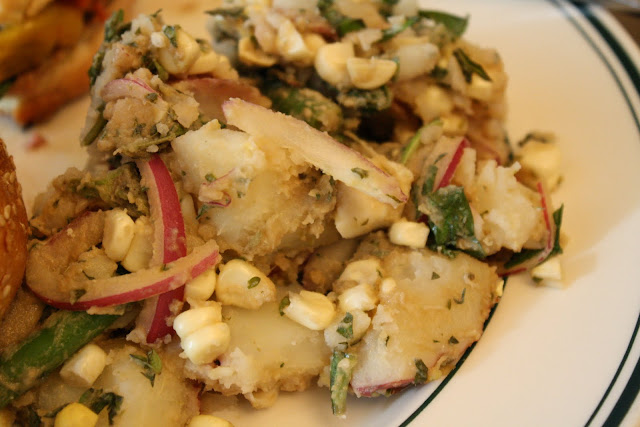 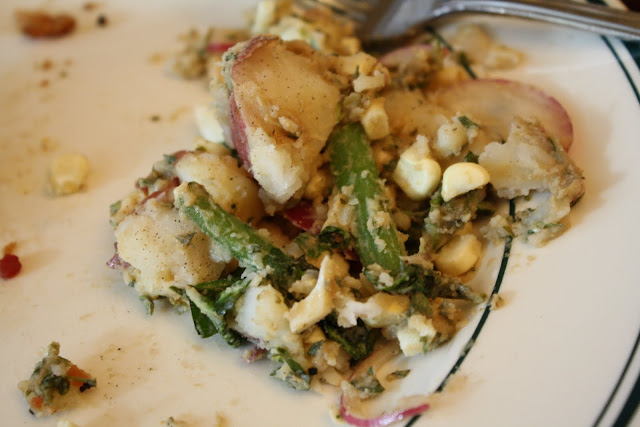 The burger comes with your choice of three sides: shoestring fries, garden potato salad, or roasted peanut cole slaw. I opted for the potato salad. I wasn't sure what "garden" indicated, until I got the plate. There were more ingredients in this than I have ever seen in a potato salad: potatoes, dressing, red onion, corn, arugula and green beans. It was good but those green beans were distracting; there is no mistaking the crunch and texture of a green bean, and I did not enjoy it in this potato salad, particularly because the other flavors all worked well together. 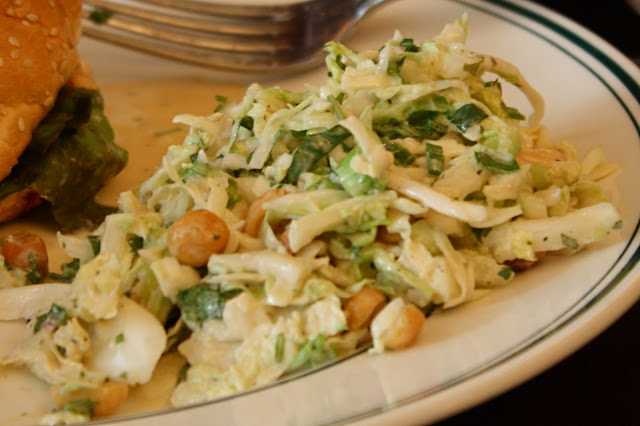 Tim opted for the roasted peanut cole slaw, and he offered me a bite, but I declined. I'm not a big fan of peanuts and Thai-style slaws have never been my favorite.
I enjoyed our lunch at Daily Grill. I won't be making a habit of going there, but that Pepper Bacon Burger was delicious. Next time I will probably eschew the beer for an iced tea and order fries as my side, but I will definitely be getting that burger again.
Posted by JustinM at 11:41 AM

That burger looks great. I am a rare beef person, but that med rare looks acceptable. And I'm sure I'm not the first to say this, work on the tomato/avocado thing. Annoying right?

Nah. People I don't know don't have the power to annoy me. Well, except Tobey Maguire. I will eat tomatoes under some circumstances, but never avocado. Tomatoes look disgusting, but their taste is inoffensive. But avocados are not only hideous looking, I hate their taste.