Guinness Sliders & The Mystery of the Missing Frosting: Weekend Eats 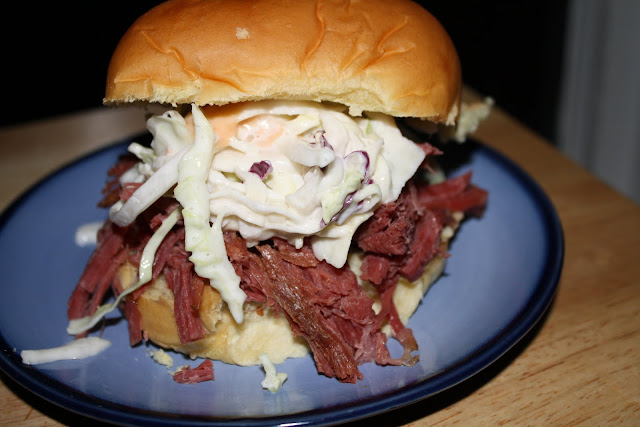 Elizabeth had to work some really long hours last week so I decided to make her whatever she wanted for dinner on Friday night. She mentioned that corned beef sandwiches (like I made a month ago) sounded really good to her. I slow cooked a corned beef all day, then made a sandwich topped with slaw and some Russian dressing. The sandwiches weren't as good as the ones I made last month - the meat just wasn't as tender and the corning spices were much saltier this time around. But it was still good. 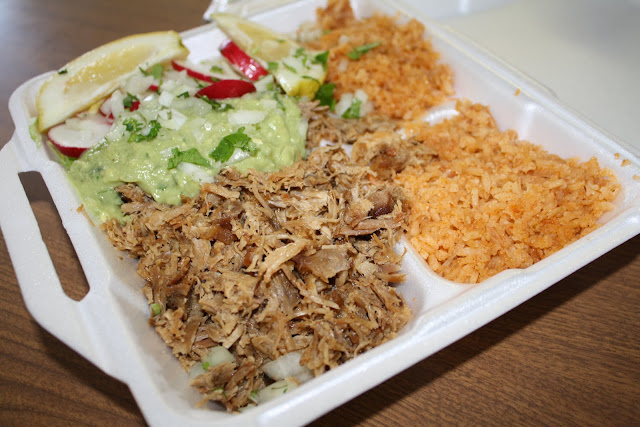 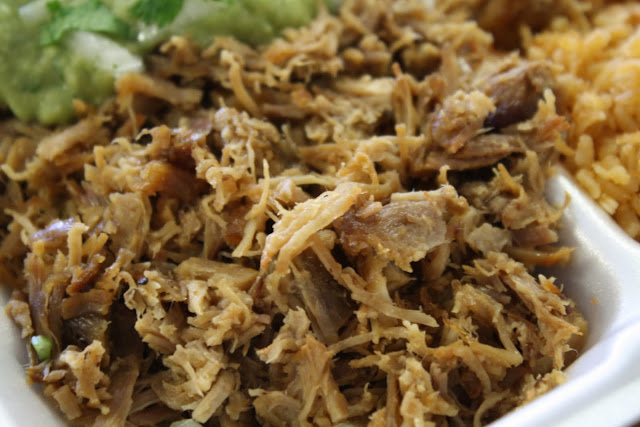 After having the Del Taco carnitas tacos the other night, I mentioned that I doubt I will ever have them again as long as El Taquito Mexicano is close by. Elizabeth couldn't exactly remember what El Taquito's carnitas are like, so for lunch on Saturday we went there. This is her carnitas combo plate: rice (she opted for double rice instead of rice and beans), guacamole, radishes, lettuce, and a pile of carnitas larger than a softball. All for $6.50, and all of it great. 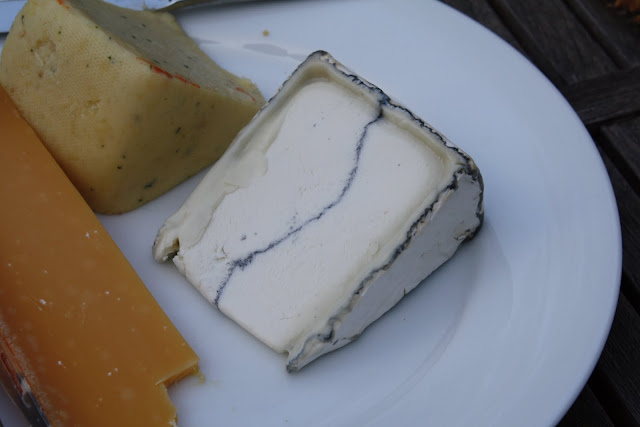 Saturday evening I went over to my friend Dave's for a barbecue. Our friend Geordie Mick was in town for the first time in a couple of years and we wanted to have a party. Carla brought cheese, as usual, including my beloved Humboldt Fog, but I was busy cooking and didn't get to eat any. (My fault - I was obviously not too busy to take a picture of the cheese, so I probably could have found the time to eat some.) 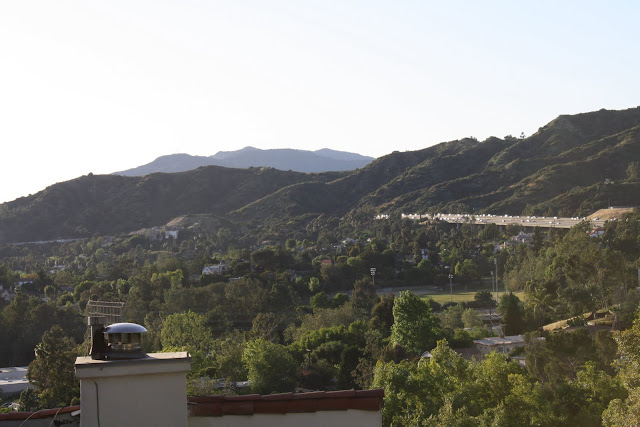 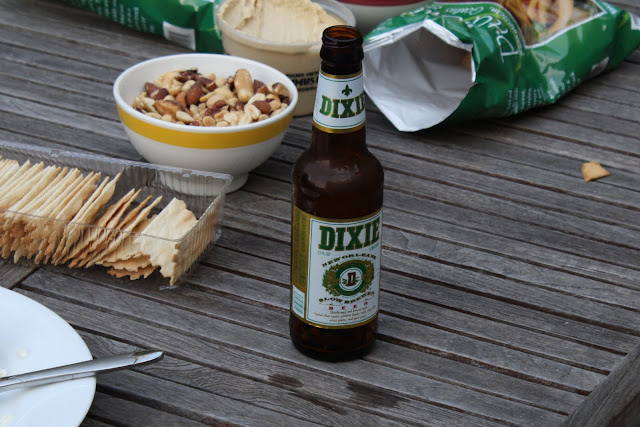 Bryce had his first Dixie Beer and proclaimed it delicious, which made me quite happy. 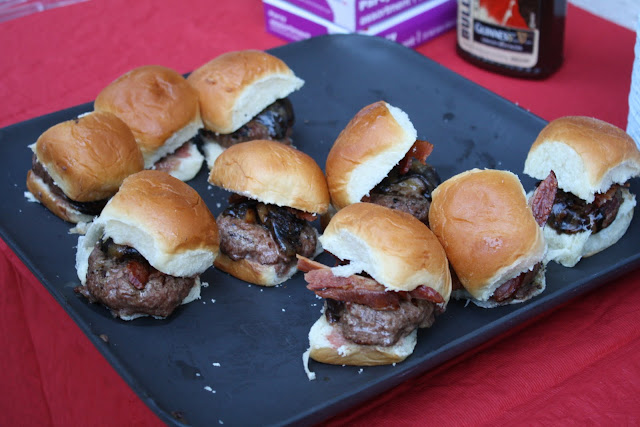 I made sliders, putting down a plate of 18. By the time I'd turned around and picked up my camera - maybe 5 seconds - half of them were gone. 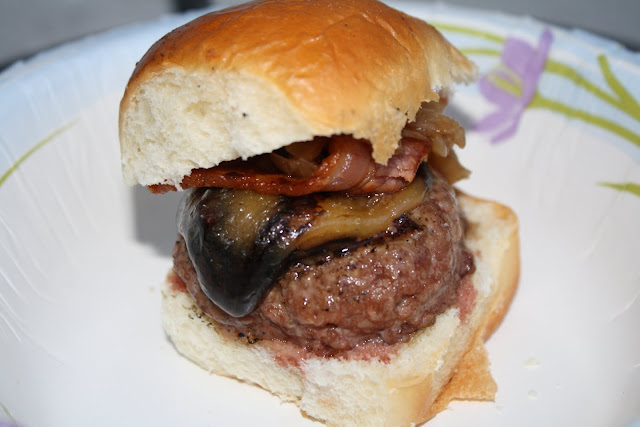 And this is why: they were freaking delicious. I grilled the patties (for my birthday a couple of months ago, my parents bought me a slider press that makes forming your own slider patties very simple), melting some cheddar with porter on top, then adding a piece of thick bacon to each. And... 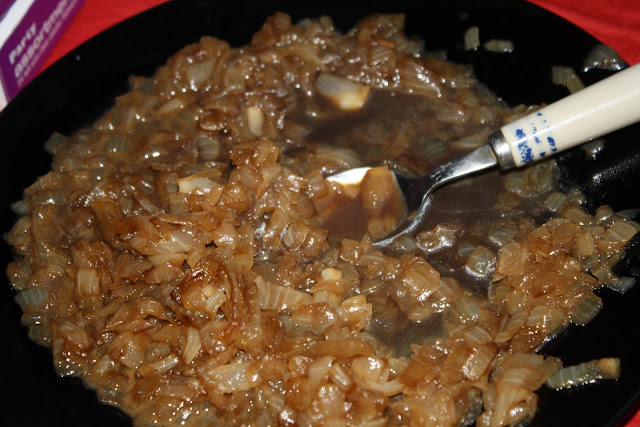 Some onions that I caramelized with butter and Guinness. 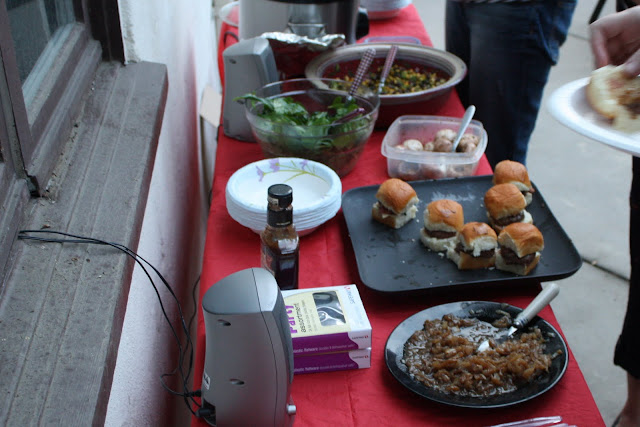 Nothing I have ever cooked has disappeared as quickly as those sliders. All 18 were gone within two minutes and I had to make another batch. I'd put out a bottle of Bull's Eye barbecue sauce (with Guinness in it, of course) in case anyone needed some extra flavor to their sliders, but I don't believe anyone used it.

Murph put his hand on my shoulder and said "Those were the two best sliders I have ever had in my life." 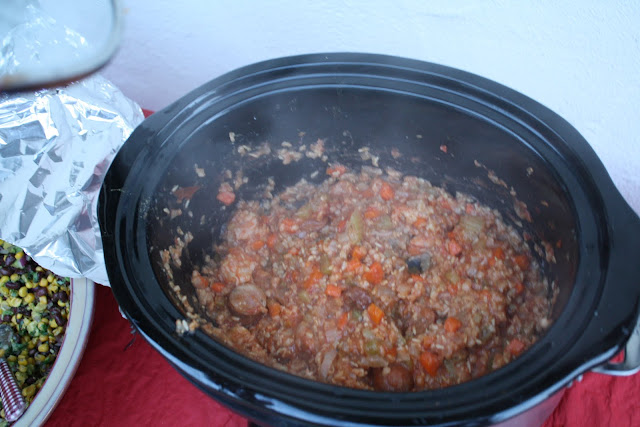 Rachel made jambalaya that was the best I have had in years. 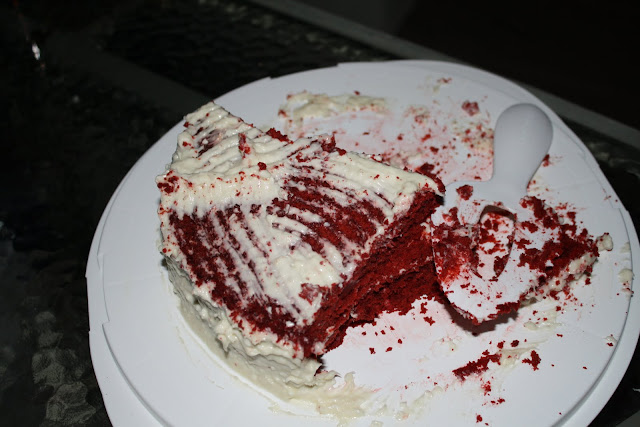 Alan made a fantastic red velvet cake. But at one point someone yelled out "What the hell happened to all the frosting?" Everyone inspected the cake. The frosting on top had been raked clean. Nobody could figure out what had happened. 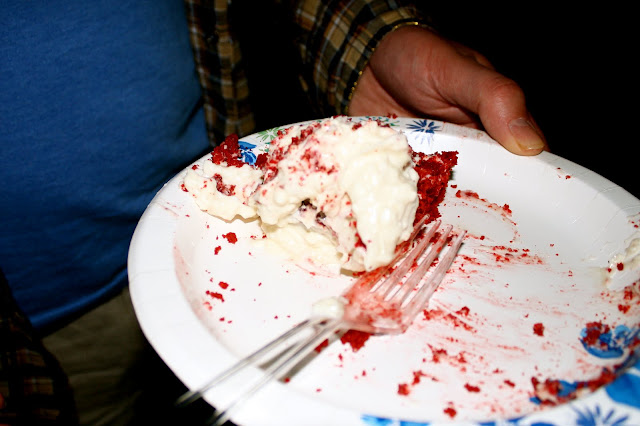 And then I noticed that Murph had a hunk of frosting on his plate the size of a fist. "But I left plenty of frosting on the side of the cake!" he exclaimed. 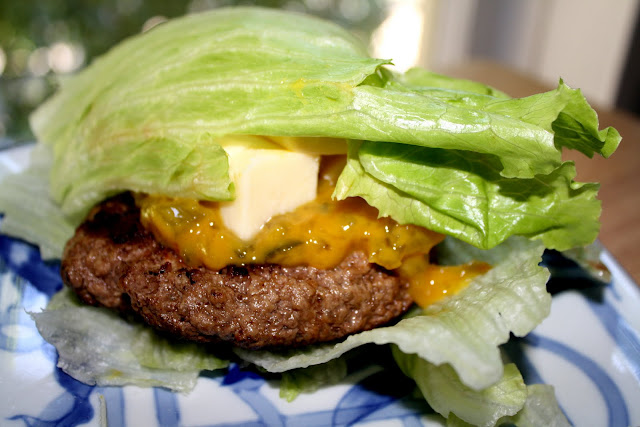 I asked Elizabeth what she wanted for lunch on Sunday and she said "A burger." I asked if she wanted me to make one or get them from somewhere and she said she didn't care. Luckily I had some ground beef in the fridge so I was able to make a couple of patties. But we only had one bun left. So I let her have it and made mine protein-style - wrapping it in a few pieces of iceberg lettuce. I topped my patty with E. Waldo Ward's mustard relish (probably the best mustard relish I have ever had) and some Irish white cheddar. It was very good... but it would have been better with a bun. 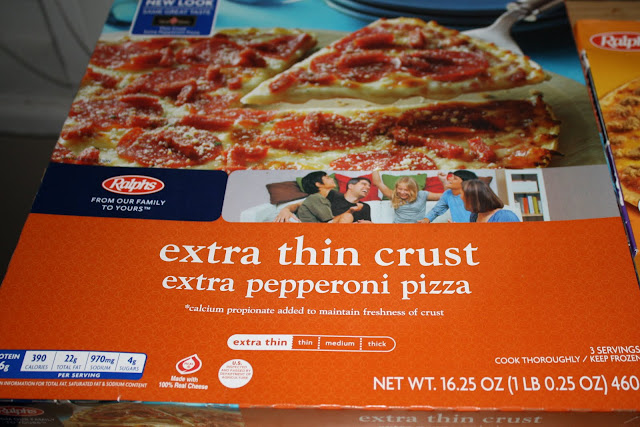 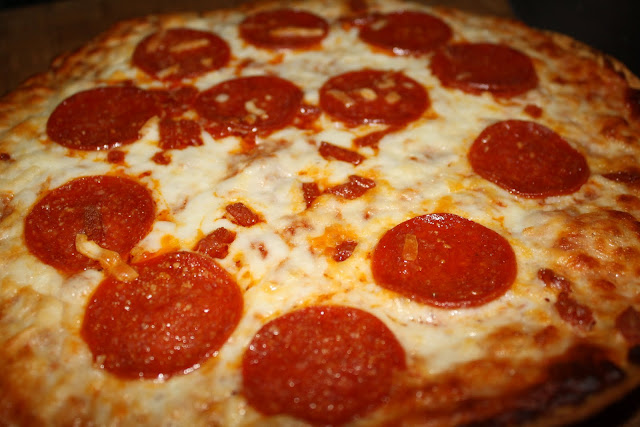 For dinner Sunday night, I wanted something easy. I felt like having frozen pizza; it doesn't get much easier than that. Ralph's brand thin-crust pizzas are pretty good and always on sale. This one was three dollars and change. The pepperoni was nothing special but I really liked the sauce. Sure, it's not as good as a pizza made on the grill, but it takes ten minutes in the oven and requires no clean up. That's all I was looking for last night. 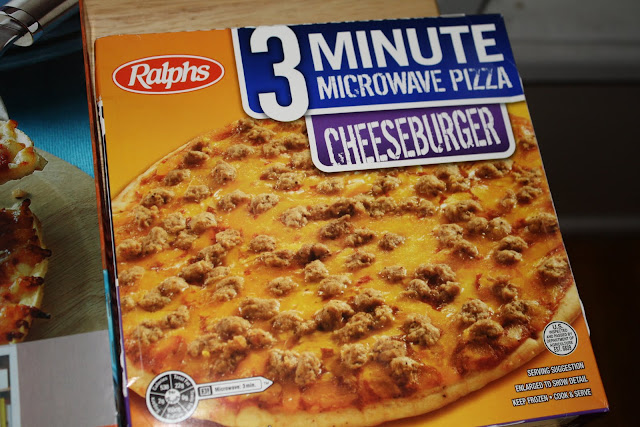 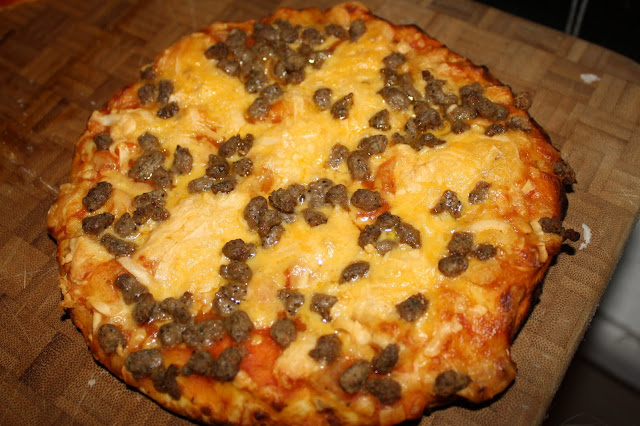 I got a "cheeseburger" pizza as well, for two reasons: 1) It was on sale for $1, and 2) I was curious what the hell a cheeseburger pizza is. Apparently it's a pizza covered with lots of oily, neon-orange cheese and some kind of a beef topping resembling rabbit poop. 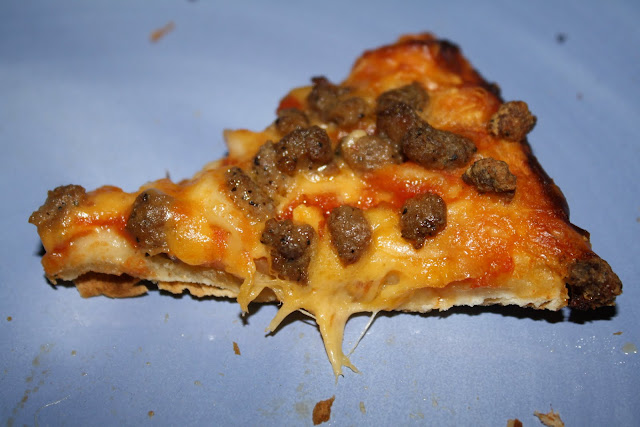 Not surprisingly, it did not taste like a cheeseburger. 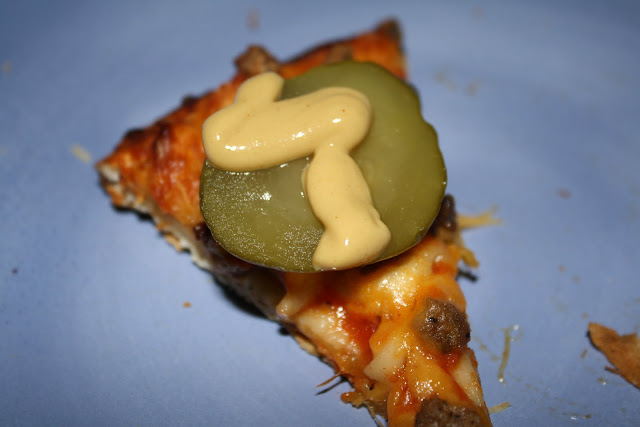 Not even when I added a pickle and some mustard.

murph FTW! and where da action shots at, playboy???

Seriously, you have to love someone who doesn't feel that such an act constitutes a party foul on his part.